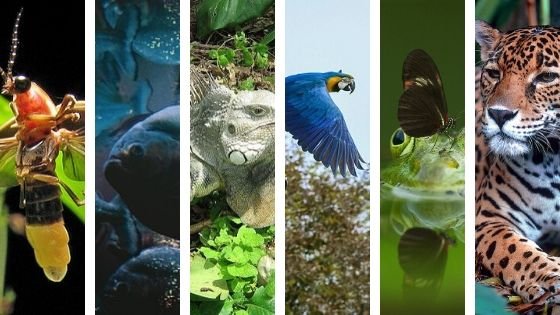 The Amazon is the largest tropical rainforest on the planet. It’s a megadiverse geographic area delimited by the Amazon River basin , which is shared by at least 6 countries: Bolivia , Brazil , Colombia , Ecuador , Peru and Venezuela . Although some authors include 3 others: Guyana, Suriname and French Guiana.

The Amazon Rainforest Animals biodiversity (or number of species) is greatest for small animals, such as insects , amphibians , reptiles , birds , and fish .

On the other hand, this diversity is lower for large animals with longer gestation periods, such as many terrestrial and aquatic mammals , which tend to be the most vulnerable and are threatened by human activities. Among them we find cats or felines such as the jaguar , aquatic mammals such as the pink dolphin, and equids such as the Amazonian tapir just to name a few.

Towards the second half of the 20th century, specialists worldwide estimated the total number of animal species at 1.5 million.

However, after visiting and studying the beetles of the humid forests of Central America and later of the Amazon, the curator of the department of entomology of the Smithsonian Institution Terry L. Erwin calculated in 1982 that in the world there must have been more than 30 million species counting only insects .

Where is it found, why is it lethal? When was clistopyga crassicaudata discovered?

How big is a giant beetle? What does it feed on? Reproduction of the titanus giganteus, where does it live and what is known about this species?

The suri, chontacuro or larva of the Rhynchophorus palmarum beetle, is a plague, a super-food and even a medicine for the indigenous people of the Amazon.

With its more than 2,000 registered fish species, the Amazon basin exceeds the number of fish species in the entire European continent by more than 10 times.

The Santa Cecilia region, in the Ecuadorian Amazon , boasts the highest number of amphibian species per square kilometer in the world. Amphibians include anurans such as toads or frogs, caecilians and newts. In the Amazon rainforest, the dart frogs stand out because of its deadly poison, but there are also introduced species such as the bullfrog, and other species of poisonous frogs such as the famous Kambo frog, which is considered the ayahuasca of the animal kingdom.

Peru, Colombia and Brazil are among the top 10 countries with the greatest biodiversity of mammal species on the entire planet.

In this group of animals we find emblematic species of the Amazon jungle such as the jaguar and the pink dolphin. But also other felines such as the ocelot, and other aquatic mammals such as the river manatee.

The existence of giant animals such as the giant armadillo, the capybara, chiguiro or capybara, which is the largest rodent in the world, the giant otter , never ceases to amaze us.

Another large subgroup within the mammals are the monkeys or primates , among which we find the famous marmoset monkey, the capuchin monkeys, the spider monkey, the howler monkeys among others.

Lowland Paca or Agouti Paca (Cuniculus paca) it is a large wild rodent, the second largest rodent in the jungle, after the capybara

Priodontes maximus: Taxonomy and characteristics, behavior and reproduction, what does the cachicamo eat? Is it in danger of extinction?

Giant otter: characteristics, reproduction and behavior, what does the giant otter eat? is it in danger of extinction? ethnozoology

Description, habitat, groups, feeding, where does the marmoset live, reproduction, behavior. Differences with other species.

The jaguar (Panthera onca) is the largest feline in the Americas and the third largest in the world, after the Asian tiger and the African lion. Read more…

In the Tambopata reserve in Peru they hold the world record for the greatest diversity of bird species in the same place. Some of the bird species found there are:

The city if Iquitos, in the Peruvian Amazon Rainforest, holds the world record for the greatest diversity of reptile species ever documented. This group includes the turtles, the snakes and the famous alligators of the Amazon Rainforest, the yacaré, the white and the black.

Arachnids are not insects as we might think. Spiders form a separate group of animals including the dreaded scorpions.

A selection of 10 rare animals of the Amazon: the world’s largest rodent, the pink river dolphin, giant armadillos and beetles, and more