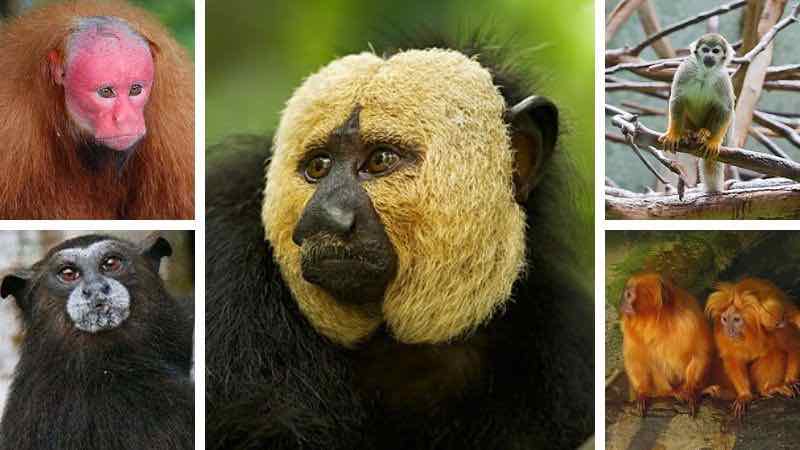 The Amazon rainforest monkeys form a very diverse and motley group of primates, some of whose species and subspecies are endangered due to human predation.

On the one hand, Its habitat is constantly and rapidly shrinking as fires and deforestation advance in the world’s largest tropical rainforest.

And on the other hand, they are also subjected to intense hunting not only for the pet trade but mainly by indigenous groups who have them on their food menu and like to eat their meat.

Before these beautiful, clever and intelligent animals, victims of human unconsciousness, disappear from the earth, we bring you the 12 main Amazon Rainforest Monkeys.

They also call it a pygmy monkey because of its size, which varies from 28 to 45 cm. About 32 very similar species are known by this same common name.

The marmoset monkey has been included in Appendix I of the Convention for Trafficking in Endangered Species (CITES). They hunt it for food, and to sell the young alive as pets in the black market.

Of all the Amazon rainforest monkeys, the largest, up to 1.5 m tall, is also the most sought after for its meat, which some indigenous groups like to eat.

According to the Huaorani people, from the Ecuadorian Amazon Rainforest, the spider monkey meat is a delicacy. Among the Campa, Piro and Jíbaro ethnic groups, it is common to offer visitors the shirumbi as a treat.

It is a soup which special ingredient is the Ateles belzebuth whose head is part of the preparation.

The black maquisapa is a species of monkey with gregarious and arboreal habits. Its body measures about 75 cm, it has a long tail and its average weight is 14 kg.

Like its white-bellied relative, this species is seriously threatened as its meat is highly valued by the locals.

The hunting of these animals has also intensified due to the scarcity of other forest animals as a consequence of the environmental imbalance. ( Ramos-Fernández, G. 2008 )

Howler monkeys is a common name generally given to designate a large group of species of the Alouatta genus. Among them we have: A. palliata, A. pigra, A. belzebul, A. fusca, A. caraya, A. coibensis, A. guarida, A. nigerrima and A. seniculus .

They are better known by their vernacular names. People call them red howler monkey in Ecuador, araguato in Colombia and Venezuela , manachi colorado in Bolivia and Cotomono in Peru .

They howl constantly for different reasons. To indicate that it is dawn or that a storm is approaching, to intimidate possible predators, to mate or for hierarchical reasons. There are red and black fur.

Also known by their Quechua/Spanish names of Machín Negro and Machín Blanco, they are species of arboreal Amazon Rainforest monkeys of the Cebidae family.

Their bodies are covered with brown fur, and their heads with white or black fur depending on the species, resembling a hood. At 50 cm tall and weighing 4 kg, they are slightly larger than marmosets.

Both species are part of the food menu of some indigenous Amazonian ethnic groups. They are persecuted for their precious meat and are trade as pets ( Mittermeier, 1977 ).

Called Peruvian woolly, common woolly or pacorrunto, it is a tree-dwelling monkey that feeds preferably on herbs and fruits ( Stevenson, 1994 ).

The fur of this Amazon Rainforest monkey can be brown, dark red, or black. It measures around 70 cm high and its weight ranges between 10 kg.

It normally moves in groups of 5 to 25 individuals, and it is common to find it in the high forest. It has a long gestation period of 7 months, typical of large mammals.

Their species is considered in danger of extinction due to the strong pressure exerted on them by the indigenous groups that consume their meat.

This is another monkey of the atelidae family, closely related to the one described above. It differs from the common woolly by its yellow tail and its slightly smaller size.

It has a long tail that exceeds more than 5 times the size of its body, it is frugivorous with nocturnal habits and walks in groups of a maximum of 14 specimens. It is also known by the vernacular names of churuco in Colombia and woolly monkey, cushillo or chorago in Ecuador.

The occasional hunting of this species as a means of subsistence for food and for the trade of its young are some of its threats (Aquino R., 2017 ).

This common primate of the Peruvian and Brazilian Amazon Rainforest has a stocky appearance, long red fur, a hairless face, bald head, and a short tail compared to other Amazonian monkeys.

It generally inhabits the upper canopy of primary forest. Like all the previous ones, this species is also hunted for food, which is why it is classified as endangered (Bowler, 2009).

Similar in size to that of the marmoset monkey but with longer, hairy fur, for which it resembles a lion, this friendly species of Amazonian monkey is in danger of extinction.

Its population is estimated between 1,000 and 3,200 individuals, many of them protected in the Poço das Antas Biological Reserve in Brazil.

They are monogamous, they go in groups of 3 to 14 individuals and they reproduce in short gestation periods, typical of smaller mammals, of around 4 and a half months.

A curious fact about this little golden lion is that its image appears on the 10 reais bill in Brazil. It is hunted for the sale and trade of domestic animals.

The  brown-mantled tamarin (also known as pichico or bebeleche) is easily distinguished by its white fur around its snout that contrasts with the black of its body and makes it look as if it had been drinking milk from a glass. Another characteristic feature is its short, non-prehensile tail.

Its size is slightly smaller than other marmoset monkey species of the Samiri genus, but unlike those, apparently, none of the Saguinus species have been reported as “threatened” or “endangered”.

Their populations are very common throughout the Amazon Rainforest “trapezium” (triple national border among Colombia, Brasil, and Peru), in the lowlands of the Bolivian, Peruvian, Ecuadorian and Colombian Amazon Rainforest, as well as in the jungle of the western Amazon of Brazil.

Perhaps their success as a species is due to teamwork, as they are known to have a complex communication system that includes syllables, chirps, trills and screeches, to distract their predators (Maeda T., 1987).

In addition, they sleep piled up in the trees, giving the impression of termite nests, which also helps to mislead their possible hunters (Heymann, 1995).

This endemic species of Peru was on the verge of disappearing and is still in critical danger of extinction. Its total population of just 30 individuals ( reported in 2007 ) specifically inhabited the Amazonian department of San Martín, where the species was confined or isolated by large rivers.

The also known as Andean or Alto Mayo monkey was listed in 2012 among the 25 most endangered primate species in the world according to the IUCN (International Union for Conservation of Nature), the International Primatological Society and the Bristol Science and Conservation Foundation.

Their enemies are not only the systematic fragmentation of their habitat for livestock, agriculture and the lumber industry, but also hunting, since their meat is used as food and their individuals are sold as pets ( https://www.monotocon.org/ ).

There are about 16 species of monkeys of the genus Pithecia, commonly called saki monkeys or flying monkeys, all of them endemic to the Amazon Rainforest ( Laura K Marsh, 2014 ).

They are characterized by having abundant and woolly fur that gives them a corpulent appearance and by their short, non-prehensile tail.

They have great agility to move through the treetops making great jumps for which they receive their nickname of “flyers”.

In Peru and Ecuador, south of the Napo River, is the species Pithecia aequatorialis, with black fur with a white ring around its face.

The white or albino saqui ( Pithecia albicans ) is found in Brazil . In the Amazonian trapezium (Peru, Brazil and Colombia) the species of hairy saki ( Pithecia hirsuta ) with the longest tail is found.

Between Peru, Bolivia and Brazil inhabits the gray saki ( Pithecia irrorata ). The white-faced saki ( Pithecia pithecia ) is typical of the Guyanese jungle (English, French and Suriname) as well as northern Brazil.

Recently, one of the species of Amazonian monkeys least known by science was studied again, it is the species P. vanzolinii , which could be photographed and studied in 2017 by the director of the Laura Marsh Global Conservation Institute.

The species was first described in 1936 when the Ecuadorian naturalist Alfonso M. Olalla caught several specimens and sold them to the National Museum of Rio de Janeiro and the Zoology Museum of the University of Sao Paulo.

According to a National Geographic article, the last time this species had been reported was in 1956, more than 60 years ago.

Priodontes maximus: Taxonomy and characteristics, behavior and reproduction, what does the cachicamo eat? Is it in danger of extinction?

Giant otter: characteristics, reproduction and behavior, what does the giant otter eat? is it in danger of extinction? ethnozoology

Description, habitat, groups, feeding, where does the marmoset live, reproduction, behavior. Differences with other species.

Fires in the Amazon: natural and caused.of the canopy and understory. Increasing frequency. What is endangered when the Amazon catches fire?