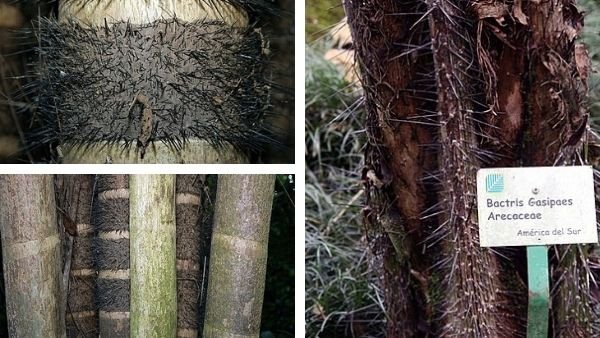 Chonta or pijuayo are common names used to denominate one of the best-known Amazonian palm trees and widely used by indigenous peoples or tribes throughout the Amazon basin. Its scientific name is Bactris gasipaes.

Clarification: other species of palm trees are commonly called “chonta”. Among them we can mention the species Ceroxylon alpinum or royal palm and the species Syagrus sancona.

In Colombia they call it chontaduro or chonta.

Marayáues its vernacular name in Bolivia.

It is a tall palm, up to 25 m tall, with a straight trunk, generally thorny, with thorns up to 20 cm long, depending on the variety.

It grows from sea level to more than 1,000 meters above sea level.

The wood of its trunk is very hard and is used to make bows and arrowheads, as is the case with the Yanomamo (VEN), who are experts in climbing the palm using stirrups to avoid its thorns.

Fishing rods, harpoons and wood carvings are also made from its hard trunk.

Its fruit is a drupe, which comes in a cluster, which agglomerates about 100 units and weighs about 15 kg.

The drupe, ovoid or conical in shape, is green, yellow, orange or red.

The seed is unique, hard, conical, dark in color, with a white almond, edible, with a flavor similar to the pulp of the green coconut.

The fruit is edible, after being cooked and peeled.

The pulp, orangein color, has a flavor reminiscent of potatoes and European chestnuts.

Gastronomic uses of the fruit

The fruit of the palm known as chonta or pijuayo is crumbled to prepare juices and ice creams, and is also used as the main ingredient to make masatoor flour, or to extract its oil, which is yellow in color.

The flour is used to make cakes and breads such as arepas.

The remains of the fruit are used as food for animals, especially pigs.

Its caloric intake of 194 kcal. Chonta or heart of palm is obtained from its inflorescences, with a pleasant flavor and highly valued commercially.

On its fallen and rotten trunks grows the suri (Rhynchophorus palmarum).

From its leaves, used to roof houses, a green dye is also obtained to dye clothes.

From its sap a liquor is made.

It is a palm that, despite having been used in the Amazon for several thousand years, has not been found in the wild, so it is used, among specialists, as an indicator that, where it is found, there was once human settlement.

It is one of the most important palm trees in the Amazon, due to the numerous uses of its parts, although it is subject to poor management due to overexploitation and the undesirable practice of felling the palm tree to take advantage of its fruits, hearts of palm and its leaves.

Studies in the Venezuelan Amazon, cited by Brewer-Carias (2013: 20), indicate that in the 9 m2 area projected by the palm, between 30 and 50 kg of carbohydrates, fats and protein are produced per year, a productivity that is only surpassed by that of the aguaje palm (Mauritia flexuosa).

The chonta in Brazil

In the Brazilian Amazon, the fruit or drupe of the pupunha is popular, so much so that they call it the bread of the cabocos or caboclos, as they call the jungle people there.

The most important ceremony of the Waika indigenous people takes place when the pijiguao palm bears fruit, between January and April.

It is a time of rituals and festivals.

The pulp of the pijiguao drupe is used to help the fermentation of the yaraque, giving this alcoholic beverage a sweet touch.