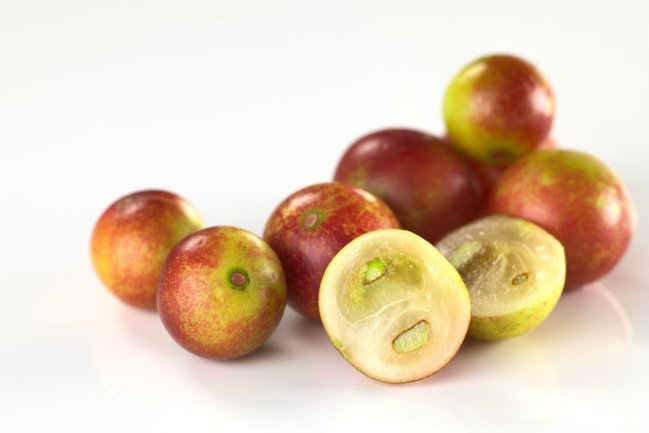 What is the fruit that has the most vitamin C in the whole world? The camu-camu ? I’ve never heard of that fruit… And the richest in vitamin C, isn’t it the orange? or lemon?

But those are the minor leagues of vitamin C richness.

Some research works indicate that the consumption of camu camu contributes to increasing serotonin levels, recognizing its effects as an antidepressant.

Most studies, acknowledging the rich vitamin C content of camu camu, attribute a high contribution to:

Where to buy Camu-camu?

This superfood can be found in powder form at health food stores, and online department stores. The fresh fruit is obtained in the Amazonian markets of Iquitos in Peru, and in Manaus and Belem do Pará in Brazil. Here are some links to online stores that offer this product in powder form.

Which fruit has the most vitamin C? The camu-camu or the kakadú

Specialists point out that the two fruits with the highest concentration of vitamin C in the world are kakadú ( Terminalia ferdinandiana) and camu camu ( Myrciaria dubia ) .

The kakadú, murunga or mador, is the fruit of a tropical tree native to Australia, up to 20 m high, of the Combretaceae family, which provides about 3,150 mg/100 g.

Whatever the definitive figures for vitamin C content, there is no doubt that these two fruits are, so far, the richest in vitamin C in the world.

The camu camu ( Myrciaria dubia HBK Mc Vaugh ) is a shrub, 3 to 18 m tall, native to the Amazon basin, with a straight, thin and smooth trunk, 10 to 15 cm in diameter, highly branched, with branches that They come out of the ground.

Its bark is light brown or greyish.

Its leaves are opposite, dark green and shiny on the upper side, and light green and opaque on the underside.

The fruit is a globose or spherical berry, 1 to 5 cm in diameter and variable weight between 2 to 20 g.

When ripe it turns from green to reddish-brown to violet-black.

Its pulp is fleshy, edible, with an acid taste, soft, with 1 to 4 elliptical or kidney-shaped seeds inside.

The fruit (peel and fruit) is a rich source of vitamin C, phenolic compounds, anthocyanins, flavonoids and carotenoids.

It is also a good source of potassium, iron, calcium, phosphorus, and various kinds of amino acids, such as serine, valine, and leucine.

Due to its richness in antioxidants and other bioactive components, it has been considered a superfood, a functional food or a nutraceutical.

Despite its richness in vitamin C and antioxidants, the efficacy of its components has not been sufficiently experimentally evaluated in humans.

It is known that the efficacy of some components decreases and others increases as the camu-camu fruit matures.

For example, the content of vitamin C, or ascorbic acid, decreases with ripening, but the anthocyanin, flavonol and antioxidant capacity increase.

With the pulp, combined with seaweed (agar agar) and yacon, a highly nutritious jelly has been produced in Peru under the name jellykids .

On the other hand, camu camu, which grows in flooded areas, is a food for the ichthyological fauna, that is, for fish .

Camu camu became important in Peru from the 1990s, although there are many difficulties in marketing it due to its irregular availability.

Its demand grew very quickly and the supply of the fruit was limited due to its origin from existing wild trees in the Amazon.

The high presence of vitamin C and other components has enhanced its pharmacological properties, as an antianemic, antiviral, analgesic, anti-inflammatory, healing, antispasmodic and antioxidant product.

Its application is done in different ways: fresh extract or juice, cooking of the bark of the stem in extracts, infusions, lyophilized powder, capsules, juice and cream.

The bark of the camu camu is traditionally used for the elaboration of the Amazonian liquor called seven roots, macerating its components in liquor for seven days to treat rheumatism.

The decoction of the bark and root is used to treat rheumatism and diarrhoea.

The bark scraped and heated with water is used to relieve muscle pain. With the leaves crushed and submerged in water, fever, headache and migraines are combated.

Various parts of the plant are used for the treatment of asthma, arteriosclerosis, cataracts, gingivitis, glaucoma, hepatitis, osteoporosis.

However, these applications of popular medicine are not experimentally supported.

Limitations and problems of camu camu

The ripe fruit of the camu camu is very delicate and perishable, as a result of its high water content, up to 90%, and vitamin C, which is very unstable.

The fruit under normal conditions does not last more than 10 days. Since it comes from areas of the Amazon basin, which are generally remote and difficult to access, it is difficult to market, since there are delays in its transfer to urban markets.

In general, the fruit is harvested green to facilitate its commercialization, which deteriorates its appearance, reduces the presence of anthocyanin in the peel and its vitamin C content.

The specialists begin to harvest the pintón fruit, transporting it in containers with a maximum capacity of 5 kg. To preserve the pulp, which represents 55% of the weight of the fruit, it is recommended to freeze it immediately after pulping at minus 10 °C.

The high perishability of the fruit also influences its reproduction. The seed lasts 3 to 4 days outside the fruit.

Inside it up to 10 days. If the seed is refrigerated, it lasts 1 month, and up to 6 months at room temperature, provided that the seeds are soaked and the water is renewed every day. With a planting density of 3 x 3 m, the production is 10 t per hectare/year.

Other problems of the plant and the fruit of camu camu is the great variability of the species.

Another is the susceptibility of the fruit to damage and bruising in the process of harvesting, transport and storage. The avocado is also prone to being attacked by pests.

Finally, the transformation of the fruit by freeze-drying is a relatively expensive process.

All these problems are aggravated because there is not enough research related to the genetic improvement of the plant, its agronomic management and the control of pests and diseases.

There is a species similar to camu camu, but it is arboreal. It is Myrciaria floribunda, a tree that reaches up to 40 m in height, whose fruit is a globose or spherical berry, with fleshy, edible pulp, colored between purple and dark brown, with an acid taste and with a lower vitamin content. C than the species Myrciaria dubia.

The importance of acidity

Sour taste is one of the basic flavors detected by the taste buds on the tongue.

It is detected by sensors, identified as TAS 21R, which capture, through ion channels, the presence of different organic acids (acetic, citric, tartaric, oxalic, malic) in the water where it forms hydronic ions.

Acid produces hydrogen or oxonium ions, which produces a feeling of rejection to safeguard us, because some toxic substances have an acid taste.

This rejection is an expression of the organism that manifests a physiological defense against poisoning. But not all types of sour taste are unpleasant and harmful.

How is the acidity of a substance measured ?

The pH value is an indicator of the acid content of a substance. pH is a scale from 0 to 14, and measures the concentration of positively charged hydrogen ions (H+).

On this scale, the value 7, the average value, is assigned to a substance that is neither acid nor alkaline.

Substances with values below 7 are considered acidic.

Those that are above 7 are considered alkaline.

That pH scale is not simple, but logarithmic: small changes in the pH measurement represent large changes in the concentration of ions (H+) and, consequently, in acidity.

The pH of a substance is measured using pH strips, or photometric indicators, or potentiometry techniques, which is the most accurate and most widely used method today.

The process is not simple, but the measurement is made much easier by using an instrument known as the ATAGO PAL-easy ACID, which measures the level of acids through electrical conductivity, and without using reagents.

It does not measure the acidity of each class of acid separately, but using a total acid conversion that is expressed as a function of the predominant acid in the analyzed sample (titratable acidity).

And express the result as a percentage. For example, in oils it is expressed in % of oleic acid, in fruit juice in % of citric acid, in milk in % of lactic acid.

The importance of the acidity of a food

Microorganisms do not survive or grow in acid media, but rather in environments with a pH between 4.6 and 9.

The problem is that most foods are naturally acidic, but their acidity is less than 7.

That is, not less than 4.6, which is the value that is not of interest because it represents food security.

At a value of 4.6, a very pernicious bacterium does not grow, Clostridium botulinum, responsible for botulism, a serious poisoning caused by the ingestion of food packaged in poor conditions, and which can be fatal. In such a way that the pH value of 4.6 is used to classify foods according to the notion of food safety. Below that threshold there is greater physiological protection.

But it must be taken into account that the pH value of a food is not constant, but rather varies according to the variety of the plant, the degree of maturity of a fruit and the variations in temperature to which it is subjected. .

The acidity of a fruit is important, in short, because it acts as a protective barrier against pathogenic microorganisms that spoil it and can cause illness in the consumer.

People’s beliefs about the most acidic fruits

The most acidic fruits, people believe, are citrus fruits, particularly lemon and lime. Citric acid is a natural compound present in many fruits. But over time it was synthesized in Italy, in 1860, and used more and more in industry. Experimental tests have shown, however, that natural citric acid is more efficient than synthetic citric acid in fulfilling its functions as a preservative and antioxidant.

Citric acid is used in the food industry as a food additive that has many applications: preservative, flavoring and antioxidant. And also in the pharmaceutical industry, to obtain effervescence and flavor and as a blood anticoagulant. Let us remember that vitamin C cannot be produced by the human body, although animal and plant organisms do, and it must be provided by external sources. Its production is important, and the largest producers in the world are the European Union, the United States, China, Brazil and Colombia.