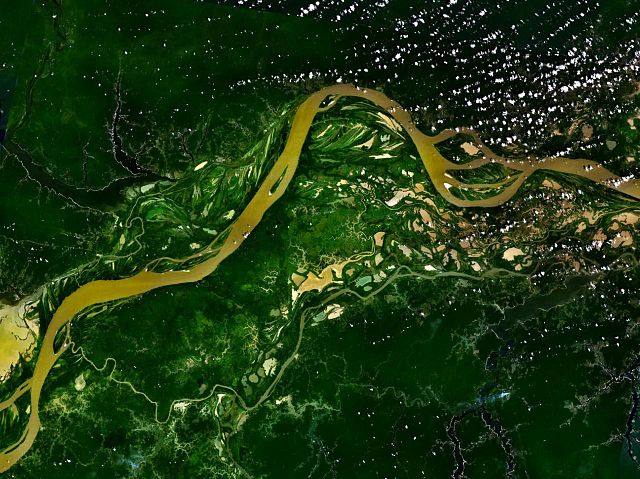 The Amazon rainforest is located in South America in the Amazon River basin and is shared mainly by 6 countries in the region(Bolivia, Brazil, Colombia, Ecuador, Peru and Venezuela).

Although the Amazon rainforest is a tropical rainforest as are other forested areas near the equator around the world (such as the jungles of Indonesia and Malaysia in Oceania and the Congo in Africa), this jungle protected by the Andes Mountains is not just any jungle.

The Amazon Basin forest is undoubtedly the largest reservoir of biodiversity on the planet, with the highest concentration of plant and animal species in the world.

Multiple specialized scientific studies, endorsed by the most reputable universities in the world, confirm this.

Biodiversity of the Amazon rainforest

In a study by American entomologist and biologist Edward O. Wilson published in 1988 he states that “Although tropical rainforesthabitats coveronly 7% of the earth’s surface, they contain more than half of the species of the world’s biota.”

But note that “tropical rainforests” does not refer only to the Amazon, but to all forests near the equator that enjoy an amazing biodiversity.

In the same study entitled “The current state of biological diversity”, the North American researcher highlights the incredible biodiversity of the Amazon rainforest compared to the number of species in other latitudes.

First, he used figures from his own research, indicating that in a single tree in the Tambopata Reserve (Amazon-Peru) he had found 43 species of ants belonging to 26 genera “almost equal to the ant fauna of the British Isles,” he added with surprise.

In another study on the overall diversity of the earth, the curator of the Smithsonian National Museum of Natural History’s Department of Entomology, Terry L. Erwin states that “The Amazon basin has the richest biota (assemblage of living organisms) on Earth.”

Characteristics of the Amazon Rainforest

It is clear then that the Amazonrainforest is a tropicalrainforest characterized by a high concentration of endemic species as well as the greatest richness in biodiversity, also called mega-biodiversity.

But in the Amazon rainforest the type of vegetation and fauna varies according to the altitudinal level. Researchers define three distinct zones according to altitude: high jungle, high jungle and low j ungle.

Soils in the Amazon

Its soils, contrary to appearances, are poor in nutrients; the Amazon rainforest feeds on biomass.

The image we have of the Amazon is directly related to the exuberance of the forest, and this, with the fertility of the soils.

But this is a misrepresentation because Amazonian soils are generally of low natural fertility, mostly acidic, with severe nitrogen and phosphorus deficiencies, low potassium and magnesium, and high aluminum toxicity.

These soils have a high propensity to erode.

Of the total Amazonian soils, only 6%, that is, a very small part, have moderate to high natural fertility, with possibilities for agricultural and livestock development, especially in the high jungle parts of the basin.

Frequent rainfall contributes to aggravate the situation, washing the surface of the soils, which makes them more fragile and vulnerable to inappropriate use.

Soil types in the Amazon

The soils of the Amazon basin are classified in a broad spectrum of seven dominant orders, among the eleven registered worldwide. But of the total, only three orders are responsible for more than 90 % of the existing soils: ultisols, the majority, with almost 70 %, and the rest with entisols and inceptisols.

These are generally old and worn soils that have been subjected to thousands of years of use.

There the indigenous communities have made their farms, and then they have been left as purmas. Although they have been minimally affected for this purpose, they have left traces in the primary forest.

The lesser, entisols, are young soils that include flooded alluvial soils, poorly drained, or non-flooded but located on slopes.

These are young soils generally located in flooded areas, and with the presence of large patches of aguaje palm(Mauritia flexuosa).

So why is there so much vegetation in the Amazon?

If that is so, that the soils are poor in nutrients, fragile and with high acidity, what is the reason for such lush vegetation, and that there is so much interest in deforesting the forest to establish highly profitable crops?

In the Amazon forest the soils are acidic and poor, and the vegetation does not depend so much on the quality of the soils, which serve mainly as support.

The existing nutrients for the forest are in the biomass, which the soil supports, and not in the soil itself.

The strong, long roots of the tall trees penetrate less than half a meter deep into the soil, and then spread out in search of the food that the soil barely gives them. They look for it and find it in the shallow humus mulch that provides the biomass.

The forest grows on the soil, and not from the soil, which becomes a mere physical support (1).

There, the numerous strong roots form an intricate web, in which they intertwine and reinforce each other at the base.

The result is a closed system, with a complex and fragile equilibrium” (2), which is organized, as efficiently as possible, to support the trunks and branches and to take advantage of water, high temperature and solar energy.

Deforestation in the Amazon

When the forest is deforested and the dense biomass is eliminated, the soil is left unprotected, naked, showing what it essentially is: a poor soil, in which the natural balance of the Amazonian ecosystem has been broken.

If the necessary nutrients (N, P, K) are not replenished, the soil becomes even poorer. And it continues to erode, now without protective vegetation cover, aggravating erosion problems due to leaching and the loss of the few nutrients that were present.

The waters of the basin’ s many water bodies will continue to carry sediment, to fragment an already eroded landscape. And we will have, as the organizations specialized in the maintenance of the basin say (3), a very intervened, desolate and sad landscape, with a serious alteration of the hydrological and biogeochemical cycles, with high atmospheric pollution.

Why is the Amazon forest deforested if its soils are poor in nutrients?

Map of the Amazon Rainforest

How was the Amazon rainforest formed?

The Amazon rainforest and the Andean mountain range are intimately related.

The Andean mountain range acted as a protective barrier, which led to a great endemism, characteristic of the fauna and flora of the Amazon rainforest, and an enormous wealth of biodiversity.

This richness is greater in the western Amazon compared to the eastern part, due to the influence of factors such as soils, especially their geological composition.

This possibility breaks with the accepted idea in scientific circles that Amazonian biodiversity came from refugia, or remnants of the Pleistocene forest, less than 2 million years ago.

This new hypothesis proposes that the formation of the enormous Amazonian biodiversity is the result of a complex process of very long gestation, which has been going on for the last 20 million years.

A wall that protects the jungle.

This geographical feature that today we call Amazonia was patiently built millions of years ago, and preserved by another: the Andes mountain range.

These two unique natural features, the Andes and the Amazon, twinned together, are responsible for the regional climate , geology, fauna and flora, and the current configuration of the South American subcontinent in all its natural forms and culture.

Unknown origin from the jungle and the Andes.

The scientific explanation of how both accidents occurred has not yet been well elucidated.

We know that the elevation of the Andes mountain range is the result of the subduction of tectonic plates, when the Nazca plate was placed below the South American plate.

This hypothesis is contrasted by another, which suggests that the uplift of the Andes occurred more rapidly and abruptly, rising 4,000 meters in a relatively short time, considering geological time, in the last twenty million years.

How did the Andean Cordillera affect the biodiversity of the Amazon?

This progressive or abrupt elevation of the mountain range brought about other major changes.

One is related to the regional climate, producing alternating situations of precipitation and drought.

The uplift resulted in the formation of large cavities that filled with sediment and water, like pools.

When the marsh dried up about 10 million years ago, a large forest developed and was colonized by numerous plants and animals.

The Amazon from outer space.

The astronauts, as they move away from Earth and look toward the Amazon, say they see an immense green stain that extends continuously. 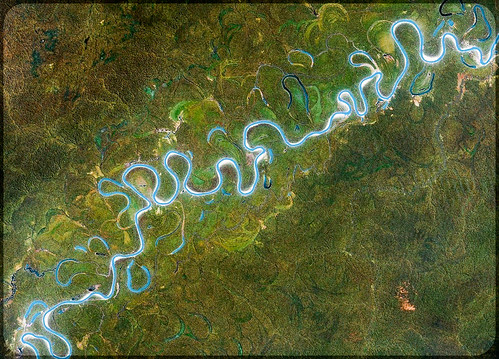 This testimony confirms the idea that the Amazon basin contains the largest continuous tropical forest on the planet.

The Amazon Rainforest from an airplane.

When we look at the Amazon from an airplane, after overcoming the impressive Andes mountain range, we see a great green mantle, uniform, furrowed by meandering rivers, as if it were the body of a green giant with whitish veins.

As we approach the runway, ready to land in some Amazonian city, whether it is Manaus, Brazil, or Iquitos, Peru, we see how the “only” green is decomposing into many shades of green, and the forest becomes heterogeneous, diverse.

Nevertheless, in the midst of the overwhelming vegetation, tall palm trees predominate, announcing themselves with their whimsical tufts and, in many parts, the palm trees are agglomerated, in large concentrations or patches, which subdue all other vegetation, taking over the landscape.

We are witnessing, then, a lesson in ecology dictated by that geographical feature we know as the Amazon, the most extraordinary rainforest that human eyes have ever seen.

The ills afflicting the Amazon

There is also the idea that the Amazon is an immense forested area with little human intervention.

But this is not the case.

The following are some of the main causes of the worst ills afflicting the Amazon Basin today.

Deforestation in the basin advances rapidly from year to year, stimulated by the populist political discourse that mitigates the economic and social problems of these countries, promoting increasing agricultural colonization and indiscriminate deforestation, processes that herald the advance of cattle ranching and large agricultural plantations, generally of monocultures such as soybeans and, to a lesser extent, coca.

Other factors, in this case illegal, such as drug trafficking, clandestine mining and illegal logging, are also responsible for human intervention in the Amazon, despite the remarkable conservation efforts that countries have made to establish protection measures.

In fact, 610 Natural Protected Areas are registered in the Amazon, where 2,344 indigenous territories are located, occupying 45% of the total area.

In practice, however, this legislative provision has not acted as an efficient deterrent to reduce the systematic and increasing destruction of the basin’s natural resources and to alter the Amazonian indigenous cultures, which constitute a valuable ethnodiversity that has been transmitting its ancestral knowledge for more than ten thousand years.