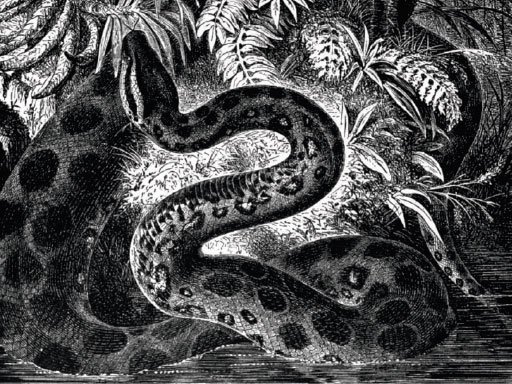 The legend of the giant anaconda of the Amazon or yacumama is a cosmogonic myth that explains the origin of the universe in the same way as the genesis does in the Christian tradition.

Sukhov (1968) points out that the word is the foundation of the narration of myths in peoples who lack writing.

This is the case with many Amazonian peoples. In their cosmogony there is a close interrelation with nature, and water, plants, animals, the Sun, the Moon, in their animistic conception become brothers.

These characters acquire enormous dimensions in their legends. The Amazonian societies, according to the observation of the chronicler Garcilaso de la Vega, in 1609, worshipped the great snakes for their monstrosity and fierceness, in correspondence with the belief that they were related to the animals.

The cosmogonic myth of the anaconda: origin of the universe.

One of these myths related to the great serpent, origin of the universe, giver of life, guardian of the waters, is a legend of the Desano, an Amazonian ethnic group that lives in the upper basin of the Vaupés River, in the border zone between Colombia and Brazil, specifically in the Colombian department of Vaupés and the Brazilian state of Amazonas.

A great ancestral anaconda penetrated the universe/house, through the water gate and ascended the Negro and Vaupé rivers carrying within its body the ancestors of all mankind.

Along their journey the remote ancestors transformed into humans. Upon reaching the Ipanore waterfall, formed by the flow of the Jirijirimo River, which in the indigenous language means the bed of the anaconda, the ancestors divided the land into what would become their particular territories.

The long body of this gigantic anaconda represents the place of residence, the dwelling or maloca and the way in which the different groups are integrated and act, defining their identity, that is, their name, their history and their language.

In each clan of this patrilineal and exogamous group, open to the world, the children of the first ancestors of the great anaconda are organized according to a structure in which, at the head of the anaconda are the chiefs, in the middle the shamans and at the tail, the people.

The myth of the Great Anaconda or Yacumama

The anaconda receives many names in Amazonian myths: yacumama (from yacu, yaku, water, and mama, mother), sachamama (from sacha monte).

In myths, the great anaconda is the mother of water, its protector and even the origin of life. It is a gigantic snake that lives in the water, and can reach a length of about fifty meters. It possessed great strength and shot strong jets of water that knocked down trees. It could suck things up from a distance of a hundred meters.

In some myths the yacumama or great anaconda was the guardian of the gate to heaven.

In order to enter heaven, the dead had to seduce her.

For some peoples, such as the Huaorani of the Ecuadorian Amazon, the anaconda was related to the milky way that, when descending to earth, created the Amazon River.

For others, as is the case with some Amazonian groups in Brazil (Gómez-Platero, Palma-Elrichs 2011; Llorente, Sacona 2012), the Amazon River was born from the impossible love between the Sun and the Moon, in the times when animals spoke.

It was an impossible love because as they approached, the sun melted the moon, and the moon extinguished the sun. That’s why, despite loving each other so much, they decided to separate.

The moon wept and wept endlessly. And his tears were shed upon the earth, but they were rejected by the sea. And so they formed the long and mighty Amazon River.