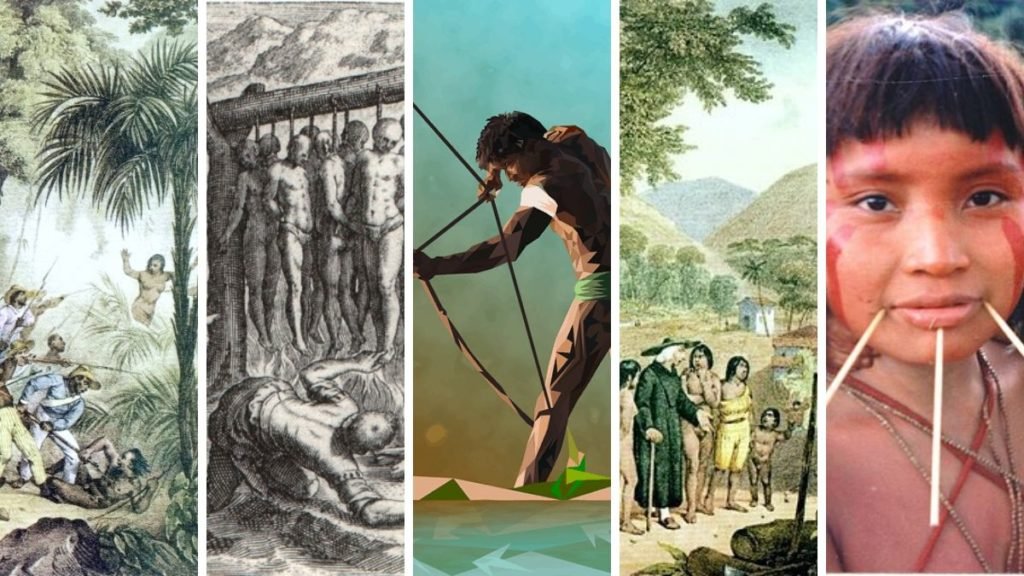 Amazonian indigenous peoples sometimes range across borders, inhabiting two or three countries without regard for geopolitical boundaries. Examples include the Yanomami between Venezuela and Brazil, and the Achuar between Peru and Ecuador. Because they were there before the Spanish conquest, they do not belong to any single nation state.

This article presents a list and description of the main tribes or peoples that inhabit the different countries of the Amazon jungle and basin, their history, origins, how many are left (population), and the dangers they face today.

Indigenous people of the Bolivian jungle

Some 125,000 indigenous people live in the Brazilian Amazon, which is equivalent to only 0.78% of the region’s total population.

Among them, the Guaraní are notable with some 51,000 individuals, followed by the Tikuna with a little over 40,000, and the Yanomami, with 19,000 people scattered in the north of the Amazon.

Between 80,000 and 150,000 indigenous people live in the Colombian Amazon , grouped into 64 ethnic groups, which correspond to about 10% of the total population of the region.

Tabatinga is a Brazilian city located in the extreme west of the Amazonas state of Brazil, on the left bank of the Solimões River and forms part of the shared border with Colombia and Peru located in the so-called Amazon Trapeze.

Puerto Nariño (Department of Amazonas – Colombia) where it is, map, geographical location, what to do, PHOTOS + VIDEO

Chiribiquete National Park: How to get there, indications, origin, maps, images, flora, fauna and cave paintings

The indigenous settled in the Putumayo river basin suffer the ongoing consequences of armed conflicts, deforestation, the effects of oil extraction, and contamination of  rivers, all of which cause their displacement.

In the Ecuadorian Amazon there are between 130,000 and 146,000 indigenous people, making up 20% of the regional population. They are distributed among ten ethnic groups; the seven most populous include the  Kichwa, Shuar, Achuar, Shiwar, Cofán, Siona-Secoya and Huaorani (Waorani). The Kichwa and Shuar-Achuar together make up 83% of the regional indigenous population.

Chachapoyas: History, how is the city. Cultural Heritage of Peru. Tourist places of the city.

Pitaya Petroglyphs: Scientific research, description, location, how to get there.

Of all the ethnic groups in Venezuela, the Yanomamu and the Piaroa stand out, and together represent 48% of the total indigenous population. They are distributed in the states of Amazonas and Bolívar.

A little more than 42,000 indigenous people live in the Amazon regions of these three nations. There they are sometimes known as “Amerindians,” to differentiate them from the population that originated in India.

This total is distributed as follows:

It is hard to count the indigenous population that is in contact with other inhabitants of the Amazon basin. But it is even more difficult to estimate figures on the number of PAV (población aislada voluntaria, or Indigenous Peoples in Voluntary Isolation) who live there. Some estimate that there may be as many as 100 true PAV groups, numbering probably 5,000 individuals. As its name suggests, a PAV is an indigenous group that avoids contact with other groups, and goes into the jungle to avoid it. The PAV are hunting and gathering peoples who live in the jungle without changing their customs, their lifestyles, or their harmonious relationship with nature.

The Coordinator of the Indigenous Organizations of the Amazon Basin (COICA) mentions the existence of 66 PAVs in the Quito Declaration of 2018, but there are certainly many more. Specialists estimate that there may be about 145, of which 80 have been studied. Of this total, about 100 are scattered throughout the vast territory of the Brazilian Amazon, and there are about 25 in the Peruvian Amazon. Some of them are the Piripkura, Kawahiva, Korubo, and Kuikuro in Brazil; the Nahua, Nauti, Masco-piros and Cohibo in Peru; and the Yuri and Nukak in Colombia.

History of the indigenous peoples of the Amazon

To understand the indigenous peoples of the Amazon, with all their great linguistic diversity and distinctive cultural traits, it is first necessary to understand their history: how they got there and how they became what they are today.

The Amazon basin began to be noticed by foreigners beginning in the 19th century. Political and religious efforts to establish colonies in these almost impregnable jungle areas did not make much progress, despite the great dedication of the religious orders involved, largely Jesuits and Franciscans.

These orders founded many settlements to concentrate the indigenous people in “reductions,” particularly in the Upper Amazon, but their progress was very limited. The Amazon Basin also continued to be an attractive location for naturalists and explorers throughout the 19th century.

Rubber exploitation (species Hevea brasiliensis) started in 1879. This inaugurated a time of great economic prosperity for the rubber barons, who became very wealthy by collecting and exporting their product. However, this booming business also led to genocide and enormous suffering for the native Amazonian communities.

This was effectively a new, voluntary genocide, which followed the armed genocide by the Spanish and Portuguese conquerors and colonizers, and the involuntary genocidal effect of contagious diseases against which the indigenous people had no defenses.

This has been called epistemicide: the destruction of indigenous knowledge bases. Through this, the perpetrators sought to eliminate indigenous religious practices,  cosmology, languages, and general ancestral knowledge. Fortunately, this effort was not a complete success.

How did the indigenous people get to the jungle?

The Amazon basin has been home to humans for more than 10,000 years (Roosevelt 1994).  The residents were initially hunter – gatherers who settled in the eastern and southern part of the basin. Then around 5,400 to 3,200 BCE, they began to settle in the central and lower Amazon regions, with migrations from the Caribbean or the Andes, arriving in the lowlands from the high forest or the edge of the jungle.

The first settlers of the jungle were likely attracted by its extraordinary wealth of resources, especially plants and animals.

Indigenous population in South America before the arrival of the conquerors.

Although it is not certain, historians conservatively estimate that at the time of the arrival of the Europeans around 1500, there were between 13 and 17 million inhabitants in North, Central, and South America. However, other historians, (Spinden and the Berkeley School) estimate the indigenous population of the continents at more than 70 million. Estimates of the population in South America range between 7 and 20 million. In the 7 million square kilometers of the Amazon basin, population estimates vary between 5 and 7 million, distributed among some 2,000 indigenous tribes.

As a result of the European conquest, these peoples slowly transformed, changing their ways of life as a result of contact with foreigners and the cultural patterns of settlements and urban life. European-based politicians, economic groups and city dwellers considered the indigenous to be primitive peoples that opposed development. Thus, plans were made to conquer the jungle territory, and in the process, its natural resources were harmed or destroyed. Expansion followed, with increasing deforestation of the agricultural and livestock frontiers, along with increased logging and mining activities.

Current indigenous population of the basin

The current population of the entire Amazon basin is estimated at about 20 million. Of these, close to a million, or five percent of the total, are indigenous, and belong to about 400 different ethnic groups.

By “ethnicity” we mean a human community that shares a set of socio-cultural elements (language, religion, institutions, organizational forms, values, and customs), in addition to having common ancestors. The vast majority of the current inhabitants of the Amazon are mestizo (mixed indigenous and European) settlers, or landless peasants, who have come from other non-Amazonian regions. The figures and information above differ according to the source, and the authors’ political affiliations.

The Coordinator of the Indigenous Organizations of the Amazon Basin (COICA), based in Quito, was created in 1995. Its members come from  nine countries in the basin: Brazil, Bolivia, Colombia, Ecuador, Peru, Venezuela, Guyana, French Guiana, and Suriname.

In the Declaration of Quito of March 2018, COICA indicates that in the Amazon basin there are 390 indigenous groups, of which more than 66 are in voluntary isolation. There are more than 2.5 million indigenous individuals in all.