The Amazonian indigenous people  live mainly for  4 activities: hunting , fishing , gathering , cultivation of the chacra and the family garden .

The most important things are hunting and fishing, which constitutes their main source of protein, essential for their daily  life in such a rewarding but hostile environment, such as the Amazon Rainforest.

The degree of dependence of the Amazonian population on hunting and fishing varies basically according to the period of the year, and specifically to the rainy season, especially in the highlands, where a large part of the Amazonian rivers are born.

Fragile balance of the ecosystem

The frequency and intensity of the rains are directly related to the emptying or increasing of the rivers, which are, in turn, related to the availability of fish , collecting wild fruits and with the behavior of the animals of the mount, that move away from the rivers in times of low water.

In the Amazon, the existing interdependence between the elements that compose it, and with the way of ensuring subsistence, is very clear.

The vegetation, and its variety, is interrelated with the characteristics of the soil, the water and the fauna .

For example, fauna can´t exist without the forest . The forest cannot exist without fauna, because forest animals act as active agents of pollination and seed diffusion, which is essential for the reproduction and survival of plant species.

Hunting is a fundamental activity in the survival of the Amazonian inhabitants, whether they are indigenous or settlers.

However, over time, it has been losing importance because wildlife resources have decreased due to overexploitation for commercial purposes to which it has been subjected, at a rate close to that of reproduction, putting many animal species at high risk of extinction.

Consequently, hunting, which had sustained the Amazonian population for thousands of years, is now seriously compromised.

That is why we must insist that hunting is an activity that affects the Amazonian ecosystem in various ways.

Hence, it is not convenient to hunt or fish in a certain area for a long time, above its replenishment rate, because the resources are depleted and tend to disappear.

The hunting practiced by the native indigenous communities is not the same as the hunting carried out by the settlers or urban dwellers, who seek an economic surplus, over and above the satisfaction of food needs as the indigenous do, who do not have the custom nor the means of preserving large amounts of food. 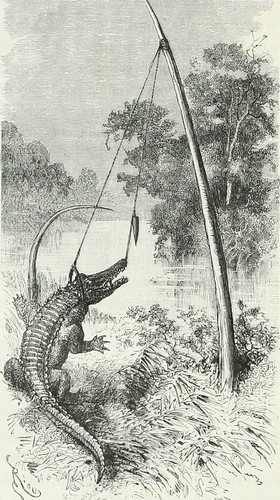 For a jungle indigenous person , hunting is not reduced to capturing an animal and consuming it. An animal of the forest within the Amazonian cosmogony is a brother or a fellow traveler of the same entity as the human being.

In their beliefs, each animal has an “owner”, to whom permission must be sought to access.

Many contemptuously call it “the law of the jungle”, but it is, in reality, an established order that allows balance to be maintained within a very fragile ecosystem that is heavily intervened by outsiders.

Within the indigenous perspective, it is an efficient way of maintaining community life, without expressly seeking a surplus that can be monetized and accumulated, as happens in the surrounding market systems.

That “balance”, the way of thinking about it and applying it, works as a sort of ethic among indigenous people who are not assimilated into urban culture with respect to nature.

For an established, non-nomadic, sedentary community, survival activities (hunting, fishing, gathering and farming) are related in a relatively limited space, except for hunting or fishing parties that take place several days away from the settlement .

It is therefore a short-chain food consumer, which minimizes caloric loss in special transportation, and in food processing, because it uses elementary conservation systems, such as smoking.

In many parts of the Amazon, they survived by gathering wild fruits in the jungle, such as palm drupes, or some species of edible insects , complementing hunting and fishing, which were abundant at the time, and obtaining them did not involve a great energy expenditure. .

Hunting in the Amazon

Hunting is a very specialized activity, due to the skill in handling the implements used. For this reason, hunting became an almost exclusively male activity in all the ethnic groups of the Amazon, which gave social prestige within the group to the most skilled hunters.

The river as an indicator.

The efficiency of hunting and fishing changes according to the behavior of the  bodies of water  in the Amazon.

During the flood season, the abundance of fish in rivers increases  with spawning and reproduction of fish, but fishing decreases, while hunting increases, at least for some animal species. 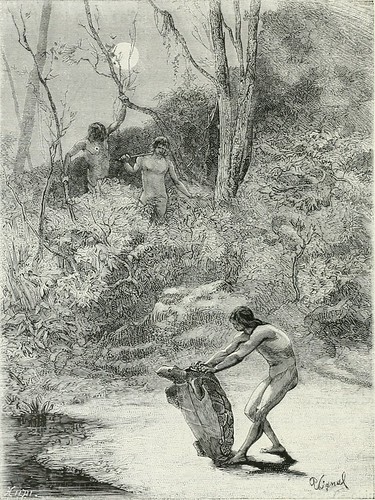 In the emptying of the rivers, fishing and the capture of turtles increases, while the animals of the forest move away from the rivers and go into the forest, making it difficult to hunt them, and spending more energy to hunt them.

The difficulty of hunting in the Amazon today

The constant presence of poachers near Amazon cities drives wild animals away. And despite the fact that there may be a relative wealth of mammals , and especially birds and fish , there are increasingly more difficulties for hunting and fishing (1).

Mammals , particularly the large ones, such as the tapir , sachavaca or tapir ( Tapirusterrestrials ) or the deer ( Mazama Americana ) are very vulnerable because they are more “visible”, their meat is highly demanded in the Amazonian markets and their rate of playback is very slow.

The tapir, the largest terrestrial vertebrate in the basin and a great seed disperser in the forest, gives birth to a single calf after 420 days of gestation, almost fourteen months.

Most of the animals of the forest in the Amazon correspond to endemic species, which later spread to other basins (2)

Fishing as a primary mode of subsistence in the Amazon

Fishing is an activity that offers greater possibilities than hunting for the population to provide themselves with protein.

Tello (3) estimates that the riverside inhabitants depend on about 70% of the food resources derived from fishing in the Peruvian Amazon, a situation that is repeated in other countries of the basin .

This enormous pressure on fishing resources has put the sustainability of the activity at risk in some parts, and official agencies have had to intervene by establishing regulations to mitigate the negative impacts of overexploitation of the resource.

Fishing is practiced in three modalities: as artisanal fishing, commercial fishing and fishing for ornamental purposes.

The first is family maintenance fishing and more limited in its environmental impacts, because it is carried out with rudimentary tools and gear, although there are numerous fishermen, who operate in small boats, known as “pequepeques”. It has less environmental impact, but it is important in volume, and it is estimated that it supplies nearly three quarters of regional fish consumption.

Commercial fishing is the one that produces the greatest environmental damage, due to the aggressive technology used, which does not discriminate between species and size of the catch to satisfy the needs of the expanding regional markets.

The large rivers are the largest suppliers of fish in the Amazon, most of them classified as whitewater rivers, which are fed by tributaries that are born in the Andean mountain range, with cloudy waters rich in sediments and high temperatures, which result in a excellent habitat for many species of fish, turtles and aquatic mammals, such as the manatee ( Trichechus monguis, T. inunguis).

It is important to point out that fishing in the Amazon is multi-specific in nature, delivering many species of fish in each landing. This diversity makes handling and management difficult, since the habits and behaviors of the captured species are unknown.

It is an activity, particularly artisanal fishing, that is difficult to account for and monitor. However, despite the multi-specificity, no more than seven species stand out in landings, which represent about 70% of commercial fishing landings.

Regarding the nutritional values of freshwater fish compared to saltwater or marine fish, it must be considered that many freshwater species, especially those with smooth skin, have a low fillet yield for culinary purposes.

The same happens with fat content , which is an important criterion for evaluating the nutritional value of marine species , but does not apply to freshwater species. In addition, the Amazonian species have lower protein content than the marine ones (4).