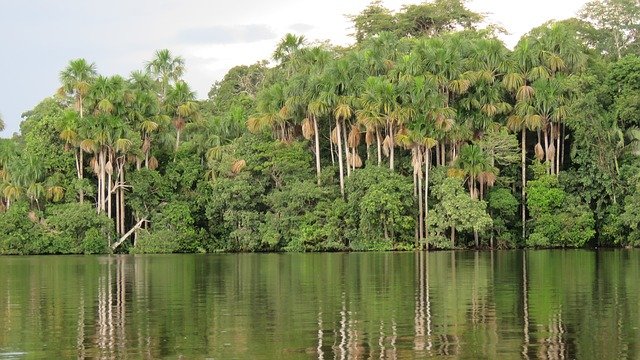 There are many species or types of palm trees in tropical areas of the world.

Palms are the most useful plants for the survival of indigenous communities in the Amazon Rainforest, regarding food security and sustainable development.

They are found in any of the Amazonian regions, from Brazil or Peru, the largest ones, to Ecuador and Venezuela, the smallest (without considering French Guiana, British Guiana and Surinam).

However, palms also grow in other regions, such as the Sierra (mountain range) or Costa (coast) regions.

I would say that everyone can easily recognize these kind of plants .These are trees without branches, with a tubular trunk that ends in a plume of leaves.

Various uses of the Amazon palm.

The Venezuelan explorer and naturalist Charles Brewer-Carias says, in his book “Naked in the Jungle” (1), that palms are very useful for the life of the Amazonian indigenous people because their fruits or drupes and buds are food; part of its tender leaves are used as fibers and materials for handicrafts (mats, arrows, baskets); its trunk is used as wood for construction; its long and wide leaves, to roof the houses, or as a tablecloth for meals.

From the palms syrups, starches, alcohols are also obtained, and from its rotten trunk, edible larvae are extracted, and even sharp spikes.

M. Macía, in a 2004 investigation (2) found that the Huaorani, from the Ecuadorian Amazon, give 191 different uses to palm products.

The same happens in the other Amazonian regions , such as Peru. As in other tropical regions of the planet.

As the great scientist Alfred Russel Wallace wrote in 1853: “Everywhere rise graceful palm trees, true inhabitants of the tropics, of which they are the most striking and characteristic feature” (3).

Palms around the world: “princes of the plant kingdom”

There are some 3,000 species of palms registered in the world, which have a wide distribution: they range from desert areas to rain forests, and come in different sizes: from dwarf palms to gigantic trees over 60 meters tall.

Their trunks range from the thickness of a writing pencil to more than a meter in diameter, and can be smooth or completely covered with long, hard spines.

Experts point out that palms are, after cereals, the most useful plants for the well-being of communities living in the jungle.

Linnaeus, the great Swedish botanist, called them the princes of the plant kingdom for a reason.

Humboldt called “tree of life” only one of them, the moriche ( Mauritia flexuosa) , to which the Warao, from the Orinoco River delta, give multiple uses: wood for construction, starch, syrup, alcohol, edible larvae , ribbons for weaving baskets and hammocks.

And mainly as food and as oily matter, for its fruits or drupes and its heart, or heart of palm, an inflorescence of the plant.

If you look only at the medicinal uses of parts of the palm, there are many traditional applications in indigenous communities .

In the Colombian Amazon, 26 applications were found for only 29 palm species, to combat infections and infestations (antimalarial, anthelmintic, and lice), antidotes (against scorpion, ant, and snake bites), and respiratory conditions (4).

In any case, this abundance depends on the Amazon region in question. The mentioned species abound in other parts of the Amazon basin, but with other common names.

For example, the Peruvian aguaje is known as morete in Ecuador, muriti or buriti in Brazil, moriche in Colombia and Venezuela , and royal palm in Bolivia (5).

The palms in Ecuador.

However, these figures must be put in a fair context, since they do not always refer to the Amazon region, but to the entire country. One of the most complete and up-to-date studies on Ecuadorian palms, published in 2013 (6), points out that Ecuador is the South American country with the most species of palm trees, totaling 136 species, but most grow in the Sierra, and not in the Amazon region of that country.

Impact of the extensive cultivation of the African Palm in the Amazon.

It is necessary to distinguish between the native Amazonian palms and the introduced species.

One of them, cultivated and very important due to the area it occupies, is the oil palm or African palm ( Elaeis guineensis), native to Equatorial Africa.

Its cultivation has spread throughout the Amazon basin for the production of oil and biofuels.

To plant it, large areas of the Amazon rainforest are deforested.

In the Peruvian Amazon alone, it is estimated that by 2021 more than 480,000 hectares may be dedicated to its cultivation, which represents considerable damage to the environment, not only because of the felling of forests to implant its cultivation, but also because its processing and its residues produce environmental pollution (7).