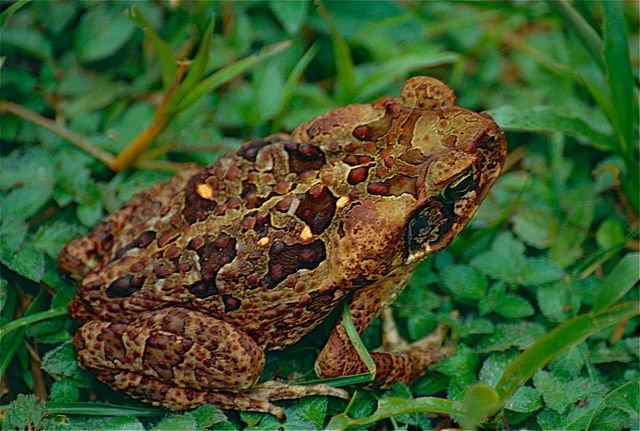 Giant toad, cane toad , Rhinella marina o Bufo marinus is a species of Amazonian toad found mainly in the Amazon rainforest in Peru, Ecuador, Brazil, Colombia and Venezuela, whose protection mechanism against predators is to secrete a poisonous milky liquid from its skin.

By taking samples of these bioactive substances, studying their composition with spectrometers and isolating them, scientists have found that they possess chemical compounds that counteract the proliferation of cancer cells.

According to a study led by the Paraguayan-German biochemist Guillermo Schmeda-Hirschmann of the University of Talca-Chile (2016), it could be found that the poison produced an effect of. cell cycle arrest in cancer cells among which he mentions “normal human lung fibroblasts, human gastric adenocarcinoma cells, human lung cancer cells, human bladder carcinoma cells and human promyelocytic leukemia.”

Five years earlier, in 2011, Chinese scientists had already demonstrated that the venom of a similar toad(Bufo bufo gargarizans) traditionally used in the Asian country to treat cancer does indeed possess compounds that prevent the proliferation of cancer cells (Qi et al., 2011).

The substance found in these and other poison toads from other parts of the world contains bufadienolides, peptides and alkaloids that show antitumor activity (Schmeda-Hirschmann, 2016).

Other anurans in the Amazon basin possess poisons with similar bioactive substances. This is the case of the frog popularly known as Kambo ( Phylomedusa Bicolor ) whose effect is compared to that of ayahuasca, which has also been the subject of many scientific studies that support its medicinal virtues.

On the other hand, with this toad there has been a case like the bullfrog but in reverse. This Amazonian amphibian has been introduced into Australia where it has become detrimental to the lives of animals native to those ecosystems.

The invasion of the giant Amazonian toad.

In 2015, a research conducted by scientists at Deakin University (Australia) counted the 80 years of the invasion of cane toads or giant toads to the Australian territory and analyzed how this species had genetically mutated in such a short period.

One wonders how does an Amazon toad get to Australia?

Thanks to a brilliant idea that was misapplied.

Before the proliferation of chemical pesticides for pest control in agriculture, it was common to use the so-called bio-controllers to take care of crops, plantations or, in our case, sugarcane fields.

The reasoning is very simple, since some insects eat the cane, let’s look for an animal that eats those insects.

Someone tried the Rhinella marina and apparently did very well because first they sent a shipment of these toads to be released in reed beds in the Caribbean, then they took them to Hawaii in 1932 and then to the land of the kangaroos, specifically to Queensland where descendants of these toads were released. Amazon amphibians were released in 1200 km of sugarcane fields.

In the short time since this species invaded Australia, it has already mutated to adapt to its new habitat. But their success is inversely proportional to the population decline of other native species (Shine R, 2010).

Now that it is known that the venom of these toads cures cancer, surely someone in Australia will come up with a good idea to control its spread and take advantage of its potential in the pharmaceutical industry.