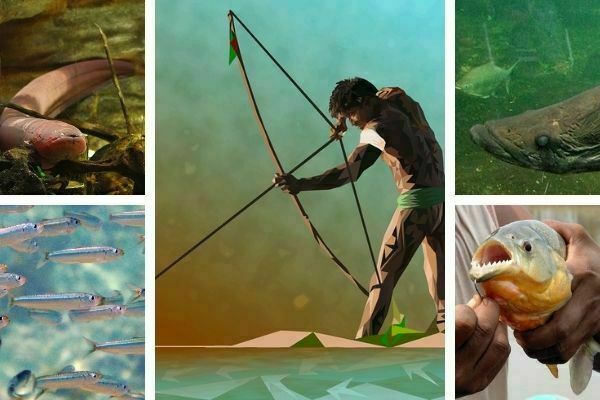 Fishing in the Amazon has become the main activity for supplying the necessary protein, which constitutes a serious threat to guarantee the sustainability of the resource due to the overexploitation to which it is subjected.

Not so much because of artisanal fishing, carried out with a bow and arrow, harpoon, dart, net and the use of basbasco , and difficult to record, but by commercial fishing, which uses larger boats, equipped with nets for massive and indiscriminate capture of fish, which unloads its cargo at the fishing terminals.

Types of fishing in the Amazon.

Fishing is carried out, according to the purpose pursued and the available resources, in four modalities: artisanal or support fishing, commercial fishing, fishing for ornamental fish and sport fishing.

This artisanal or support practice that riverside fishermen market locally, in which they use arrows, harpoons, small nets, and even using fish-paralyzing plants such as barbasco ( Banisteropsis inebrians ) in small watercourses.

Commercial fishing, the most important fishing modality, due to the volumes of product obtained, uses larger and more technical nets, and operates in large vessels, equipped with cargo refrigeration systems or, in the worst case, with boxes isothermal with ice to preserve the freshness of the product until it reaches the ports of unloading.

This type of fishing is the only one that can be accounted for, albeit partially, by delivering its cargo to the large landing ports in each Amazonian region.

It can be noted that, in the main ports such as Iquitos and Pucallpa, in the Peruvian Amazon, the most captured species are the boquichico and the sardine ( Triportheus angulatus ) followed by:

Other fish are in danger due to their indiscriminate fishing, among them we have the Paiche and especially the Manatee (aquatic mammal), also mistakenly called river cow.

Finally we have ornamental fish fishing, which is a very active trade to supply the extended aquarium business throughout the world.

In any case, the largest volumes of fishing are obtained in whitewater rivers with the commercial fishing modality. These rivers have waters that are richer in suspended nutrients and, therefore, richer in fish.

But, in practice, Amazonian fishing is an activity that takes place in various environments: in rivers, but also in streams, lagoons or oxbow lakes, with calmer waters.

Sport fishing in the Amazon:

This modality of fish farming most closely related to tourism is undoubtedly the one that least affects the region’s fish ecosystem.

Perhaps it is the one that can provide the best economic and environmental conservation benefits in the future, since, as is known, in the ethics of sport fishing, the fish is returned to its origin once it has been caught, weighed and registered.

According to the opinion of some specialized websites on the subject, the Amazon region is a privileged place for this sport due to the diversity and size of the specimens typical of the basins that cross the Amazon. Among them are the following:

Although some specialized sites claim that sport fishing can be practiced throughout the year, others recommend doing it during the dry season that runs from August to December.

Places for Fishing in Amazonas:

In this article you can learn what a “cocha” is and what are the favorite places for fishing in the Amazon.

We have already named some of the most sought after fish according to the type of fishing but if you want to know more we have a page dedicated to the fish of the Amazon.