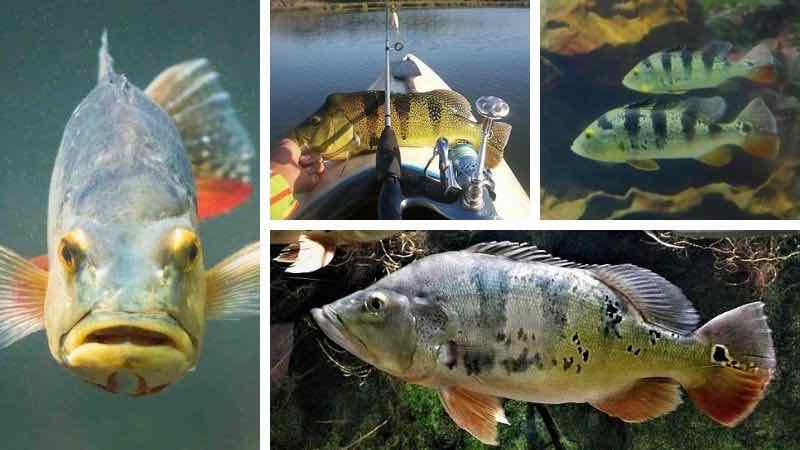 Among the fish commonly called tucunaré or pavón (C. monoculus, C. ocellaris, C. temensis, C. orinocensis and C. intermedia) are found in five species of Cichla that thrive in Amazonian water bodies, especially in lentic environments or watercourses of lesser flow and movement, including lagoons or lakes and rivers of calm or gentle waters, with a certain depth.

Although there are several common names depending on the Amazon region they inhabit, these names are grouped around two: tucunaré and pavón.

The term tucunaré is used in Brazil, Peru and Ecuador, with the variant tucunara in Colombia.

Elsewhere, in certain areas of the Colombian Amazon and throughout the Venezuelan Orinoco River basin, it is known as pavón, with various nicknames such as pavón tres estrellas or pavón mariposa. In Panama he is called sergeant.

It is also found in Panama and part of Central America to the north, and to the south of Brazil it is found in the Pantanal area and in the Paraná River basin.

It inhabits the middle courses of rivers and flooded areas during the rainy season. Preferably in waters with a temperature between 26 and 29 °C, with little current and deep water.

The different species of toucunaré or pavón belong to the family Cichlidae and to the genus Cichla. The tucunaré corresponds to one of the largest cichlids native to the Neotropics that live in lentic water environments.

Although there are some differences from one species to the other within the genus, some generalizations can be made: they have an elongated body with a tendency to compress at the back, forming a relatively large caudal peduncle.

Its length is around 70 cm and its weight ranges from 5 to 9 kg, although specimens weighing more than 5 kg are rare. Females are smaller and lighter in weight.

Of the five species, C. monoculus reaches the greatest length. They show a certain sexual dimorphism, since at the time of sexual maturity the males are slightly longer and more robust than the females.

The mouth is large and retractable. The dorsal fin is irregular while the caudal fin is rounded.

The color of the body depends on the species, but, in general, its colors are vivid, beautiful, from yellow to olive green, with orange tones.

They have ocelli. Some, a black ocellus surrounded by a circle with yellow shades on the caudal fin(C. monoculus). Three broad, vertical gray bands are generally observed.

Some have three black ocelli with yellow haloes along the body and another ocellus on the caudal fin.

C. temensis has three black stripes on the body and the ocellus is on the caudal fin. In any case, it should be noted that the coloration of the fish changes according to age: gray tones predominate in juveniles, and more cheerful shades of green, yellow and orange in adults.

The lower part of the pre-pelvic and abdominal region is yellowish. Most of the scales on the sides of the body have light centers and dark edges.

In the area of the Ucayali River, in the Peruvian Amazon, where the tucunaré(C. monoculus) has been extensively studied, the spawning season coincides with the rising of the river, between the months of October and January.

It reproduces in lentic streams, making mijanos for reproductive purposes. Although it does not make longitudinal breeding migrations. Males reach sexual maturity in the first year.

Females, on the other hand, reach it from the second year of life. During the breeding season, males become more territorial, and develop a hump on their head, which then disappears.

The female clutches more than 3,000 eggs, which hatch in 4 to 6 days. Both parents provide parental care to their offspring, and aggressively defend them, guarding them for months.

When predators are nearby, the pairs house the fry in the cavity of their mouths to protect them.

This fish is very territorial and aggressive, behaving as a natural predator, attacking lizards and iguanas. It sometimes acts as a predator of exotic species introduced in Amazonian rivers, such as tilapia.

It has a highly developed lateral line, which facilitates the capture of other species, because it helps it to capture the slightest vibration in the water, which is important in deep and turbid waters.

It is an omnivorous species at the beginning, but when it reaches the adult stage its diet becomes exclusively piscivorous, feeding on fish of the order Characiformes, but also of the orders Siluriformes, Perciformes and Gymnotiformes.

It is a very voracious fish. In the juvenile stage it feeds on smaller fish and river shrimp. He even tries to capture lizards and even iguanas. Therefore, it is considered a natural predator, which seeks food during daylight and twilight hours.

The meat of these fish is considered to be of high quality, which is why it is highly prized and fetches the highest relative prices in the fishing markets of the Amazon region.

Compared to other equally prized species such as bocachico, paco and gamitana, which are more frequent in the records of landings in Amazonian fishing ports.

It is a fish considered intelligent, strong and difficult to catch. However, it is fished using waiting nets or traps, traps and hooks in fishing practiced in lentic environments.

Generally, its meat is marketed regionally, fresh and dried-salted, more in the latter presentation.

Specialists praise the quality of its meat for its high protein content and excellent zinc/energy ratio.