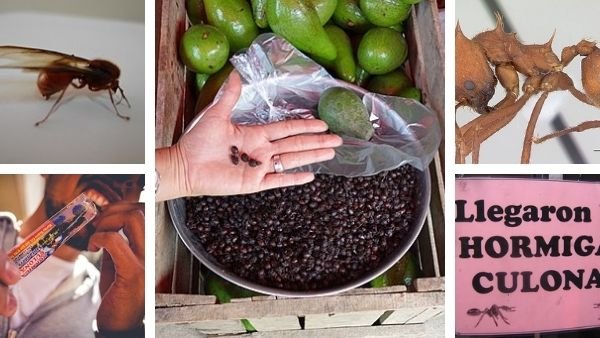 Habitat and feeding of big-ass ants

This insect lives in anthills, made of mud and conical in shape, which house millions of individuals. It feeds on fungi that grow on rotting leaves.

A common ingredient in the cuisine of the Amazon region

The big-assed ants belong to the group of cutter ants that, together with Atta sexdens and Atta cephalotes, are part of the edible insectsconsumed throughout the Amazon basin.

They call it culona ant in Amazonas-Colombia.

That “ass” corresponds, in reality, to the abdomen, which contains a white fat rich in nutrients.

In Central America it is called zompopo de mayo.

The culona or siquisapa ant abounds in Moyobamba and Rioja, in the department of San Martín in Peru, during the rainy season in October and November, when they come out of their anthills or hills.

Then, they are caught by the collectors, at dawn, protecting themselves from their strong pincers with old clothes and with fire, singeing them.

The indigenous communities located on the right bank of the Marañón River eat them roasted or toasted, after discarding wings and legs, accompanying them with sweet or cooked yucca.

They sell them in the markets of Tarapoto, Lamas and Moyobamba, in the San Martín region, in the Peruvian Amazon.

They use it as an ingredient in several dishes in regional cuisine, as well as in pizzas and even in drinks, due to its aphrodisiac fame.

Their high price in the markets is due to the difficulty in catching them, their release only once a year and their nutritional value (rich in unsaturated fats, about 67 to 70%).

In the Venezuelan Amazon, the indigenous people eat this species of dried, smoked, fried or toasted ant.

With it they make at least two types of sauces, one they call wuarubéand another, of more diversified use, known as catara.

Catara is prepared with cooked yare hot pepper and salt to season meals or to accompany the consumption of cassava.

A popular meal in the Venezuelan Amazon is prepared with bachaco culón roasted in a clay budare.

The Atta laevigataant species is widely consumed in the Colombian Amazon and even outside of it, such is the case of the culona ants that are consumed in the department of Santander, Colombia, and particularly in Bucaramanga.

A typical preparation of the department of Vaupés is made by mixing roasted and mashed ant culona with ground cassava or fariña.

Hot sauces made with ass ants

The wuarubé is a typical sauce of some indigenous peoples of the state of Amazonas, in the Venezuelan Amazon, reputed as an aphrodisiac.

This sauce is prepared with yare, the juice of bitter yucca, which is cooked slightly and mixed with roasted and ground bachaco culón and very hot pepper. In this case, the screw pepper, murupí or murabí is used.

Catara is a hot sauce, reputed to be an aphrodisiac, made by some native Brazilian, Colombian and Venezuelan Amazonian indigenous communities, using as ingredients roasted and ground hot pepper, bachaco culón or culona ant (Atta laevigata), which contains formic acid, and the bitter and poisonous liquid obtained by twisting the bitter cassava, which is known as tucupi (BRA), tukano (COL) or yare (VEN). The latter is boiled to remove the poisonous hydrocyanic acid.

Some add salt. Some communities, such as the Maipure, from the Venezuelan Amazon, call it Teuaka.