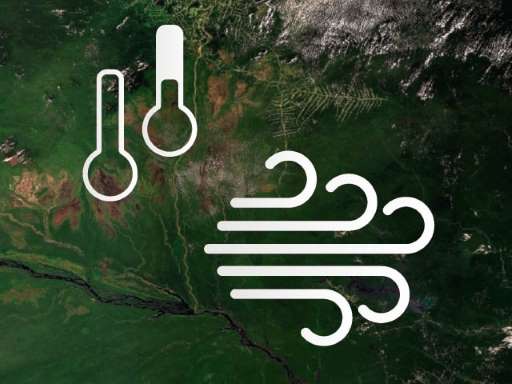 In the Amazon rainforest the climate is stiflingly hot, depending on the altitude (jungle, high jungle or low jungle).

The Amazon climate is warmer in the lowland rainforest, below 800 meters above sea level.

Typical phenomena of the Amazon climate:

The climate of the Amazon presents surprising phenomena such as the Friajes or Surazos (winter storms), San Juan Colds, Santa Rosa Colds, and the Cyclone. One is a wind coming from Antarctica, the other is an opposite phenomenon.

A winter storm in the Amazon Rainforest

However, in the days leading up to June 21, a series of heavy rains occurred almost untimely and the ambient temperature dropped significantly.

It is a phenomenon known as friaje or infiernillo in the Peruvian Amazon; surazo in the Bolivian jungle; aru in Colombia; friagem in Brazil, and when it begins in the Southern Cone countries, it is called winter storm in Argentina and Chile.

Three years later, in 2013, the temperature reached 14°C in Puerto Maldonado, in the Madre de Dios region, in the southeast of the country.

Four years later, in 2017, the temperature reached 12 °C in Loreto, in the northeast. This cold is produced with great intensity every year, during several days in the months of June to July, due to the displacement of cold winds from Antarctica. But it also occurs at other times of the year.

This strange phenomenon, typical of the Amazon climate, crosses the continent from south to north along a well-known route through several countries.

The cold air goes from south to north, passing through Argentina, Uruguay, Paraguay and Brazil, and enters Peru through the southern jungle, specifically through the Madre de Dios region, whose capital is Puerto Maldonado. It then moves to the central jungle, and then to the north, although its intensity decreases.

In the case of the Bolivian Amazon, surazos can occur between May and September, when the temperature drops significantly, especially in the southernmost regions of the country.

When the cold weather is coming…

Intense rains, thunderstorms and strong winds almost always precede friaje. After the rain ends, the sky is clear and the presence of the cold is felt, with the temperature dropping sharply by several degrees.

This drop in temperature is felt more in the lowland rainforest than in the highland rainforest. Temperatures can drop below 11°C, bringing with it the fear of pneumonia and flu, which can be very dangerous for vulnerable groups in many jungle communities, especially children and the elderly.

Official agencies warn the population several days before the occurrence of the cold weather, through the press and radio, so that the population takes the necessary precautions and takes shelter.

The “friaje” or “surazo” is produced by the South Atlantic anticyclone, off the coast of Argentina, which transports large masses of humid air that reaches the Amazon jungle in the southeast of the country, also causing precipitation on the Andean flank. This phenomenon occurs during the period between May and September of each year.

Another typical phenomenon of the Amazon climate…

Another climatic phenomenon, in contrast to the previous one, is the cyclone that forms inside the Amazon, producing low pressure air masses, warm and humid, which is responsible for strong heat waves and intense rainfall.

Each year there are several periods of cold spells, with an average duration of three to seven days each.

This phenomenon is known as San Juan, because it occurs around the days that celebrate the feast of St. John, the patron saint of the Amazon, on June 24 of each year, so it is known as the “cold of San Juan”.

But it is also called “Santa Rosa cold”, around September. This cold is felt more intensely in the lowland rainforest, due to the high humidity of the environment, which causes it to intensify.

This phenomenon not only occurs in the vicinity of St. John’s Day, but can also occur several times a year, in the period from May to September, as happens in the Madre de Dios region, in the southeast, where the reduction in temperature has reached up to 10 ° C.

The polar winds come from Antarctica, in the extreme south, which has the coldest climate on the planet, with temperatures as low as -89. 2 °C in 1983.

The Argentine writer Federico Bianchini wrote a chronicle about Antarctica, published by Tusquets in 2017, in which he recounts the harshness and violence of the cold winds that move from west to east, at speeds that can reach up to 320 km per hour, and that affect the global climate, producing, as they pass through the Amazon, temperature cooling phenomena such as friaje, surazo, friagem and aru.

Flora and fauna of the Amazon