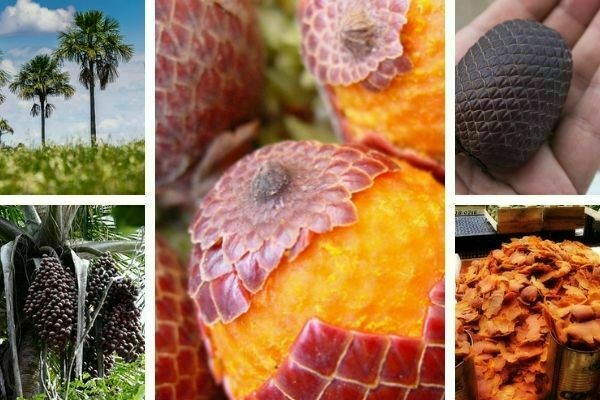 Buriti or, by its scientific name, Mauritia flexuosa is one of the most abundant and useful palm species in the Amazon basin.

Because it is widely distributed, buriti has many common names: aguaje in Peru, morete in Ecuador, buriti or muriti in Brazil, royal palm in Bolivia and moriche in Colombia and Venezuela.

Characteristics of buriti or aguaje.

One of its main characteristics is that it grows in flooded or poorly drained soils, forming patches or concentrations called aguajales or morichales, which are home to a variety of wildlife.

The plant is dioecious (of separate sexes), producing fruits every two years, more the female plant than the male.

But in an aguajal there will always be an annual harvest at the population level.

The first harvest of this species occurs at eight years of age, and continues until 40 or 50 years of age (Comité de Protección Maynani 2011, Brewer-Carías 2013).

In an aguajal there is an average of 265 aguajes per hectare.

The fruit of the aguaje is a drupe, with a scaly, wine-red or dark red shell.

Its shape ranges from oblong to subglobose, from 3 to 5 cm long, with a weight that varies from 40 to 80 grams.

The epicarp is scaly, brown to dark red.

The mesocarp is soft, fleshy and oily.

The pulp is edible, with a soft texture and sweet and sour taste, it is rich in vitamin A. Its color varies from orange to reddish orange.

The pulp represents 12 to 13 percent of the dry weight of the fruit.

The indigenous people eat it directly, after removing the peel.

This fruit has become a characteristic ingredient in many representative recipes of the Amazonian cuisine, such as:

It is customary to boil the fruit in water for about fifteen minutes to form a paste which is used to make a drink called “aguaje maduro” in the Peruvian Amazon.

This buriti or moriche paste is also used as a base to prepare a soft drink, aguajina, by adding sugar water.

Sweets made with buriti

Buriti, moriche or aguaje is also used to make candy or ice cream, or curichis (presented in a plastic wrapper to suck).

In some parts, the fermented paste is used to make alcoholic beverages: masato, chicha or caisuma.

The same palm with a diversity of fruits?

The aguaje or moriche offers, even in the same species, different types of fruits, in terms of shape, color and size.

The fruit with red flesh or pulp is considered of higher quality, due to its flavor and appearance. It is known as aguaje shambo.

The one with yellow meat is called ponguete.

Collectors point out, however, that there are three types of aguaje based on the color of the fruit mesocarp: yellow, “colored” (when the external part of the mesocarp is red and the rest is yellow), and red or shambo (Comité de Protección Maynani 2011).

From the tender inflorescence of the palm a sweet-tasting sap is obtained, which is consumed naturally or left to ferment to prepare an alcoholic beverage, or boiled until a sugary residue remains, which is used as a sweetener in the jungle.

From the terminal part of the meristem of the heart of the palm, or bud, the palm heart is obtained, whitish or ivory in color, with a firm texture and delicate flavor, used as an ingredient in tropical salads.

The Warao Indians, who live in the Orinoco River delta, prepare an edible flour by grinding the starchy pith of the palm stem. With that flour, they prepare tortillas called yuruma (Brewer-Carías 2013: 27).

An oil with a high oleic acid content is extracted from the drupe. A plant producing about 200 kg of fruit per year yields about 3 kg of oil. Its mucilage is used in the food industry as a thickener.

From this palm, known in Venezuela and Colombia as moriche, a shampoo is also produced that takes advantage of this oil to provide shiny and healthy hair.

Aguaje in capsules and powder

Other companies have also launched product lines originating in South America in capsule or powder form to facilitate the intake of their nutritional sources by adapting them to the global market.

Why do they call it the “tree of life”?

The palm not only provides food. Among the many uses of mauritia flexuosa or buriti are:

Because of its great usefulness, the German scholar Alexander von Humboldt called this palm the “tree of life” in 1800.

The ecological impact of cutting down this plant

Indeed, this species is the most economically important in the entire Amazon basin.

Due to the high height of the plant, harvesting the fruit in bunches presents great risks.

Hence, it is preferred to demolish the plant, producing imbalances in the ecosystem of the site (Cartay 2016).

The largest quantity of fruit is produced by the female palm. Therefore, the tendency is to cut down the female plants, leaving the aguajal mostly limited to male plants.

For this reason, research is being done on a more adequate management of the plant, in order to reduce the extractive pressure on the species. (González-Caral et al, 2006).

By cutting the palm, the sustainability of the species is put at high risk, causing negative impacts on the forest, people and fauna of the region (Penn 1990).

There is a very close relationship between the species, which grows in aguajales, and the ungulate terrestrial animals of the forest, such as the tapir, sachavaca or danta (Tapirus terrestris) and the collared peccary peccary (Tayassu tajacu), the huangana (Tayassu pecari), some species of large rodents , such as the ronsoco(Hidrochoeris hidrochaeris)the majaz(Agouti paca) and the añuje (Dasyprocta fuliginosa), which consume it.

The fruits also serve as fish food during the flood season. Such is the case of the gamitana (Colossoma macropomum), the paco(Piaractus brachipomus) and the paiche (Arapaima gigas).

When the palm is felled, the possibility of sustenance for these animal species is reduced and they have to migrate due to the scarcity of food.

In addition, as these animals are important for the spread of the palm seedlings, which they eat and then expel by propagating them in the forest (Valdivia 1995, Comité de Protección Maynani 2011).

In the Peruvian Amazon, consumption is highest in Iquitos, followed by Pucallpa and Tarapoto.

The highest consumption occurs in the city of Iquitos, capital of the Loreto region. Between 22 and almost 23 MT are consumed there every day, offered on the street by street vendors in different presentations: pulp for direct consumption, or as aguajina, lollipops, ice cream or curichis.

The aguaje is offered in the urban Amazonian market by various actors.

The collectors The extractors, also called extractores or acopiadores, negotiate with the wholesalers (who live in Iquitos and hire the extractors) and the rematistas (who buy the products in cash from the river boats and negotiate them on the rivers before arriving in Iquitos).

Then come the retailers, located in the city markets, who sell to the public or to processors, who prepare aguaje by-products (aguajina, ice cream, curichi or chupete) (Comité de Protección Maynani 2011: 27-28).

A selection of tree species from the Amazon: list of medicinal, healing, aphrodisiac, timber and edible Amazonian trees