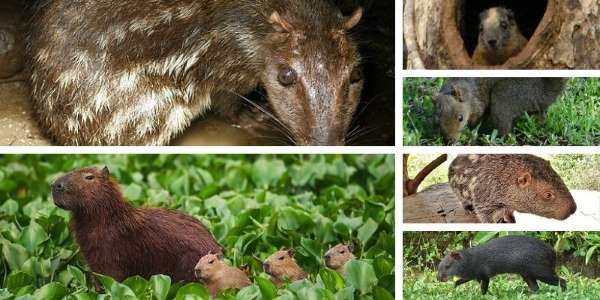 Meet the main rodents of the Amazon Rainforest; from small squirrels or guinea pigs to the largest rodent in the world: the capybara ( Hydrochoerus hydrochaeris)

Rodents (Rodentia) are an order of placental mammals that groups some 2,280 species, constituting the largest order of all mammals.

They range from very small species such as the harvest mouse ( Micromy minutus ), barely 50 mm long and weighing 7 g, to the capybara.

These small mammals are distributed throughout the planet, except in Antarctica. However, despite the breadth of its geographical distribution, most of the time its distribution is restricted.

Many species are endemic, typical or exclusive to the region they inhabit.

The most notable feature of rodents is the conformation of their teeth, due to the presence of a pair of incisor teeth in the upper and lower jaws, and the lack of canines.

Those teeth are sharp, wear down and never stop growing. With those teeth they gnaw and defend themselves from their predators.

Below we mention the main 10 species of rodents in the Amazon Rainforest.

The agouti is a large rodent, native to the tropical regions of America, about 60 to 80 cm long and 5 to 10 kg in weight, with a color that varies from black to brown.

Inhabits burrows or fallen hollow logs. It feeds on tuberous roots, such as yucca , and palm fruits, and is feared and persecuted for preying on yuca trees.

Of nocturnal habits, it feeds on fruits, leaves, roots and bark. Give birth a couple of pups each time, after a gestation period of three months. Its meat is soft, edible, and pleasant in taste.

It is object of intense and indiscriminate commercial hunting that has made the species very vulnerable, and also by the indigenous people , who accuse it of being a great predator of the crops on their farms .

It breeds easily in captivity and commercial farming is feasible.

It is an arboreal rodent mammal, about 25 cm long and with a 20 cm tail. Its body has dense, reddish fur and a long, bushy tail. It generally feeds on seeds and nuts.

Its name in Quechua is shitupi.

It is known as a squirrel throughout the Amazon basin.

Its meat is edible.

Small squirrel, with a long tail, larger than its body, which does not exceed 60 cm in length, and with dark or reddish fur.

The so-called Little Squirrel ( Microsciurus flaviventer ) is another arboreal rodent mammal, slightly smaller than the common squirrel, with generally reddish fur and a long, bushy tail, with fast movements, it commonly feeds on seeds and nuts. It is hunt because of its edible meat.

Rodent widely distributed throughout the Amazon basin , with long tail, nocturnal habits, which feeds on the leaves of plants, such as bamboo, that grow on the banks of rivers, in areas of várzea or igapó.

It is among the animal species considered vulnerable due to the pressure exerted by hunting, as its meat is edible too.

Also called acure and curí in Venezuela, the guinea pig is a small rodent or guinea pig, domesticated in the Andean regions, which is raised in the corners, or cututos, in nests made with hollowed out herbs and maguey placed in Andean kitchens, near the stove, and with which various regional dishes are made.

It is not an Amazonian culinary ingredient, but it is consumed in some areas of the jungle , such as those that exist in the Amazon region of Peru .

There, some typical dishes are made with it, such as guinea pig cangado or chapchap, opened longitudinally and roasted over embers, until obtaining a crispy texture. /ECU.

Typical dish of the gastronomy of the mountains, such as Ambato, Imbabura, and in particular in the Ficoa neighborhood, where they prepare it roasted and broaster style, just as they do in Chaltura. The roast guinea pig prepared in Sangolqui, near Quito, is also famous.

Large wild rodent, the second largest Amazonian rodent in the jungle, after the capybara ( Hydrochaeris hydrochaeris ).

Its body is brown on the back and reddish on the rest of the body, with whitish spots on the back. Of nocturnal habits, terrestrial and solitary.

It sleeps in burrows up to 2 m deep or in holes in fallen logs.

Rodent about 50 cm long, with a flattened head and large in relation to the rest of the body, and with a tail of up to 17 cm.

Its fur is gray or black.

of nocturnal habits. It is captured for its edible meat.

Very rare rodent, herbivorous, black skin with white spots, large head and tail about 10 cm. Its edible meat is highly valued, which is why it has been subjected to constant and indiscriminate hunting.

It has both diurnal and nocturnal habits and is solitary. There is a variety of punchana known as tintín (Myoprocta pratti).

The capybara is the largest rodent in the world, very important throughout the Amazon basin, up to 1 m long and about 60 kg in weight. The color of its long and rough coat varies between yellowish and reddish brown. The head is broad, with a blunt snout, cleft upper lip, small ears, and a short neck.

We conclude our list of Amazon rodents with this small wild rodent, similar to the guinea pig, which they call wild mouse or wild guinea pig, with thick brown fur and a small tail.

It feeds on grains and tubers in the fields and its meat is edible.