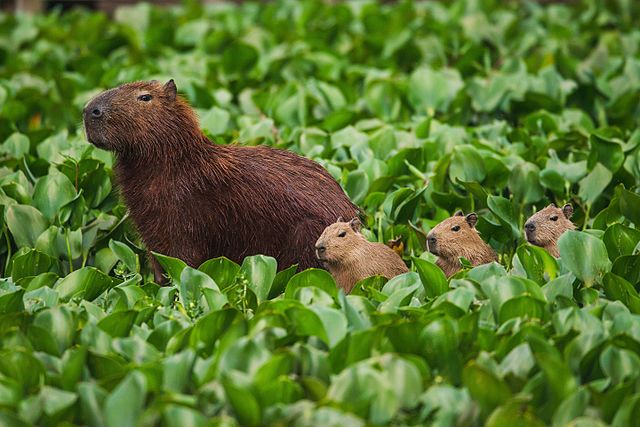 Hydrochoerus hydrochaeris is the only living representative of the Hydrochoeridae family.

Some classify it within the Caviidae group. There it is classified, within the rodents, in the cavioideus super family, together with other Amazonian rodents, such as agoutis (Dasyproctidae), pacas(Cuniculidae) and pacaranas (Dinomydae).

Their ancestors belonged to the Protohydrochoerus subfamily, which lived in the Pliocene.

Then to the subfamily of the Hydrokerines, to which the Hydrochoerus hydrochaeris is affiliated, which appeared in the Upper Pliocene.

How did the capybara evolve?

The capybara evolved in America from the Cenozoicera, which dates back 65 million years, to the present day.

The first modern rodents appeared 58 million years ago. In the Miocene epoch, in the Cenozoic era, evolution produced the divergence between the Eocardidae and the Hydrochaeridae, which were the ancient capybara.

The common ancestor was the Cardiatherinae, which was twice the size of today’s capybaras.

All the giant rodents that we find in the Amazon basin are native to the American continent.

Description of the capybara

The capybara is an animal of the Cávidos family. It is the largest and heaviest rodent in the world. His body is solid and rounded. Some say it is barrel-shaped. Its head is small.

The ears are small and round. The eyes are small. Their eyes, ears, and nostrils are arranged on the top of their heads, a feature common to partially amphibian animals.

It has twenty teeth. His snout is blunt. It has four short legs, but the rear ones are slightly longer than the front ones. His feet are slightly webbed. It lacks a tail.

The capybara grows up to 1.30 m long and weighs about 65 kg, with an average weight of 50 kg. The female is slightly larger than the male.

The fur of this species is thick and rough, although in some parts it is scarce. For that reason it is sometimes prone to heatstroke.

The capybara’s skin is pink, and impervious to water.

Where does the capybara live?

The capybara is widely distributed throughout South America. Particularly in the basins of the Orinoco, Amazon and La Plata rivers.

From Venezuela to the north and center of Argentina. The only exception is Chile.

The capybara is a terrestrial animal, but it prefers to live near bodies of water, or in flooded areas.

It adapts very well to life in large plains and humid areas. It is preferably found in the extensive region of the plains of Venezuela, bathed by tributaries of the Orinoco River, and in the area of El Pantanal, in Brazil.

The chigüire or capibara is an animal of twilight habits, with a great adaptive capacity. But avoid the hours of greatest sun exposure.

During that time it is protected. Rests in areas of dense vegetation. If there is a lot of human activity that compromises its safety, the capybara changes its behavior, developing nocturnal habits.

If it notices dangerous situations, the capybara alerts the others in its group by emitting short barks so that they can quickly escape. They run towards bodies of water, such as nearby rivers to dive into their waters.

They can stay up to 5 meters. underwater, and swim quickly to evade the threat. They are excellent swimmers. They swim submerged in the water, keeping their eyes, ears and nostrils out of the water.

The capybara is a gregarious animal. It generally lives in groups, ranging from six to twenty individuals.

Although in some cases it can reach a hundred during the dry season, in search of water. So, they are very vulnerable to predators, especially humans.

The capybara is a territorial animal. The males mark their territory with secretions from their scent glands, which are located near the nose, or in the region of the anus.

They communicate with their mates by vocalizations, such as a dog-like bark as an alarm signal, or purr to show submission, or emit shrill growls and hisses.

What does the capybara eat?

They feed on wild terrestrial herbs and aquatic plants. Also crop grains, for which they are persecuted. They eat in moderation.

They consume between four and six species of plants during a certain period, without exhausting them. Luego, las dejan de comer para facilitar su recuperación. They are special coprophagous.

They eat faeces, but immediately after its evacuation, as many rodents usually do. It is a way to reabsorb the nutrients already eaten, to make the most of the available nutrients.

The longevity of the capybaras extends from eight to ten years, although they can reach twelve years of life, subjected to the captivity regime.

The natural predators of capybaras are felids, such as jaguar, puma, ocelot, or jungle foxes, alligatorsand anacondas. Their young can be preyed upon by birds of prey, such as the harpy eagle.

Specialists in this animal species point out that there are three basic requirements for the survival of the species. The first is to guarantee the availability of nearby aquatic environments.

Water is very important for the capybara: for its reproduction, protection and the thermoregulation of its body.

The indigenous people hunt the capybara to consume its meat and use its skin. Some groups reject meat, because it seems to them to have a very unpleasant smell and because it is believed that its consumption produces stains on the body.

Some indigenous groups hunt them for their meat, their skin and their teeth, which they use as decorative elements. From its fat they extract an oil, which is considered medicinal.

It is common in the plains for large killings of capybaras during the dry season, when many individuals are concentrated. The capybaras are cruelly killed, clubbed or shot, indiscriminately.

Or using hunting dogs that harass them to death. Many indigenous people have capybara calves in their homes, which adapt very easily to domestic rearing.

The capybara in the indigenous worldview

Some indigenous groups respect the capybara. The Yanomami, indigenous people located in Brazil and Venezuela, believe that each person has a double that looks like a capybara or a tapir (Tapirus terrestrials), which provides them with their life force.

Is the hydrochoerus hydrochaeris in danger of extinction?

In nearby urban areas, and depending on the country, the meat or the skin is used, or both at the same time. Its meat is a highly valued consumption in some countries, especially during the Easter season, on days of abstinence from meat, considering that capybara meat is allowed from the point of view of the Catholic religion.

This is the case of Venezuela and Colombia, countries in which the meat is previously dried, and then consumed pickled or pisillo. In Argentina, Brazil and Uruguay, capybara meat is used to make sausages.

In Argentina, leather is used more, and they are experts in the art of high-quality leather goods, and their leather processing technology is highly recognized internationally.

In Venezuela, Colombia and Brazil they take advantage of the meat, although the Brazilians are also experts in saddlery with capybara skin (they write it with V, in Portuguese).

Venezuela has, or had, the best experiences of semi-intensive free-living farming, because the privately owned herds dedicated to this activity of conservation and ecological tourism, such as the El Frío herd, were intervened and looted.

The best captive breeding experience is mainly in Brazil and Argentina. Leather goods based on capybara leather are of high quality in Argentina, Colombia and Brazil.

Capybaras mate in shallow water. Intercourse is brief and can be repeated several times, after a while.

Mating occurs during any time of the year, but most births occur in the rainy season. Each female gives birth once a year, and exceptionally twice.

The gestation period lasts about 110 days. The females are multiparous, and have an average litter of four pups, between two and eight per birth.