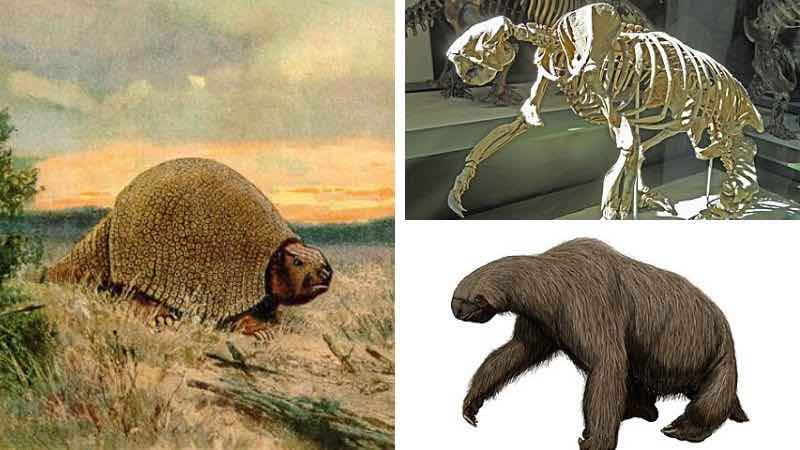 In the Cenozoic Era, giant animals existed in the Amazon and fossils have been found that allow us to recreate them today. However, these animals are NOT dinosaurs, no matter how big they are, but extinct species or not, with particular classifications.

In fact, some of these giant animal species still live in the Amazon and are very common as we will see below.

But before we dive into the Cenozoic Era, let’s recap.

We have seen a brief history of the Amazon landscape where we explained how the Amazon was formed from Pangea to the present day.

Until the Mesozoic, formed by the Triassic, Jurassic and Cretaceous periods, large animals such as dinosaurs predominated.

In the Triassic (from 230 million years ago) the first dinosaurs appeared.

In the Jurassic (190 million years ago), dinosaurs, birds and mammals abound. We are still in Pangea.

In the Cretaceous (135 million years ago) flowering plants appear and dinosaurs become extinct.

The separation of Gondwana occurs, and in the end the Andes rise.

The Cenozoic Era is a very important time from the point of view of fauna and flora.

It is a geological era, which goes from 70 million years ago to the present day, formed by the Tertiary and Quaternary periods, in which placental mammals, horses, whales, bats and monkeys, up to the genus Homo, appeared throughout its different epochs.

From a geological and climatic point of view, this era saw the union of North and South America, the Ice Age and the Interglacial period.

Animals of the Cenozoic Era in the Amazon

During the Tertiary period of the Cenozoic Era, in the Eocene and middle Miocene, a fauna of marsupials, armadillos, anteaters, sloths and native ungulates developed in the Amazon basin.

Some caviomorph rodents also emerged at that time, such as the current capybara, ronsoco or chigüiro (Hydrochaerus hidrochaeris), one of the oldest animals in South America, which arrived from Africa some 42 million years ago.

Some 13 million years ago, the Amazon was inhabited by pink dolphins of the genus Inia and several species of crocodiles, such as the dwarf caiman(Paleosuchus), the large Purussaurus and the duck-billed caiman(Mourasuchus).

There is, then, a great variety of insects and arachnids.

Caimans, gavials and turtles were already living in the waters of the Amazon.

This Amazonian fauna was the result of an active American biotic exchange between the fauna of North and South America, through Central America, facilitated by the formation of the Isthmus of Panama, between 3.1 and 2.7 million years ago.

Alexander von Humboldt found, for example, a mastodon molar on the slopes of the Imbabura volcano, in the Ecuadorian province of Imbabura.

Then, in 1922, the priest Dr. Juan Félix Proaño found a mastodon, which he named Masthodon chimborazi, in the vicinity of Ríobamba, in the Ecuadorian province of Chimborazo.

These two provinces are located in the highlands of Ecuador.

As large animals, such as dinosaurs, disappeared, others, also of large size, emerged at the beginning of the Miocene, some 23 million years ago. They were crocodiles, sloths and giant armadillos.

The larger animals died, while the small and medium-sized ones survived, feeding mainly on insects and aquatic plants.

After the death of large predators, such as dinosaurs, competition for food and space decreased, and a diverse fauna thrived and populated the tropical forests.

Giant crocodiles found in the Amazon

Guerra-Turin (2011) mentions the existence of a large crocodile or caiman that was about 14 meters long and weighed about 9 tons.

He says his head was 1.3 m. He points out that this crocodile, found during an expedition financed by the University of Toulouse and the French company Devanlay, was the largest predator in the Amazon when, instead of the jungle, the depression was covered by the sea some 15 million years ago.

At that time in the Amazon there was a variety of crocodiles.

A team of paleontologists, who published their finding in the journal Proceedings B, of the Royal Society, discovered in 2014 in the Peruvian jungle, in the department of Loreto, some fossils of seven species of crocodiles, which lived there about 13 million years ago.

In 2011, Peruvian and Austrian paleontologists, led by Austrian Klaus Honninger, discovered in Loreto, Peru, the fossilized remains of a giant crocodile that is nearly 20 million years old.

Many of these findings are not well documented in specialized scientific journals, with the exception of National Geographic, and the press is the medium generally used to record these discoveries.

In Acre, in the Brazilian Amazon, the jawbone of a purussaurus was found , which is a giant crocodile, about 12 m long, that lived more than 8 million years ago in swamps and rivers of the Amazon rainforest.

What are fossils? What are they for? How are they formed? Types, examples, names. How to differentiate a dinosaur from other giant animals?