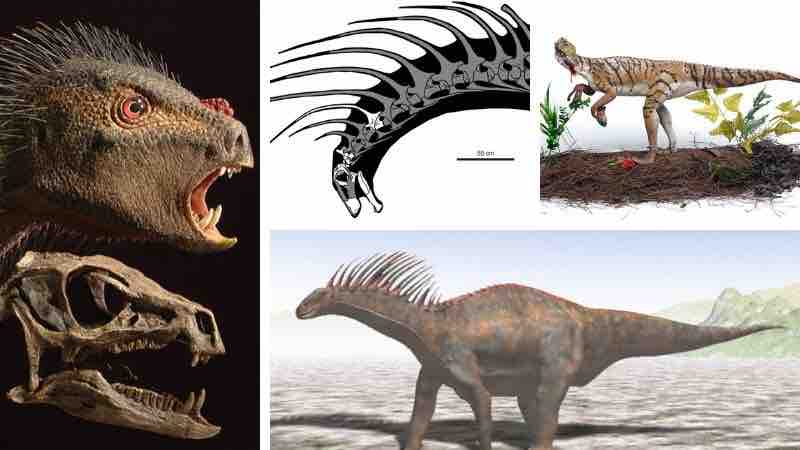 Until relatively recently there was very little evidence for the existence of dinosaurs and other large prehistoric animals in the Americas, and in the Amazon in particular.

It should be remembered that dinosaurs existed during the Mesozoic Era, during the Triassic and Jurassic periods, when the supercontinent Pangaea (Colbert) still existed.

Dinosaurs became extinct in the Cretaceous, when Gondwana was beginning to separate, the Andes Mountains were beginning to rise, and the Amazon basin did not yet exist.

Guerra-Turín (2011) mentions that there were dinosaurs in the Upper Cretaceous period, at the end of the Cretaceous, in the part where the Central Andes mountain range protruded, and then south of the mountain range.

It was thought that there was little evidence of fossil finds to corroborate the presence of dinosaurs in South America.

However, over time, more and more discoveries have been reported.

Salinas, Juárez, Fiorelli (2005) point out that the dinosaurs found in South America since the end of the 19th century correspond to saurischian dinosaurs.

Then, since the end of the 20th century, some ornithischian dinosaurs began to be found, particularly in Argentine Patagonia, where they lived during the Upper Triassic and Upper Jurassic periods.

Some pieces of Pisanosaurus and Lesothosaurus were also found in Argentina and Venezuela, and of Heterodontosaurus in Argentina.

Tracks attributable to Hadrosauriformes were also found in Argentina and Bolivia.

Moreno, Blanco, Tomlison (2004) report the discovery in northern Chile of footprints from dinosaurs that lived during the Upper Jurassic, adding that there is a lack of fossil remains of Jurassic Titanosaurids in South America.

In Central America, specifically in Honduras, in 1971, a femur corresponding to an ornithopod dinosaur, hadrosauroid, was discovered in Camayagua, Honduras (Zúñiga 2019).

One of the most important finds of dinosaur remains in South America, and confirmation that large saurians inhabited the region that is now the Brazilian Amazon, were those found in the Maranon region of northeastern Brazil in 2003.

It was a sauropod belonging to the family Diplodocoidea, and is related to Diplodocus, which was about 40 m long.

In the south of Brazil, in Sao Joao de Polesine, researchers from the Federal Universities of Santa Maria and Sao Paulo found the fossil of the Gnatovorax cabreirai, a carnivorous dinosaur that lived about 230 million years ago, in the Triassic period, when South America was still part of the supercontinent Pangaea, making it one of the oldest dinosaurs in the world.

This dinosaur was a very active predator, with great balance and highly developed vision, and had numerous sharp, serrated teeth and long, powerful claws.

Fossils of two more dinosaur species have been found in Brazilian territory.

One is the Buriolestes schultzia carnivorous dinosaur, measuring 1.5 m, and belonging to one of the primitive carnivorous dinosaur families known as Herrerasauridae. It is not known to be an ancestor of the Jurassic and Cretaceous superpredators, such as Tyrannosaurus rex, which devoured other smaller Triassic period saurians, such as the rhinosaurus and the cynodont (considered an ancestor of current mammals). 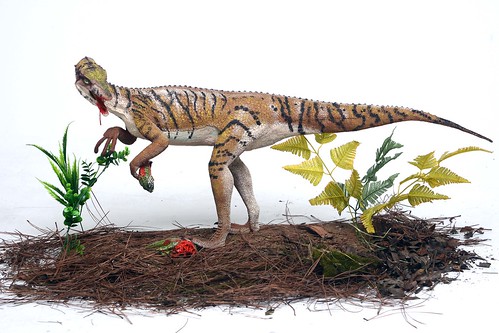 The other, found in 1936, is Staurikosaurus pricei, of the Herrerasauridae group, which was a very small and agile carnivorous species.

Calvo and Bonaparte (1991) noted that in 1987 the remains of a sauropod Titanosauridae were extracted from the Río Limay Formation in the Argentine province of Neuquén, stating that the most numerous and varied records of the Titanosauridae subfamily have been obtained in South America.

Among them, a sauropod Titanosauridae , which represents a primitive clade of that family.

They also indicated that in Gondwana the Titanosaurs dominated, while in Laurasia, in the Late Cretaceous, the ornithischians stood out.

A few decades later, in 2005, Salinas, Juárez-Vallieri, Fiorelli (2005), with a larger inventory of studied fossils, considered that dinosaur finds in South America since the end of the 19th century correspond to saurischian dinosaurs, while ornithischian dinosaur finds were rare towards the end of the 19th century, when some dinosaurs of this group were found in Argentina and Venezuela.

In Bolivia, in addition, footprints attributable to hadrosauriformes, of the ornithopod group, were found.

In Argentina, apart from the Titanosauridae, other dinosaurs of great importance have been discovered, such as Bajadasaurus pronuspinax, found in 2013, which had a fan of giant spines, averaging 1.20 m each, protruding from its neck and back.

It had about 20 spines, which were projections of bone, probably reinforced with keratin, protruding from the top of the neck vertebrae.

This dinosaur belonged to the group of sauropods, which were large herbivore quadrupeds.

A close relative of this dinosaur was the large spine-bearing Amargasaurus , which lived some 15 to 20 million years later.

Why have so many dinosaur fossils been found in Neuquén?

Many dinosaur species have been found in Argentine Patagonia. And in that territory, especially in Neuquén, they have left their mark.

When the Andes rose, due to the collision of tectonic plates, some 70 million years ago, the emerging mountain range lifted territory from the bottom and exposed a large surface.

Then the strong wind eroded it, exposing it even more.

Thus, when walking in the streets of Neuquén, one is walking on material dated to the Cretaceous period.

The dry desert climate of Patagonia helped to preserve the fossils. All this is very different from the soil of the Amazon basin, which is covered with thick vegetation and where it is very difficult to find fossils.

However, hidden there is an interesting history of the evolution of the planet more than 140 million years ago.

Some paleontologists have put forward the thesis that primitive dinosaurs, that is, the first to appear, developed during the Triassic period, when the supercontinent Pangaea still existed.

They argue that these dinosaurs first appeared in Pangea, in what is now South America. And then from there they dispersed throughout the supercontinent.

They base their thesis on the fact that the oldest theropod dinosaurs were found there, corresponding to the Late Jurassic about 214 million years ago, and that they are rare.

Indeed, the discovery in 2009 of a theropod on a ranch in New Mexico ties in with an earlier discovery in Argentina of the skeleton of the herrerasaurus, also a theropod, in the 1960s (El País, Madrid, 10.12. 2009).

What are fossils? What are they for? How are they formed? Types, examples, names. How to differentiate a dinosaur from other giant animals?