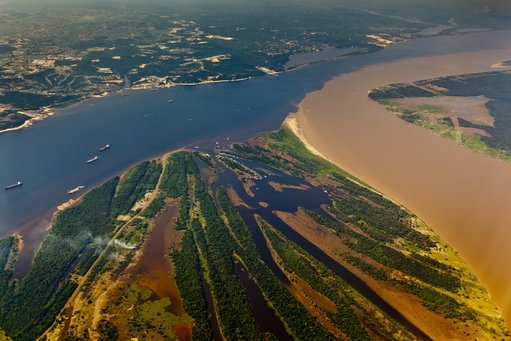 In this article we present a list of the main Amazonian rivers in alphabetical order, a classification according to their flow and water movement, another way to classify them according to the color of their waters and finally we describe a research that determined that the Rio Negro was not really black.

Main tributaries of the Amazon River from A to Z:

Or we can also classify them by the color of their waters and their physical characteristics following a hydrographic criterion, as Professor Rafael Cartay did in the following article:

Affluents of the Amazon River classified by the color of their waters.

Most people think that rivers, or rather that their waters, have the same color everywhere and are amazed at how a river of one color falls into another river, with another color, and both march together, in parallel, for a long stretch without coming together.

The meeting of the waters

This happens in the Amazon when, for example, the Negro River flows into the Amazon River, or Solimoes, as it is called in Brazil.

More about the Meeting of the Waters

Types of rivers in the Amazon Basin:

That is the first difference.

The lotic environments correspond to watercourses with high flow rates and displacement movement, such as the rivers of the Amazon.

The lentic define watercourses of lower flow and movement, such as Amazonian lagoons and oxbow lakes.

Another difference is the chemical characteristics of the river waters.

The Amazonian rivers closer to the Andean peaks, where they are born, carry suspended sediments that make them rich in nutrients and more productive in fish, which is not the case of the rivers born in the Amazon, which are less biologically rich.

4 categories to differentiate the rivers of the Amazon according to their color.

The RABs originate in the Andes Mountains, and have long routes, passing through various types of soils. Its waters are muddy, turbid, due to the clay, sand and silt they carry. This gives its waters a brown coloration and enriches them with nutrients, favoring the abundance of fish, shellfish, chelonians, some mammals and zooplankton. There are the great Amazonian rivers: Amazon, Ucayali, Marañon, Napo, Pastaza, Huallaga, Putumayo.

The RANs are tributaries of the large RABs, and originate within the rainforest. Its waters are dark brown in color, have an acid pH and few nutrients. These rivers are poor in fish and other aquatic species. People call them “rivers of hunger”. These include the Nanay, Itaya, Pacaya, Samiria, Chambira, Cuininico, Nucuray and Tapiche rivers.

RAMs share characteristics with RABs and RANs. Its waters range in color from light brown to yellowish green, and generally originate in the Ecuadorian and Peruvian Andean foothills. Among them, the Macusari and Corrientes rivers.

The RACs are rivers with crystalline waters due to the fact that they carry few materials in suspension, and have a low nutrient and fish richness. In this category are the rivers that flow in the Peruvian high jungle, tributaries of the RAB, such as the Chontayacu, Tocache, Mishollo, Cañuto, Aspuzana and Uchiza rivers.

A scientific adventure that determined that the Black River was not black.

A separate observation should be made regarding the Negro River, considered the longest black water river in the world. Carlos A. Lasso (1) carried out a very complete investigation on the fish richness of the Negro River, in its upper and lower reaches, concluding that the Negro River, despite the dark tone of its waters, cannot be considered a RAN.

He found that it lacks or has few humic acids and that its pH ranges from neutral to slightly basic, and proposed to qualify it more as a RAC for its biological characteristics. He pointed out that the dark color of its waters is due to the fact that the river flows over granitic outcrops or dark slabs. However, contrary to popular belief, its waters have a fish richness comparable to that of the RABs. In his research he reported 108 fish species. Another study by the State University of Camppinas (Unicamp, Brazil) (2) found that the inhabitants located on the right bank of the Negro River, near the city of Manaus, obtain 75% of the protein they consume in their diet from fish meat extracted from that river.

Lasso, C. A. 2001. The fishes of the upper Río Negro, Bolivian Amazon: composition and ecological and biogeographical considerations. Interciencia, Vol. 26 (No. 6), p. 237.