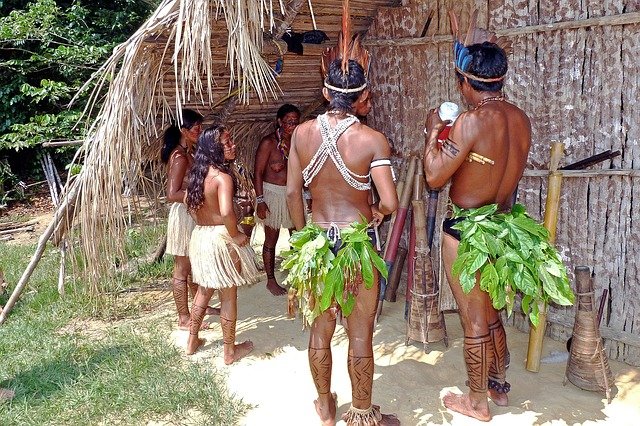 The native Amazonian indigenous communities long ago ceased to be basically hunter-gatherers.

Now they are in a superior phase, in which the sources of subsistence have diversified, with the hunting , the fishing , the collection , the farm and the family garden and, in the cases of indigenous people assimilated to the market economy and urban culture, with salaried work to procure an income that allows them to buy food.

The gatherers, or more properly, the hunter-gatherers, existed until about 10,000 years ago, in the Mesolithic period, an intermediate stage in the Stone Age, between the Paleolithic and the Neolithic.

Then, there is a great change in human life, induced mainly by changes in the climate , at the end of the great ice ages.

Man begins to leave the caves, to diversify and perfect his stone tools. It is changing its way of producing, gradually substituting harvesting, hunting and fishing for more stable activities, such as agriculture and livestock.

Before, individuals were grouped in macrobandas to procure food.

These changes were accelerated by population increases and the growing needs of these populations, making hunting and gathering activities insufficient.

Nomadism was gradually replaced by a sedentary lifestyle, and the need to settle down and stay in one place for an indefinite period of time grows.

Harvesting in the Amazon today

Today, no Amazonian society, indigenous or not, satisfies an important part of its food needs with harvesting, which has become a markedly complementary activity to food.

Perhaps the collection continues to have a great importance in daily life with the collection in the forest of products and vegetable fibers to make indigenous utensils and houses.

In the Amazonian environment, despite having an exuberant nature, it is not possible to subsist purely as a collector, unless the survival sought is a very short-term necessity. As is the case of a person momentarily lost in the jungle.

The precariousness in obtaining proteins with this activity, unless the consumption of insects is resorted to, makes this possibility difficult, and makes it almost unsustainable.

Food as a socio-cultural ritual.

Food, in human society, is basically a social act.

It does not refer only to the act of obtaining food to satisfy hunger and ensure subsistence as a species.

The human being is omnivorous. It requires different types of nutrients (carbohydrates, protein, fat, vitamins, minerals, fiber, and water), and cannot sustain itself by consuming just one type of food, nor can its diet be limited to a range of nutrients provided by foraging, which It is largely random.

In addition, the human being does not consume what he can, but what he chooses.

He chooses his food within a culture , and his food is marked with meaning by that culture. That is, symbolized.

In such a way that the edibility of a food is a biological concept (a food is what can be ingested as an acceptable material for our physiology to provide us with energy and fulfill functions in our organism, being essential for life).

But food, in addition to being accepted by biology, must be allowed by the culture in which one lives.

The triple condition of food.

Food has, therefore, a double condition, as a nutrient and as a symbol. And I would say a triple condition, adding that of medication, since everything that nourishes and acquires a cultural food significance, contributes to the health of the body and to the control of emotions.

Food, in the human sphere, is a way that the individual, the diner, has to build his body and insert himself into the world, to imagine it and himself.

Food, as a total social act, reflects the level of development and complexity of a given culture.

What is collected in the Amazon?

Only in the Peruvian Amazon there have been some 4,217 species of native plants collected that have 49 different uses, among which the most important are medicinal , edible, wood for construction, crafts, dyes and dyes, ornamental (3)(4) . Not including firewood, a male task, fundamental in the daily life of native communities, especially for cooking and smoking food.

The Amazonian fruits are numerous, especially the fruits, although unknown. Its use outside the basin is very limited, because very few are cultivated on a regular basis.

Most of the fruits that grow wild in the jungle are found seasonally and are not sold in urban markets outside the Amazonian circuit. And they will continue to be “promising fruits” until there is concerted action to cultivate them, after their agronomic characteristics and nutritional properties have been studied.

Little-known fruits (of little or no commercial exploitation)

More about the Brazil Nut: more valuable than gold

Fruits typical of the Amazon basin whose commercial exploitation has diversified in the world.

More about the fruits of the Amazon

Fruits introduced in the Amazon.

The following fruit trees were introduced to the Amazon from the time of the Spanish colonization and are now found in many parts of the basin, outside of the farms, such as in the purmas (abandoned farms): banana musaceae (Musa sapientum) and banana (Musa paradisiaca), mango (Mangifera indica), pandisho, breadfruit or tree fruit (Artocarpus altilis), carambola (Averrhoa carambola), or different varieties of citrus, among which the wrinkled lemon (Citrus jambhiri) stands out.

The Palms of the Amazon

Harvesting in the Amazon refers not only to fruits, but also to palms , even more important than fruits for indigenous life in the jungle, abundant in the lower jungle, which deserve to be treated in a special section.

More about buriti: The Tree of Life
More about the palms of the Amazon

As well as in the case of edible insects , which are consumed in almost the entire basin, to procure protein and fat in the diet.