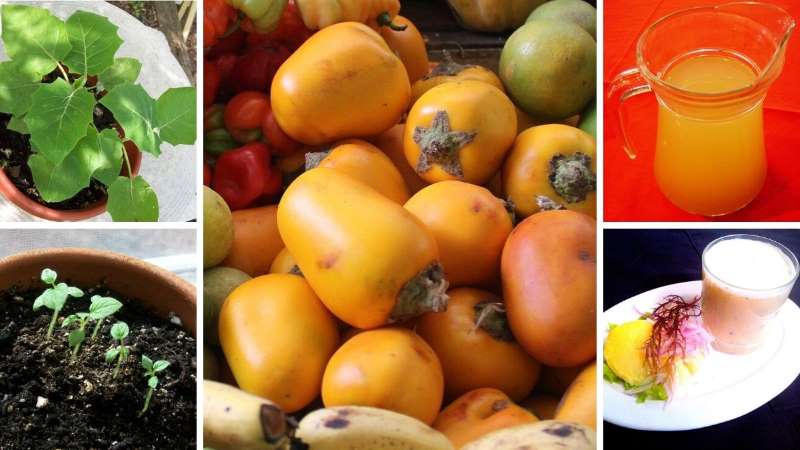 Topiro, túpiro or cocona ( Solanum sessiliflorum ) are names to refer to a small shrub and its fruit, whose surprising agronomic performance, adaptability, nutritional value, food and medicinal uses place it among the promising Amazonian fruits . However, its cultivation has some disadvantages.

Discover everything about this little giant from the hand of Dr. Rafael Cartay, a specialist on the subject.

Josep Brodsky (1940-1996), a Russian Nobel laureate poet and essayist, liked to say that life was like a jumbled album of memories. That phrase became my favorite phrase for a time in my life, when I was young. Now more, when I look old.

I remember that once, around 1999, just arrived from a study trip to the Amazon, before a large audience in a room at the Metropolitan University in Caracas, I showed, at the beginning of my speech, a túpiro , a yellow fruit like a quince, and I yelled, “Do you know what it is? Well, it is the Venezuelan Amazon . I present them to you”, and I continued joyfully speaking at the conference, to the general astonishment. I did not know the Amazon, nor the topiro or túpiro , and since that trip I fell in love with the secrets that the Amazon basin keeps. And here I am, twenty years later, writing about topiro again, asking you “Do you know what it is? As well. It’s the Amazon rainforest !”

Other names: topiro or cocona?

In the Venezuelan Amazon they call it túpiro , but inside the Amazon basin they call it something else: topiro , and also cocona (Peru, Ecuador) and cubiu (Brazil).

The Brazilian indigenous name comes from “ cubiyú ”. The name of topiro comes from the indigenous people of Alto Orinoco, in Venezuela. In English they call the fruit Orinoco apple or peach tomato . Cocona is a polysemic name, since it means, among other things, the woman’s vagina in the Peruvian Amazon and in some areas of Venezuela it is applied to the sex of little girls.

Origin and botanical description of the cocona plant

The topiro or cocona ( Solanum sessiliflorum ) is a plant of the Solanaceae family, like the tomato or the chili .

Is a shrub up to 2 m tall, probably native to the eastern slopes of the Andes mountain range and the high jungle of the Amazon, where it spread profusely, to the point that the species is distributed in all the countries that make up the Amazon basin.

Its trunk is very branched, and both the stem and the branches have soft hairs. There is a variety of cocona ( S. georgicum ) that has spines on the trunk, branches, and even on the leaves. It is a wild or wild variety, since the domesticated variety lacks spines.

The plant’s flowers appear in groups of two or more, and are 2.5 cm wide.

The fruit of the topiro

The fruit is spherical, ovoid or oval in shape, and its color is yellow or reddish when ripe.

The skin of the fruit is thin, but resistant. The yellow fruits generally present a fine whitish pubescence.

The skin of the fruit is smooth, and the pulp is yellow, firm and juicy, with an acid taste.

It is necessary to distinguish between pulp itself and the placenta, a thin layer of pulp that adheres to the skin Inside the fruit, which is a berry, there are numerous tiny, flattened, oval seeds, similar to those of a tomato, which is why they call it Amazon tomato.

Specialists speak of a wild variety, S. topiro var. georgicum, which grows in the Amazonian lowlands of Ecuador and Colombia . It is a smaller plant, with smaller fruits than the species S. sessiliflorum, and has spines on the stem, branches and leaves.

The cocona or topiro It is a herbaceous plant that grows in a wide range of altitude, which goes from 0 to 4,200 meters above sea level, in temperatures that vary between 18 and 30 ° C, in soils of medium and even low fertility, with a pH between 6.8 and 7. ,2, with good drainage.

The propagation of the plant is done by seeds. In each fruit there are between 800 and 2,000 seeds, which are planted and wait until the seedling reaches between 20 to 30 cm in height, to take it to the field and transplant it. It is planted 1.5 to 2.5 m away from the other plant, in each direction. After the first harvest , 6 to 7 months after sowing, the plant continues to produce.

Once harvested, the fresh fruit is kept for up to ten days at room temperature, which facilitates its commercialization. Some extend the storage period up to 19 days, keeping the fruit at a temperature of 15 °C and a relative humidity of 80%. Frozen pulp can be kept in good condition for up to 6 months (Ottati, Checa 2012).

The plant is very vulnerable to attack by nematodes , although some varieties have been developed in Peru that offer greater resistance to fungi.

The topiro or cocona is a relatively marginal product in the Amazon basin, despite its nutritional properties. It is produced mostly in Peru, in not very large quantities, to be sold to the industry, which makes soft drinks and jams. Small quantities are produced in Brazil , Colombia and Venezuela, although it is considered a promising fruit for export.

The largest international claimant is Canada.

The indigenous people are very fond of eating topiro or cocona. They usually eat fresh fruit, despite its acidity. The fruit is easily obtained in the Amazonian markets, mainly in Peru, Brazil and Colombia.

The pulp is used to prepare drinks and typical dishes such as: juices, soft drinks, nectars, compotes, sweets, jellies, jams, cocktails, creams, sauces. Or it is consumed, sliced or in pieces, as ingredients in salads, pickles, or as a complement in some typical Amazonian meals.

Recipes with the “Amazon tomato”

The topiro or cocona is considered the tomato of the Amazon.

Its practically daily use, and widespread throughout Iquitos , is in a hot sauce . It is commonly prepared by combining it with ají charapita, a small, spherical, yellow and very hot chili.

The sauce is called ají de cocona or cocona ucho, and is used as an accompaniment to practically all meals in the urban areas of the Peruvian Amazon, and particularly in Iquitos, capital of the Loreto region, the largest Amazonian city in Peru.

This culinary use is very widespread: they do it by mixing cocona pulp, vinegar, charapita chili, pepper and salt.

A very pleasant and refreshing combination consists of a drink made by mixing, in equal parts, the pulp of topiro and naranjilla, another nightshade that is quite similar.

Topiro is used in professional cooking to accompany fish dishes and meat stews. In popular Brazilian cuisine, the leaves of the plant are cooked to eat them.

Little research has been done on the chemical composition of topiro or cocona, as is the case with many other Amazonian products. However, it has been possible to determine that the highest concentration of flavonoids in the topiro fruit occurs mainly in the epicarp of the fruit (the skin or bark), and not in the pulp. Two cinnamic acids (p-coumaric acid and p-hydroxydihydrocoumaric acid) and a flavonone (naringenin) have been detected there. (Cardona, Juliana, Cuca, Barrera 2011).

Another investigation (Muñoz-Ordóñez 2011), which sought to obtain pectin in two cocona ecotypes, found that the main effect for pectin extraction was exerted on the bark (the epicarp) and the seeds.

Another investigation (Arapa-Puma and Cahuara-Mamani 2017) determined that topiro contained 112.5 mg of ascorbic acid equivalents/100 g, and that its antioxidant capacity increased with the blanching process, that is, submerging the fruit in water boiling for a short period of time, between 10 and 30 seconds.

Uses of cocona or topiro in popular medicine

The cocona or topiro is attributed many uses in popular medicine. The indigenous people use it as a healing agent for their wounds and to heal burns. In the urban areas of the Amazon, they recommend its use to reduce high cholesterol and blood sugar levels. Also to control excess uric acid.

The indigenous people use a topiro decoction to wash their hair and eliminate lice.