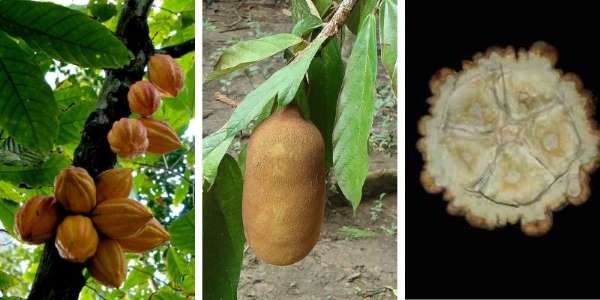 Theobroma is the most important plant genus of the Sterculiaceae family, of which 22 different species have been described, distributed in the neotropical region, specifically in the tropical rainforest (Cuatrecasas 1964; Rondón, Cumana-Campos 2005).

This distribution of the species of the genus occupies the western Amazon, passing through the Brazilian state of Maranhao, expanding to the foot of the Andes in Peru and going as far south as Mexico. The greatest concentration of species of the genus is found between Costa Rica and northeastern Colombia.

Of the 22 generally accepted species, only 12 have been the subject of scientific research, with greater or lesser intensity. Of these, 9 are native to the Amazon basin.

Apart from Theobroma cacao, the best known and most important from the economic point of view, there are four species that are considered to be good producers of edible pulp, which gives it an added value for its uses: T. grandiflorum, T. canumanense, T. subincanum and T. bicolor.

With all of them, in their areas of distribution, the population prepares chocolate beverages and uses them for medicinal purposes.

The most important species of the Theobroma genus is T. cacao. Secondary importance is given to two species considered promising for the quality of their unsaturated fats and pulp yield.

They are T. grandiflorum, known mainly as copuazú, and T. bicolor, generally called macambo or maraco.

These are small to medium-sized trees native to the tropical rainforests of South and Central America.

They are characterized by simple, alternate leaves, many of leathery texture, and fruits of different shapes: bacciform (berry-shaped or berry-like), ovoid, ellipsoidal or oblong, indehiscent, rough or tuberculate.

Almost all of them contain ellipsoidal or ovoid, smooth, brown seeds.

This section will only refer to Amazonian species considered as the most promising, apart from T. cacao, which has been commercially important mainly since the 17th century, when it was established in Spain, and from there to the European courts.

Because of its commercial importance, special attention has been devoted to it, corresponding to its great economic value on a planetary scale.

And we deal with the subject elsewhere.

Here we will describe only the species T. grandiflorum and T. bicolor, referring rather to their economic uses.

Tree that grows in humid and fertile soils, in non-flooded areas. Its height is from 8 to 20 m, with tomentose stem (with hairs that bend and mat) and grayish bark. Its leaves are leathery.

All about cupuassu (Theobroma grandiflorum) cupuassu or Amazonian white cocoa. What is cupulate or chocoazú? Why is it excellent for the skin?

Its fruit is 9 to 10 cm long, including the peduncle. Its shape is variable: bacciform, ovoid or ellipsoidal. Its fruit is indehiscent, tomentose, feruginous.

Its pulp is used to prepare juices, ice cream and chocolate drinks, which are very popular in the Brazilian Amazon, especially in Manaus and Belem. Its pulp content, with substances with antioxidant potential, is higher than that of T. cacao, making it highly valued for its culinary uses. Its seeds contain a high percentage of protein and fat, which makes it ideal for the production of white chocolate. It is the basis for the elaboration of the cupulate. The seeds contain active antioxidant substances, proanthocyanidins and flavonoids, a low percentage of theobromine, and unsaturated fatty acids, which give the butter a high quality due to its content of linoleic, oleic and stearic acids. Its peel is used as a flavoring agent.

Theobroma grandiflorum is a unique species due to its characteristics, such as its high fat and protein content in its seeds. Its pulp is more important than its seeds, unlike T. cacao. Juices, jams, jellies, yogurt, nectars and sweets are prepared from the pulp.

From the seeds, which are very bitter, a very popular drink or paste is prepared in the Amazon: cupulate.

Sun-dried seeds are used to make cupulate. Their dehydration makes them less bitter. Once dehydrated, the seeds are ground, with or without outer covering. If the outer cover is used, the product is more bitter (and is used to prepare copuazú liquor, similar to cocoa liquor).

After crushing the seeds, a dough or paste is formed, which is heated with water and sugar until it reaches the desired density. It is left to cool, and when cooled, milk is added to obtain the drink. But if molded and refrigerated, it takes the consistency of a tablet or paste, which is also commercialized.

In the Brazilian Amazon there are three large germplasm collections of T. grandiflorum.

The largest, with 29 accessions, is managed by INPA and is located near Manaus, capital of the large state of Amazonas.

The largest cultivation of T. grandiflorum is in the state of Pará, in the Brazilian Amazon.

However, there are crops in other Brazilian states such as Acre, Amazonas, Rondônia. It is currently found in the humid tropics of Colombia, Venezuela, Peru, Ecuador and Costa Rica.