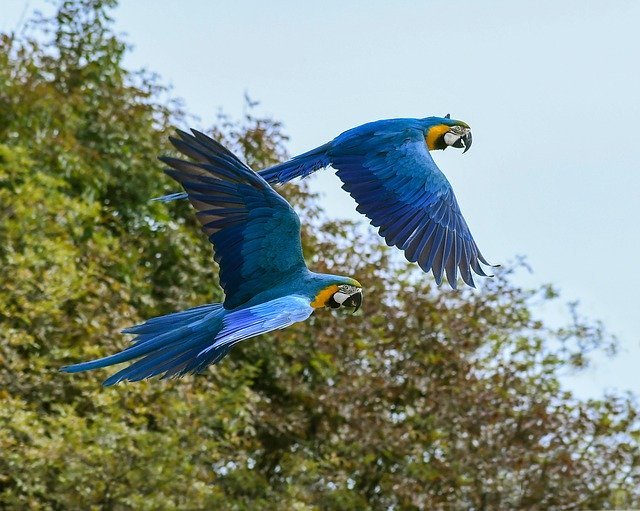 The birds of the Amazon Rainforest became well known around the world after the release of the film Rio (2011), by director Carlos Saldanha, which tells the story of a macaw or blue hyacinth raised in captivity that returns to the jungle as an adult. .

We have the idea that countless species of birds live in the jungle and we are already familiar with some of them. But how many species are there exactly? How do we compare them to global bird biodiversity?

Bird biodiversity of the Amazon Rainforest

Nowhere else in the world are there as many species of birds as in the Amazon rainforest .

This was stated by the Swiss-American ornithologist Rodolphe Meyer de Schauensee in “A guide to the birds of South America “ first published in 1970.
This assertion was confirmed years later by Dean Arthur Amadon, another North American bird specialist, in a comparative study between the birds of the African forest of the Congo and the birds of the Amazon Rainforest (Amadon, 1973).

In a “rapid evaluation” of just 3 weeks in the Yaigojé-Apaporis Indigenous Reserve in Colombia , the researcher from the Department of Biological Sciences of UNIANDES Enrique Avendaño recorded in 2009 “225 species of birds from 58 families”.

In Limoncocha, Orellana province, Ecuador , more than 460 species of birds have been recorded.

The Avibase web portal, for its part, shows the figure of 1,295 bird species for the Colombian Amazon region . This virtual database is taken into account by formal research works at an international level.

On the other hand, in field work carried out over 7 years in the Jaú National Park in the Brazilian Amazon , at least 445 species of birds were verified. According to the researchers, this figure represents “more than 50% of the known avifauna of the central Amazon.” (Borges, 2001)

In summary and taking into account other sources, the total number of birds in the Amazon is around 1,300 species, of which at least 566 species and 612 subspecies are endemic or native (Oliveira, 2017).

Some species of birds in the Amazon see their area of action limited by the barriers formed by the main tributary rivers of the basin , while others are more or less homogeneously distributed throughout the length and breadth of the Amazon. The models proposed to define the habitat of Amazonian avifauna are still hypothetical and inconsistent.

The following is a small sample of some typical birds of the Amazon.

Amazon birds of prey or raptors

This group of birds has sharp beaks and strong legs, with large claws, with which they hunt their prey. There are diurnal and nocturnal birds of prey.

The Harpy Eagle (Harpia harpyja) is a large and corpulent bird of prey, it has a very prominent black crest on its head, which it can raise at will. Its head and neck are gray, its chest and belly are white and light gray. It feeds on small mammals that live in trees, it also feeds on birds.

Among the birds of prey that live in the Amazon Rainforest there is the Black Owl (Ciccaba huhula). This is a bird of nocturnal habits, it is black marbled with white, its beak and legs are orange. It feeds on rodents , bats, and moths.

The Spectacled Owl , (Pulsatrix perspicillata) , is a nocturnal bird of prey. It has white feathers around the eyes that seem as a pair of glasses.

Hummingbirds or kindes and other little birds.

The topaz hummingbird , (Topaza pella) is a colorful little bird that has a couple of long feathers that protrude 10 cm. of his tail. The males are purplish red in areas such as the chest and back, with a yellow throat; females are very similar, but dull in color.

One of the most striking birds of the Amazon jungle is the Emerald Chiribiquete (Chlorostilbon olivaresi), it is a bird of the hummingbird family, which has a short beak and generally its plumage is bright green, although it can also be purple or blue.

Another of the small birds that can be seen near the Amazon River is the Castelnau Batará (Thamnophilus Cryptoleucus) , the male has black plumage with white lines while the females are completely black.

There is also the Red or Black-banded Woodcreeper or Tango Woodcreeper ( Dendrocolaptes picumnus ) , a type of woodpecker that measures between 25 and 28 centimeters, with brown plumage on the wings, back and head, while the chest has a yellowish or beige color.

The Psittaciformes are an order of birds that includes approximately 86 genera with 372 species that are found mainly in the tropics and subtropics.

The Yellow-faced Parrot (Alipiopsitta xanthops) has a completely yellow face. As time goes by, a kind of red chest band is created.

They usually live in wooded areas where they can take refuge, they always move in pairs or in small groups and their main food is seeds and fruits. It is characterized by its ability to learn words and sounds, so it is very common to see it in rural houses as a pet.

The Macaw (Ara) is a bird of the Psittaciformes order and the Psittacidae family, very striking for the color of its plumage. It is one of the largest neotropical parrot species in the American continent and on the planet.

There are several species of macaws such as the Blue Macaw or Hyacinth Macaw, (Anodorhynchus Hyacinthinus), one of the most beautiful in the Amazon due to its intense blue color, which covers the entire body. Its eyes and chin have an intense yellow hue that contrasts with the plumage.

Gallinaceae are those animals with short beaks and robust legs, with small wings and nails prepared for digging. In the Amazon region we can find several types such as the Gallina de monte , they are compact in shape, without a very visible tail, and with somewhat short legs.

They are also terrestrial, surly and shy, they inhabit the jungles and it is usually easier to hear them than to see them. They eat insects , seeds and fruits , and their song consists of very melodious flute-like whistles.

Also within the gallinaceous birds is the Camungo (Anhima cornuta) which can measure up to about 90 cm in height, with white and brown plumage, with a kind of horn on its forehead.

Anseriforms have flattened beaks and webbed toes that allow them to swim on water. To this group belong the duck, the goose, the goose and the swan.

In the Amazon you can find the Orinoco Goose, also called Jungle Goose (Neochen jabata) , a bird with a long neck and legs, and a small beak. Greyish white plumage, and black wings and tail.

This goose lives in the tropical and subtropical regions of the Amazon. Very frequently it can be seen in the wooded areas of the Orinoco River and its tributaries.

We can also mention the fulvous whistling duck (Dendrocygna bicolor) a bird that can measure up to 50 centimeters. The upper part of its head is dark reddish brown, with a line of the same color running down the back of the neck to the back.

The rest of the body is lighter reddish brown. Its wings and tail are dark brown. It feeds on insects and seeds.

Another species of this type is the Huangana (Anas monogama). A wild duck with picturesque plumage that has various colors. It is white on the neck and tail, its belly, back and legs are red, its wings are green and its beak is black.

Among the carrion birds, the buzzards or vultures are well known, but in the Amazon Rainforest there is a relative of these corpse-eaters that stands out for its beauty and color, it is the majestic king vulture ( Sarcoramphus papa ).

They also call it the jungle condor, royal condor or King Zamuro. With its 67 to 81 cm in height, and 3.4 kg in weight, it is in third place among the largest birds in the American continent.

His body is black and white, while his head has red, yellow, black and purple spots.

Learn more about the birds of the jungle