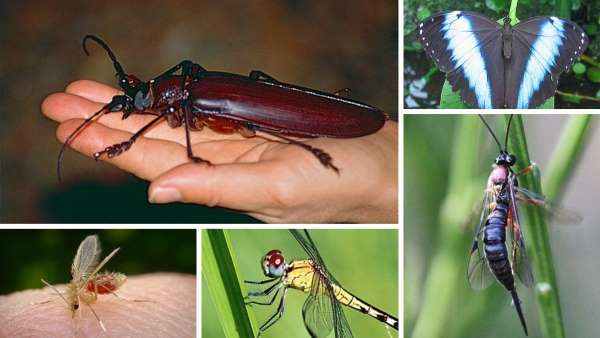 The insects of the Amazon (Hymenoptera, Diptera, Odonata, Lepidoptera and Coleoptera) are often considered demonic creatures, harmful to humans, synonymous with disease and pests, yet many species are fundamental to the environmental balance while others have unsuspected food potential.

So far, about 60,000 species of insects have been recorded in the Amazon, a rather low number compared to the million species of insects recorded worldwide. Even more so when we are talking about a region characterized by the megadiversity of its fauna, the most biodiverse on the planet in almost all animal and plant kingdoms.

Insects represent the most evolutionarily successful animal group (Guzmán-Mendoza, et al, 2016). They also constitute the largest animal biomass on the planet (Aragón, 2005), with a volume greater than that of all other animals combined (Ramos-Elourdoy and Viejo, 2007: 67-68).

How are the insects of the Amazon Rainforest classified?

The insects of the Amazon region, like all insects, can be classified as follows:

The group of Hymenoptera includes such common animals as ants, bees and wasps, which undergo complete metamorphosis.

In the Amazon rainforest there is a great variety of ants, many of which are consumed by the indigenous peoples of the region.

Among these we find the Atta genus, such as the Curuhuinsi, Hormiga Culona (Atta spp.), a large brown ant, as well as the small-headed lemon ant, which has a lemon-like taste.

We can also mention the Bullet Ant (Paraponera clavata) considered the largest ant in the world, which has a potent venom that it injects through its mandibles.

The Amazon is also home to other types of hymenopterans such as the honey bee (Apis mellifera) . Most of the bees that live in the Peruvian Amazon are meliponas (stingless), which produce little honey and build their honeycombs horizontally.

There is also the Abeja (Allpa Mishqui), a native bee that produces honey and makes its nest in the ground. And the Arambasa (Trigona amazonensis) a black bee that produces a different honey, slightly acidic and more liquid.

One of the most recent findings in the Amazon Rainforest is the giant stinger wasp (Clistopyga crassicaudata). This wasp seeks out those spiders living in nests and paralyzes them with a quick injection of venom.

2. Diptera: mosquitoes and their dangerous diseases

Flies, mosquitoes, gnats and midges are part of the Diptera, a relatively small and species-rich group of insects.

The Anopheles mosquito (Anopheles darlingi) is a mosquito of the Culicidae family. This species is the main transmitter of malaria in the Amazon region. The female is the blood feeder, while the male consumes nectars from flowers and plants.

The common mosquito (Culex nigripalpus) is medium-sized and dark brown in color with metallic bronze to blue and green spots on the abdomen and legs. It is the cause of several diseases, such as equine encephalitis.

In addition, there is the Manta blanca (Lutzomyia amazonensis) is a very small mosquito, one to 2 millimeters in length, which has many hairs on its body and V-shaped wings. It is responsible for the transmission of malaria and Leishmaniasis in many areas of the Amazon.

Odonates are dragonflies and damselflies. They differ from most insects in that they cannot fold their wings over their abdomen. They are considered more primitive and have incomplete metamorphosis.

The dragonfly or Chiinchilejo (Pantala flavescens) can grow up to 6 centimeters long. This dragonfly is yellowish brown, with small black spots on its tail. Its hind wings are wider than the forewings. And it feeds on small insects that it catches while flying, usually mosquitoes.

Another insect of the Amazon is the Banded Dragonfly or Banded Chinchilejo (Erythrodiplax umbrata) has a length of up to 5 cm. Adults are bluish-green, with two pairs of vertical brown bands on their wings, and darken as they get older.

4. Lepidoptera: butterflies in the Amazon Rainforest

Lepidoptera are an order of holometabolous, mostly flying insects, commonly known as butterflies.

The Morpho Butterfly (Morpho achilles) is one of the most striking butterflies of the Amazon Rainforest, it is of medium size, the males are characterized by a dark color with an iridescent light blue stripe on each of its wings and white dots at the ends of each of them.

There is also the Papilio butterfly (Papilio thoas) , a small black butterfly whose wings can measure up to 12.8 centimeters. It has a row of yellow spots along its wings and the lower end of the wings also has small yellow spots.

Additionally in the south american jungle we can find the Phoebe Butterfly (Phoebis trite) which is bright yellow, with small orange stripes on the top of its wings. It is common to see them fluttering in groups on the banks of rivers throughout the Amazon.

Coleoptera are invertebrate animals, which form an order integrated in the animal kingdom with the greatest diversity. And within this group is the elephant beetle or Papazo (Megasoma actaeon).

Giant beetles can grow to more than 13 cm and weigh up to 80 grams. These Amazonian insects are characterized by their shiny black color and feed on flowers, leaves and droppings.

There is also the Papazo, titan beetle (Titanius giganteus), which is larger than the previous one, reaching 16 cm in length and 100 grams in weight. Its head and legs are bluish with whitish spots.

Another specimen of the beetles are the fireflies, many believe that they belong to the group of worms, but these are beetles, and in the Amazon Basin inhabits the firefly (Photinus pyralis) very common in the jungle, is characterized by having two dark colored antennae with white bands.

Insects form an important part of the diet of many Amazonian peoples, they constitute an unequaled protein contribution. Their collection and proto-cultivation is a complementary activity to hunting and fishing, often carried out by women and children.

The consumption of the larvae of Rhynchophorus palmarum and Rhinostomus barbirothis beetles, and Hymenoptera, including ants, termites, wasps and bees, with the consumption of Atta cephalotes and A. sexdens ants standing out.

Importance of the Amazon Rainforest Insects

Insects have attracted the attention of mankind since ancient times for their negative and positive effects.

Here we have two large groups:

You may also be interested in: spiders of the Amazon Rainforest