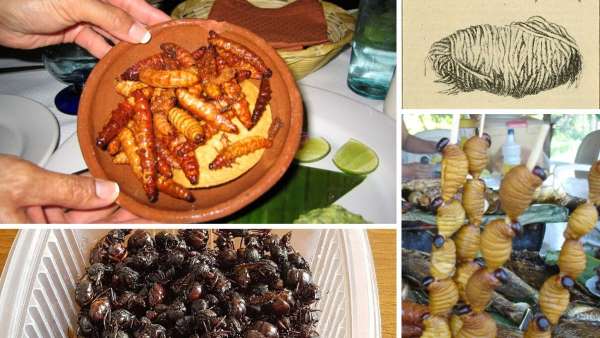 Insects are an excellent food alternative in a world with a growing human population with serious problems in accessing enough quality food.

Among the advantages of consuming insects we have:

Edible insects in the Amazon

In the Amazon there are about 135 species of edible insects , which represent more or less 0.23 percent of the total insect species in the region, estimated at about 60,000.

On the other hand, while in the whole world the most consumed insects are crickets, grasshoppers and grasshopper lobsters, in the Amazon the preferred ones are the larvae of the beetles Rhynchophorus palmarum and Rhinostomus barbirothis (Paoletti, et al, 2001; Araujo et al , 2007; Dufour, 1987), and hymenoptera, including ants, termites, wasps and bees, with consumption of Atta cephalotes and A. sexdens ants standing out.

This second group has preference among the peoples of the Brazilian and Colombian Amazon , where some indigenous groups live, such as the Andoque in the middle part of the Caquetá River, who are notable consumers of parasol ants, of the genus Atta (Jara, 1966).

Level of insect consumption in the Amazon

Taking into account the level of fidelity of the consumption of insects in the Amazon basin, that is, the frequency of their use, it is observed that only 30 species of insects are consumed frequently, highlighting, among them, the consumption of Rhynchophorus palmarum in the South American tropics.

Paoletti et al (2000) reported a consumption of 6 kg/year/ per capita of Rhynchophorus palmarum larvae, also known as suri . As each fresh larva weighs between 8 to 12 g, it would imply the consumption of 50 larvae per person per month, which is possible.

Ramos-Elourdoy et al (2007) point out that the Yanomami indigenous group consumes more than that, in addition to other insects (ants, wasps and other larvae) and spiders, which are not strictly speaking an insect (Posey, 1976).

Beckerman (1977) reported similar consumption among the Bari of Venezuela.

In summary, it can be concluded at this point that, despite the fact that a great variety of insects are not consumed in the Amazon basin, there is a high consumption of some species, such as the Rhynchophorus palmarum , which is listed as a dietary supplement in many indigenous Amazonian native communities (Sánchez, Jaffé and Hevis, 1997), along with its medicinal uses (Myers, 1983).

It is interesting to note that in urban areas of many Amazonian regions, edible insects are freely sold. In the Iquitos markets, suri is sold in different presentations: live, cooked and roasted.

Some researchers raised several decades ago the need to value the consumption of insects as an excellent food resource, widely used among indigenous Amazonians, among rural Mexicans and in many Asian and African cultures.

These authors (Ratcliffe, 1990; Smith, 1996) considered that protein malnutrition among indigenous groups in the Amazon was relatively low in the area due to their high consumption of insects, mushrooms, stone chips, and almonds.

This opinion, perhaps a little exaggerated, can be sustained with some reservations.

The riverside indigenous meet their protein needs basically with the consumption of fish.

Some riverside groups present an average per capita consumption of 20 to 50 kg/p/year, although some communities reach consumption close to 200 kg/p/year.

Under these conditions, the consumption of insects plays a secondary role, as a supplement to the diet, not essential but necessary to complement it.

I don’t eat insects, but they taste divine!

Many times, indigenous youth do not recognize this consumption in the food consumption surveys that are applied to them.

The indigenous people in the most advanced process of cultural assimilation do not declare this consumption, because they have learned in the cities that this consumption is unpleasant and dirty, although they tend to practice it in secret (Ruddle, 1973).

This concealment does not occur with indigenous groups that are proud of their ethnic identity and boast of such a food practice.

Although not openly declared, the consumption of insects is common throughout the Amazon basin. That is evident if one pays a visit to any indigenous community during the rainy season.

In some native communities of the Loreto region, in the Peruvian Amazon , I directly recorded the consumption of nine species of insects belonging to several orders, although the most consumed was the Rp, in close correspondence with the wide geographical distribution and the abundance of some host plants such as Mauritia flexuosa , aguaje, then in the low jungle there are huge stands of this palm that are known as aguajales (Cartay, 2016:160).

Some recipes with suri

The indigenous people consume the larvae fresh, alive or dead, roasted or fried. In the urban areas of the Amazon, they are served fried in their own fat, or roasted over direct heat.

This form of preparation and consumption constitutes an imitation of the indigenous way.

The most sophisticated urban chefs offer their product in a salad, or wrapped in the manner of a tequeño, or threading the larvae on a skewer as if it were a skewer or Turkish kebab.

This is what happens in the restaurants of Iquitos, in Peru, or Puyo, in Ecuador , or Leticia , in Colombia, or Puerto Ayacucho, in Venezuela .

Other cooks have incorporated the larva in some typical preparations of regional cuisine, from the Peruvian Amazon.

Thus, we have the juane de chonta (palmito), which mixes palmita, a tender edible inflorescence of some Amazonian palms, with suris or palm worms (Chirif, 2016).

Brewer-Carias (2013: 150) recommends cutting the end of the larva before consuming it raw, to reduce its pungent taste, probably caused by its digestive juices. This is how the Yanomamo come from, from the border of the Amazon between Brazil and Venezuela: they bite the larva behind the crooked head, and remove the intestines and the head, with their teeth (Chagnon, 1968).

Depending on the season, empty or rising rivers, which changes the availability of food in the jungle , because it alters the products of the hunting and fishing , resorting to harvesting , an activity that encompasses wild fruits , drupes of palm trees , mushrooms, molluscs, small land animals like amphibians , and edible insects.

The consumption of these insects is very important during certain times of the year. Paoletti et al (2000) and Paoletti, Buscado, Dufour (2005) based on studies by Ramos-Elourdoy et al (2007), and using various sources, record much higher consumption among the Yanomami, an indigenous group that lives on the Venezuela border. -Brazil.

The nutritional value of edible insects is sufficiently proven by numerous laboratory studies.

Content protein of edible insects varies between 30 to 40%: from 30% for the wood larva to 80% in the wasp Polybia sp. (Krajick, 1994), which equals, and even exceeds, the values obtained for the different types of meat, which range between 40 and 75%.

In the specific case of the Rp larva, the protein content is 76%, clearly higher than that of beef, which is 50 to 57%.

Something similar occurs with the fat content that, in meats, ranges from 17% in fish to 19% in beef. In the case of the Rp coleopteran larva, this value ranges between 21 and 54%, also presenting a better composition.

Animal protein is important for its high biological value, which depends on its content in number and variety of essential amino acids, and its digestibility or ease of assimilation by the human body.

The biological value of protein corresponds to the proportion of protein absorbed and used by the body.

For it to be used efficiently, it is necessary to have all the essential amino acids in the right proportions. That happens with foods of animal origin: milk and meat.

The protein of edible insects is also of high biological value, like that of meat, with a triple advantage over them: it has a lower relative price, it is easier to digest and it is healthier because it does not contain cholesterol (Sutton, 1998 ).

However, its greatest importance for the conservation of the environment lies in the fact that it has a better index of efficiency of conversion of food into biomass.

The value of an animal as a source of nutrients depends mainly on its nutritional contribution and the efficiency with which this animal converts the consumed food into biomass (Ramos-Elourdoy, 1984; Krajick, 1994).

In this aspect, the animal that gains more own weight for each gram of food consumed is more efficient.

For chicken, the most efficient among meat products, 6 kg are required.

In contrast, for insects only 2 kg are needed, showing a high rate of conversion efficiency. For Costa-Neto (2003) and Krajick (1994), insects are more efficient in relative terms than other animals, because they are invertebrate, cold-blooded animals.

Their disadvantage is that their consumption is seasonal and their production is insignificant in terms of volume to supply the potential market.

This situation can be reversed, since its cultivation is beginning on a large scale in some countries of the world, such as Thailand, Mexico and Spain.

Members of native indigenous communities, for example, in the Peruvian Amazon, collect, in a kind of protoculture, some insects that they eat to supplement their diet, particularly as a source of protein and fat.

They then consume beetle larvae, especially Rynchophorus palmarum, as well as cicadas, ants, grasshoppers or crickets, butterfly larvae and other caterpillars.

Of all these insects, the most consumed in the entire Amazon basin, and the most investigated relatively by science, is Rynchophorus palmarum, known by the common names of suri, chontacuro, gualpa, palm worm, palm weevil, mojomoy , torito, amuntal, papazo, motto and many more names.

Costa-Neto and Ramos-Elourdoy (2006: 430) point out that the collection of edible insects depends on four factors: food restrictions and taboos , traditional customs, personal taste or the taste preference of the group, and the search for food security. to guarantee survival.

Another factor could be added: seasonality, because in the rainy season the insect infestation process accelerates.

These authors also maintain, together with Miller (1997), that the use of an insect as food is related to four variables: the environment, the availability and accessibility of insects, the mode of production and the forms of reproduction of the insect. culture and food restrictions.

In several native communities, the collection and cultivation of insects corresponds to indigenous women and children, and they proceed with a festive spirit to fulfill this task, even in times of abundance of hunting and fishing products.

How to achieve a food paradigm shift?

It is necessary to prepare didactic manuals to develop popular undertakings related to the “cultivation” of edible insects.

Kitchen specialists must write recipe books that inform about novel ways to facilitate the consumption of insects, overcoming the reservations that people have to consume them.

Only entomology, ethnozoology and applied anthropology have dealt with the subject, but not nutritionists, for whom it should be an important concern.

Theirs is the difficult task of developing efficient campaigns, and attractive from the point of view of “taste”, to use the consumption of insects, of high nutritional value, as an effective instrument in reducing the serious problems of chronic malnutrition that A large part of the child population of the world’s poor countries suffers, configuring a situation of food insecurity that impacts the political, socioeconomic and health aspects of these countries.