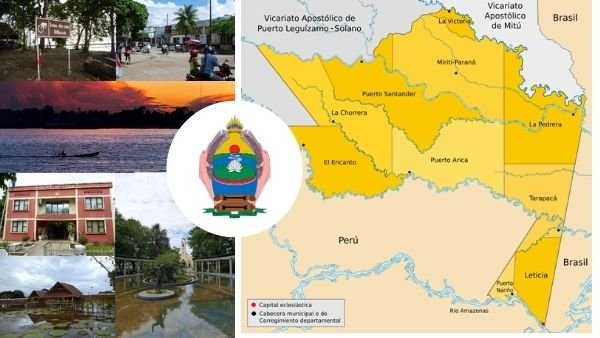 Leticia is the capital of the department of Amazonas, Colombia, located on the banks of the Amazon River, on the shared border with Brazil and Peru, with an area of 5,832 km2 and 32,450 inhabitants (Municipalities of Colombia, 2020). Its status as a border city gives it special characteristics and intense trade, especially with Brazil.

It was founded with the name of San Antonio by the Peruvian Governor Benigno Bustamante in 1867, as a customs post to control the transit of rubber, merchandise and people.

Previous colonization attempts that promoted European immigration since 1850 did not advance; however, the rubberindustry was developed (1879 -1912), with the Peruvian Amazon Company, the indigenousbeing subjected as slaves to work in this activity (Ávila Sánchez, 2027).

In 1922 this town changed its name to Leticia, with the signing of the Salomón-Lozano treaty that delimited the borders between Peru and Colombia, becoming Colombian territory in 1930, but the following year the Peruvian government denied the agreement and in 1932 it was occupied. by insurgents.

Leticia was returned to Colombia in 1933, when Peru agreed to end the confrontation and the military work of the two armies was paralyzed; In short, the end of the diplomatic conflict was reached in 1934 with the signing in Rio de Janeiro of the Peace, Friendship and Cooperation Protocol (Arteaga Montes, 2017).

According to Aponte Motta (2017), Leticia has gone from a “nationalist narrative” to an “environmental-adventurous narrative”, in the context of the global perspective and ecological concern during the last decades. The “national monument”, the patriotism and the military successes of the border disputes with Peru in the 1930s, were giving way to the encounter with nature.

Tourist attractions in the region

In this region is the Santander park; the Uirapuru museum; the Amazon World Ecological Park; the Island of the Monkeys; the Victoria Regia tourist center, the Ethnographic Museum “El Hombre Amazonico”, among others. Various activities are carried out such as ecological walks, visits to the botanical gardens, interactive cultural scenarios, sports such as canopy and kayaking, among others.

In addition, Leticia has many rivers and lagoons, one of the interesting activities being sailing down the Amazon River, observing the landscape and the birds, the pink dolphins and lizards; There are also canoe rides in the Flor de Loto Natural Reserve, enjoying its native fauna and flora (Balanta, 2019).

Shield of the Municipality of Leticia