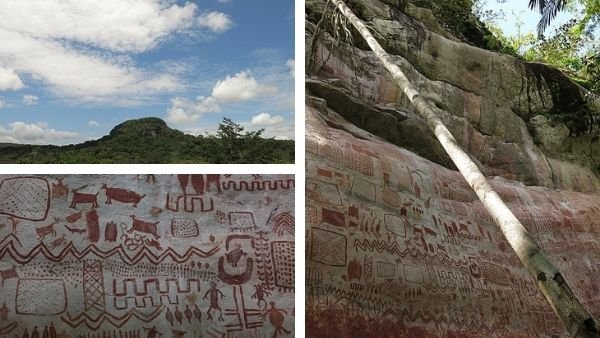 In the transition of the landscape of the Amazon and the Orinoquia, related to the Guayanés Massif, is the Serranía de la Lindosa, which constitutes a chain of sedimentary rock formations, which is located in the Colombian Department of Guaviare, neighboring the department of the Meta.

There, in that great extension of the Serranía, is theChiribiquete National Park, declared a World Heritage Site on July 14, 2018.

In the vicinity of Cerro Azul there are avenues of rocks up to 12 km long.

What paintings are there in the Chiribiquete?

Hunting scenes and figures of indigenous characters who hunt, dance and perform group ceremonies are engraved on the rocky walls.

There are also large animals drawn, such as the mastodon, which was lacking in archaeological records in South America for about 8,000 years.

There are also giant sloths, paleolama and many painted jaguars, which speaks of a regional cult of the jaguarsince ancient times.

The archaeological site is located in the vicinity, about 17 kilometers, from San José del Guaviare, capital of the department, which has negatively influenced the preservation of the treasure that the place contains.

In addition, open-pit quarrying is carried out in the area, and extensive cattle ranching is developed, which brings with it increasing deforestationand forest fires. These conditions have produced a great vulnerability, which threatens its conservation.

The site, however, houses some special areas, some 893 hectares, out of a total of 12,000 hectares, in which thousands of cave paintings have been recorded whose age ranges from 13,000 to 8,000 years, which are estimated to correspond between the end the Pleistocene and the transition to the Early Holocene.

A unique treasure of rock art in the Colombian Amazon

The richness of the site, considered one of the concentrations of cave paintings in America, speaks of the arrival and adaptation of migrant populations to the Amazon in remote times and forms of civilization that were unknown in the Amazon region until about twenty years ago. years, which were discovered by Colombian scientists by a simple accident.