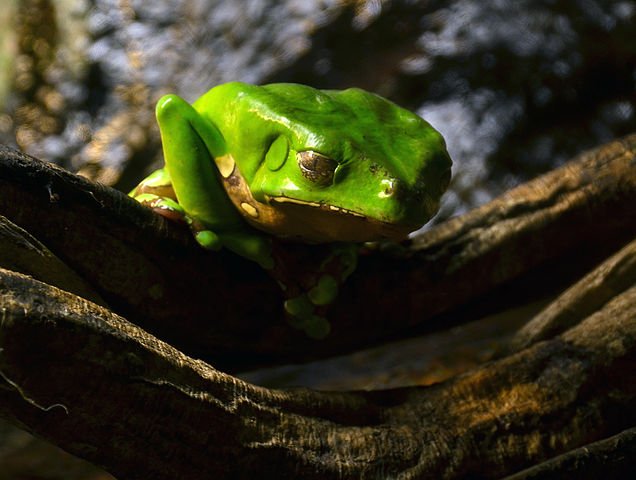 A tree frog known as kambo (Phyllomedusa bicolor) or Giant Monkey that inhabits the Amazon (mainly between Colombia, Ecuador, Peru and Brazil) is traditionally used by some tribes, among which the Katukina, the Yawanahuá and the Cashinahuá have been mentioned.

It is used not only as a remedy against bad luck and as “hunting magic” but also as:

“…a powerful medicine against snakebite, malaria, yellow fever and other epidemic diseases.”

Indigenous use of kambo

The indigenous people scrape the skin of the live frog and apply it to self-inflicted burn wounds on the arms during rituals.

The first reaction is a very strong purge from which, after recovering, those who submit to this poison feel reinvigorated.

Some of the diseases that it is believed could be treated thanks to its bioactive peptides are:

Peptides with similar anti-tumor properties are also found in another venomous anuran from the region. This is the case of the cane toad, the giant toad or rhinella marina species that invaded Australia under unusual circumstances.

On the other hand, the use of kambo has become popular in Brazilian cities as “scientific medicine” and as “medicine of the soul” among the ayahuasca religions, who consider the substances secreted by these frogs as equivalent to the substances of a master plant such as the “kambo”. ayahuasca but from the animal kingdom. (Labate, 2015)

In addition, these shamanic rituals with kambo have even reached Europe, according to information provided by a research work. (Agüero-Gonzales 2019) according to which a 30-year-old woman “suffered rapid and symptomatic severe hyponatremia” following her participation in a kambo purging ritual in Spain.

Labate, B. C., & de Lima, E. C. Medicament or Shamanic Substance of Power: The Use of Kambô in Brazil. PDF