Do you want to know the largest tropical rainforest in the world? Discover here everything you need to know to enjoy a part of this wonder of nature, get to know with us the most representative tourist attractions of the Bolivian Amazon Rainforest.

The Bolivian Amazon is currently one of the most visited tourist destinations in the region, thanks to the fact that it offers a great variety of inexpensive tours compared to other areas in the region.

In addition, it is tempting to visit some destinations such as the Pampas de Yacuma, the Chalalán Ecological Lodge and a tourist jewel such as the town of Rurrenabaque.

The Bolivian Amazon has 824 thousand kilometers of territory and is distributed in 6 departments: Beni, Pando, Santa Cruz, La Paz and Cochabamba.

1. Rurrenabaque: entrance to the Amazon jungle

Rurrenabaque is a small town in northern Bolivia, located in the department of Beni and the gateway to the fascinating world of the jungle. The tropical city is located on the banks of the Beni River.

Rurrenabaque is simply called “Rurre”. It is a town with a tropical climate, famous for being the starting point of several excursions that allow you to get to know the flora and fauna of the region.

Also, the city has numerous hotels and travel agencies that offer packages with a variety of prices for visitors to know the benefits of this town and the Amazon in general. 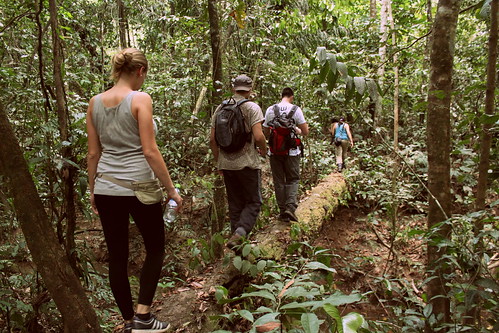 However, in Rurrenabaque it is necessary to take an organized tour to be able to go to the most remote places where it is possible to observe the spectacle of nature. Among the excursions, two destinations stand out: Selva and Pampas.

In the jungle you can admire all the exuberance of the tropical forest, its landscapes, vegetation and biodiversity. While in the Pampas, the main attraction is the observation of wild animals.

Las Pampas are located in the ecosystem of the Yacuma River, a few kilometers from the town of Santa Rosa del Yacuma and three hours from Rurrenabaque.

On the walk you can observe caimans, turtles, capybaras, monkeys, deer, tapirs, rheas, snakes and a great variety of birds and butterflies. Also while navigating the river you can see pink dolphins and experience piranha fishing.

The Madidi National Park jungle has a total area of 18958 square kilometers and an altitudinal range that goes from 5760m in the glacial peaks of the Andes to the Amazon plain located at 180 meters above sea level.

Madidi National Park is now being heavily promoted for ecotourism and environmental education. A 6-hour boat ride from Rurrenabaque transports tourists to the national park.

Locals in the region operate boats, eco-lodges and other tourist facilities in the area to assist tourists throughout their trip.

Given that Madidi National Park has extremely dense forests, dangerous predators and toxic species, it is recommended that tourists do not go out into these forests alone but rather tour the park with authorized guides or as part of organized tours. The best season to visit the park is between October and April. 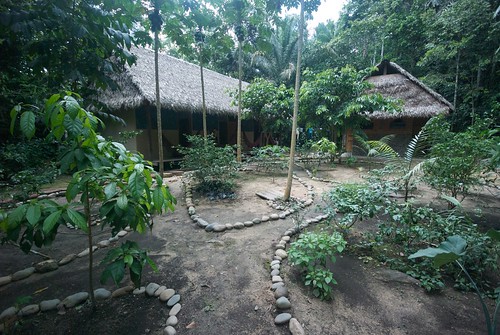 Chalalán is an ecological lodge of the indigenous people of San José de Uchupiamonas dedicated to ethnic ecotourism. It is located in the Madidi National Park in Bolivia. Its cabins are located in the surroundings of Lake Chalalán, on the southern bank of the Tuichi River, about 100 km southwest of Rurrenabaque.

Chalalán is one of the most successful cases of community and indigenous eco-tourism in the world, and has been nominated by National Geographic magazine as one of the top eighty tourist destinations on the planet.

The ecolodge belongs to the Uchupiamonas indigenous people, and the community that brings them together is located in the Territorio Indígena Campesino Originario (TIOC) called San José de Uchupiamonas.

Cochabamba is one of the nine departments that make up the Plurinational State of Bolivia, being the third department in economic importance in Bolivia. Its capital is the homonymous Cochabamba.

It is located in the center of the country, bordering Beni to the north, Santa Cruz to the east, Chuquisaca and Potosí to the south, Oruro to the southwest and La Paz to the west.

Among the tourist attractions of Cochabamba are:

Located in the Chapare Amazon basin, it is a paradise for explorers and adventurers who practice extreme sports such as rafting, canopy, rappel, paragliding and others. Within its surface you can appreciate landscapes of great beauty. It is located next to Amboró National Park and together they form an environmental conservation unit.

This national park is a wildlife reserve of great importance. There you can find several typical Amazonian felines such as the puma and the ocelot.

You can also find the spectacled bear, Frontino bear or Andean bear in this park because the park is located between the Andes and the Amazon jungle. The natives also call this bear in Quechua: jukumari, ukumari or ukuku.

It is a colossal statue located in the city of Cochabamba, Bolivia, which since 1987 is part of the tourist attraction of the city. The image is considered the largest statue of Jesus in the world. Given its dimensions, the image is visible from practically any point in the city.

It is located in the center of the department and north of the city of Cochabamba. The area protects a sector of the Tunari mountain range, one of its main attractions being the peak of the same name, which has an altitude of 5,020 meters.

Isiboro-Securé National Park is located northwest of the Cochabamba department and south of the Beni department. The area protects biological diversity – with more than 600 birds –, the headwaters of river basins and the indigenous populations of the TIPNIS.

La Paz is one of the nine departments that make up the Plurinational State of Bolivia. Its capital is Nuestra Señora de La Paz, seat of the Central Government and the Legislative Branch, which is located at an altitude of 3640 meters above sea level.

It is located in the west of the country, bordering Pando to the north, Beni and Cochabamba to the east, Oruro to the south, Chile to the southwest and Peru and Lake Titicaca to the west.

Some of the places of interest in La Paz are the valleys and plains in the north as well as Los Yungas, the coca and coffee growing region par excellence with its main towns of Chulumani, Coroico and Caranavi.

La Paz is Bolivia’s most biodiverse department and also has the Madidi National Park in the northern jungle. Other attractions are its current five cable car lines that pass over the top of the city.

Road of the Yungas or “Road of Death”.

One of the biggest attractions is the so-called “Camino a los Yungas” or “Camino de la muerte” that descends from the summit to the city of Coroico in the middle of the Bolivian high jungle. The attraction is famous for the danger and unsurpassed views that tourists see when cycling down this ancient road.