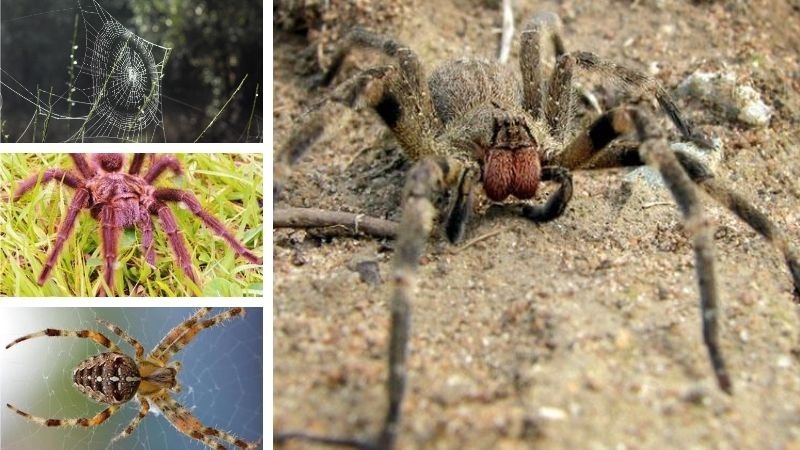 Amazonian spiders belong to one of the eleven orders of the class Arachnida, the most diverse, of the order Araneae, one of the most widely distributed groups of arthropods, which is distantly related to insects.

For this reason spiders should not be confused with insects .

They comprise a wide spectrum made up of some 110 families and more than 46,500 species.

Everyone knows what spiders are like, that they often instill fear and phobia in us (arachnophobia), and that many specialists, grouped in the arachnology discipline, argue about whether it is innate or a learned behavior.

But few know that spiders are not insects, and they are often mistaken for them.

Spiders live in all existing ecosystems, except those in the open sea, due to their ease of colonization and dispersal.

Specialists consider that spiders have existed on Earth for more than 350 million years, since the Carboniferous period (Ferretti et al 2011).

Most spiders are solitary predators of small animals , such as insects . Most are poisonous, except those of the uloboridae family.

But not all of them are dangerous, nor do their bites have deadly effects on humans.

And strictly speaking, very few, although there are antidotes to avoid it. They secrete and store the poison in their glands, which are found in the chelicerae. With that poison they paralyze their victims.

There is not much research on Amazon spiders, and there are no complete inventories of the species by Amazon region.

Although certain efforts have been made (EcoRegistros Ecológicos 2020), much remains to be done. There are magnificent studies (Avilés et al 2001).

And numerous species of spiders are known to exist, some exhibiting social behaviors, belonging to at least seven different families.

One of the most important species, due to its size and because it is consumed by various Amazonian indigenous groups , especially in Venezuela, is the Theraphosa blondi, known locally as the spider monkey , and elsewhere as the Goliath tarantula.

The body of spiders is made up of two segments or tagmata: the cephalothorax or prosoma, and the abdomen or opisthosoma.

All spiders have a pair of chelicerae, a pair of pedipalps, and four pairs of locomotive legs.

The chelicerae, located immediately before the mouth, preoral, are pointed mouthparts that guard the poisonous glands and serve to grab food.

The pedipalps are like legs, but they do not rest on the ground, standing up at the front. The pedipalps act as tactile organs, as they lack antennae.

With the pedipalps the courtship of the female spider is produced and it acts as a copulatory apparatus.

The entire body of the spider, according to its enormous variety of species, measures between 0.5 mm to 9 cm, but with its legs extended it can reach up to 25 cm, and even more, as happens with the species Theraphosa blondi, which goes by various names, such as the Goliath tarantula or cute spider , and is considered the largest, or at least one of the largest spiders in the world.

Spiders have a circulatory system, with a tiny tubular dorsal heart located in the abdomen or opisthosoma.

Your heart beats, 30 to 100 times a minute, circulating hemolymph by pumping it from a pericardial cavity.

Spiders breathe through internalized organs, using book lungs, due to their folded structure, in order to multiply the area or surface of the exchange.

Spiders have up to four pairs of eyes. However, their vision is generally poor.

Spiders are predatory, carnivorous. They parasitize prey using their venom, which they capture when caught in their web.

They chew their victims with their teeth that are part of their chelicerae. It injects its digestive juices. For what they do the external digestion of their prey, sorbing them.

They also have a kind of “hairs”, which serve to sift the food, separating the solid parts from the liquid ones.

Spiders are solitary and nocturnal. They usually run away from the light and hide.

They have sericigenic glands, located in the opisthosoma, with which they produce silk.

With that substance they build their webs or networks. And they even make a long thread that acts like a “sail” to navigate in the wind, in what they call “spider flight.”

The seat is produced by secreting glands called “rows”. Silk is a liquid substance, made up of proteins, that solidifies when it comes into contact with oxygen in the air.

The female spider cares for her offspring until they reach the appropriate development to capture prey for themselves.

And there are some cases, although rare, that the mother sacrifices herself to serve as initial food for her children.

The poison of spiders

Spiders use their venom to defend themselves against predators. Spiders are predators, which, in turn, are preyed upon by birds , snakes, toads , lizards , mammals , and other arthropods such as wasps, centipedes, scorpions.

But they have defense mechanisms against their predators. Spiders have two types of poison: a relatively mild one, to paralyze their victims, and a stronger one, to defend themselves against their enemies.

When they approach it, they receive its most powerful poison, which drives them away in most cases, and in some cases causes severe damage.

The venom is generally more potent in larger species. The active principle of the secreted poison is a neurotoxic, called whose effects last from 3 to 7 days, although only in a third of cases there are systemic effects, that is, they affect the entire body.

Some migalomorphic spiders, such as American tarantulas, have stinging beams, which irritate when touched and even cause severe damage to the eyes of those affected.

It has been observed that, despite being typically solitary, some spider species have developed certain social behaviors, such as grouping individual webs or collective nests, and cooperation between individuals.

And even certain community care of the young, which protect them in sacks against predators and parasites and to facilitate the provision of food. However, these behaviors are less elaborate and complex than those of bees, ants, and termites.

The males court the females with a kind of “ritual” dance, moving their pedipalps rhythmically.

Sometimes they offer the female, when approaching, a prey wrapped in silk or a lure, while introducing its spermatophore into the female’s sexual tract, with its pedipalps, which act, in this case, as copulatory organs.

After copulation, the female often devours the male.