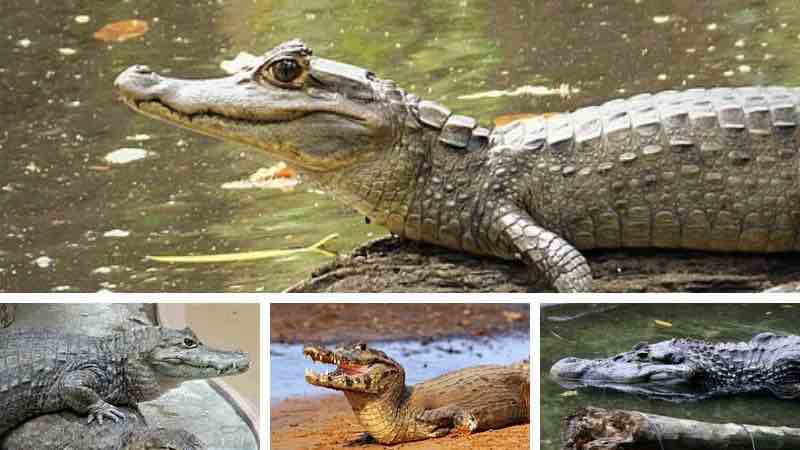 Several species of caimans have been recorded in the rivers of the Amazon basin. Some are now extinct, such as the late Miocene Caiman brevirostris, which lived in Urumaco, in the Venezuelan Amazon, or the Caiman venezuelensis, which lived at the beginning of the Pleistocene in some large Venezuelan rivers.

Other alligators are widely distributed in the rivers of the Americas, such as:

The Caiman crocodilus , known as the spectacled caiman or white caiman, is found in rivers from Central America to Venezuela.

The Melanosuchus niger, known as the black caiman or black caiman, prefers to inhabit calm waters of the Amazon basin such as gentle rivers, lakes, lagoons or oxbow lakes, flooded forests and swampy areas.

The Caiman yacare caiman in many cases shares the same habitat as the black caiman. In the Bolivian Amazon, programs have been developed for the protection and exploitation of this species.

In some cases, species overlapping occurs in some tributaries of the Amazon River, a phenomenon known as sympatry, in which species coexist in the same region, maintaining their identity through hybridization.

These reptiles are also sauropsids of the alligator family.

The caiman is very skillful and patient in hunting its potential prey, crouching motionless and hidden in the leaf litter. When they approach it, it suddenly makes a great leap, propelled by its hind legs and tail, catches it and carries it in its jaws to the bottom of the river to drown it, and then pulls it ashore to devour it, because it cannot eat in the water.

The alligator has a great sense of direction. When the waters get very low, they change places, even far from their usual habitat. Then, in the following season, when the waters rise again, it returns to its habitat without problems. Peru Ecológico (2006) says that they have a kind of radar to orient themselves.

The two most predatory animals in the Amazon basin are the caiman and the jaguar. I have seen them face each other, in some nature documentaries, and almost always the alligator gets the worst of it.

On land the jaguar, in water the alligator. Two irreconcilable enemies. Not only since now, but since a long time ago when they existed without much competition, after the dinosaurs disappeared, some 65 million years ago.

The extinction, or reduction, of large predators allowed medium-sized animals to thrive and become, in turn, the top predators of their time. This is the case of the alligator.

About 15 million years ago, the Amazon was a deep depression flooded by sea water, as the basin was like a kind of gulf opening into the Pacific Ocean, and was closed in the northeast.

Then, after further geological changes, the lake opened to the east, draining into the Atlantic Ocean as Africa separated from South America.

Then, the Amazon River and all the rivers in the basin changed their orientation. There, in the jungle that had formed over time, the jaguar’s reign began, while the caiman dominated the numerous rivers of the vast basin.

Thus, relatively large animals, such as big cats, sloths and giant armadillos on land, and large caimans or crocodiles and anacondas in the water, developed in the face of reduced competition from large predators.

The word caiman or Kaiman is of Taino origin. The term defines a genus of crocodilian reptiles, class Sauropsidae, and the family Alligatortidae are very common in Latin America, inhabiting from Mexico to Argentina.

✅ The first caimans in Amazonia

One of the most famous explorers of the first half of the 20th century was the British explorer Percy H. Fawcett (1867-1925). He made several trips to the Amazon. From the last one, in 1925, he did not return. He disappeared with his son near the Xingu River, in the Brazilian state of Mato Grosso. the fate of the explorers is unknown.

They were never heard from again, but Fawcett’s vehement accounts of the great cities lost in the jungle and how amazing he found the Amazonian fauna and flora.

See: Adventurers after the lost city of Z

He became famous for his stories about the Amazon. He claimed to have seen large animals unknown to most people, peppering his lectures with seemingly exaggerated scenes that amazed the listening audience.

He told about long anacondas, huge caimans, giant armadillos, and it was not clear if he was telling the truth.

Apparently, when you read today’s naturalists telling us about the ancestors of today’s alligators, you end up accepting that Fawcett may not always have been exaggerating.

✅ Fossil caimans from the Amazon region

Guerra-Turin (2011) says that in the Amazon some 15 million years ago there were huge crocodiles. He tells us about the fossil of a caiman found in the Amazon by paleontologists funded by the University of Toulouse and the French company Devenlay.

This fossil corresponded to an alligator about 14 m long and weighing 9 tons. Its head alone measured 1.3 meters. With that size and the power of its large jaws, this enormous reptile had the conditions to become the largest predator in the Amazon.

In 2011 a group of Peruvian and Austrian paleontologists, led by Dr. Klaus Honninger, discovered the fossilized remains of a giant crocodile in the Peruvian Amazon, dating back 20 million years.

In 2015 an international team of paleontologists discovered in 2015, in the Loreto region of the Amazon Peru, a series of fossils of seven species of crocodiles that lived there some 13 million years ago.

One of these species specialized in eating mollusks, which was considered a very strange diet among crocodiles. This group found fossils of three new species of caimans.

One was the alligator Gnatusuchus pebasensis, a crocodile with a very short, wide snout and a shovel-shaped jaw with globular teeth on the back. This caiman was closely related to the abundance of mollusks in the swamps that existed before the Amazon River was formed.

They also discovered and described two other new species of caimans. One was the Kultanacaiman iquitosensis, a primitive caiman. The other was the Caiman wannlangstoni.

Their findings were published in Proceedings B of the Royal Society of London (Brandoni, Noriega 2013).

Other researchers found in the Brazilian state of Acre a complete jawbone of a giant crocodile, a Purussaurus, measuring about 12 m long, which lived in the rivers and swamps of the Brazilian Amazon about 8 million years ago.

Large specimens of pink dolphins of the genus Inia and several species of crocodiles lived in the Amazonian rivers: a species of dwarf caiman (Paleosuchus), with a longer and higher snout, suitable for catching fish and other vertebrates.

Relatively little was known about the evolution of modern caimans, at least until the end of the 20th century, despite their interest due to the antiquity of the genus and the fact that crocodilians have the greatest diversity of species and forms, represented by the families Crocodylidae, Alligatoridae and Gavialidae, in correspondence with their abundance in the Miocene in what is now South America, and in particular in the Solimoes Formation, in the Brazilian states of Acre and Amazonas (Brandoni, Noriega 2013).