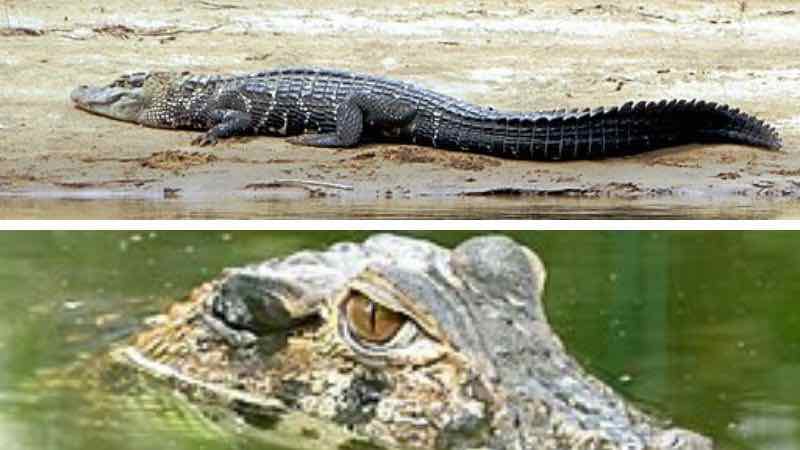 Black caiman or melanosuchus, which defines it, is composed of two Latin voices: melas, black, and soukhos, crocodile. The voice niger, on the other hand, is a reiteration of negro.

Where does the black alligator live?

The black caiman is distributed in all the countries of the Amazon River basin, but is limited to still waters below 250 meters above sea level.

Characteristics of the black caiman.

This species is the largest in the family Alligatoridae. At maturity, males can reach up to 4 m in length, although they have been found up to 6 m or more, as reported in the Amazon Peru (Peru Ecological Peru 2016).

This species shows sexual dimorphism: males, with an average length of 2.8 m, are larger than females, which average 2 m in size.

The black caiman has a long, broad snout, rough and rounded at the front end, with black spots. Its brownish-brown head has 3 to 5 black spots next to the jaws.

Cartilaginous nasal septum. Their eyes have very prominent superciliary arches, which protect them from the strong sun and its reflection on the water. The iris is yellowish green.

Bees and wasps land on their eyes to feed on mineral salts and some organic waste. The body of the species is black on the back, while its belly is yellowish or whitish.

With it they propel themselves through the water and swim swiftly (Ortiz, Rodríguez-Guerra 2019, Perú Ecológico 2006). On the flanks of the body there are several rows of large oval scales alternating with rows of small scales.

Maria (1955) notes that it is the only one among the extant crocodilae that has the vomer as an integral part of the palatine surface, between the mailars and the premaxillaries.

The body color of hatchlings or juveniles is black, with yellowish bars, while adults have rounded black spots next to the jaws (Ortiz, Rodríguez-Guerra 2019).

Habits of the black caiman.

The black caiman is considered the largest predator in the Amazon. It is a kind of battleship, almost indestructible, due to the hardness of its armor that is not pierced by the spears of the natives.

Its most vulnerable parts are its belly and sides, despite having a thick skin reinforced with bony plates. Professional hunters kill them by shooting them between the eyes.

It has nocturnal habits. He is seen sunbathing on the beach of the rivers.

What does the black caiman eat?

It is a generalist carnivore: it feeds on fish, turtles, lizards and other alligators, including young of its own species. In some rivers they also eat snails.

The species presents parental care while the eggs hatch in the nest. Each nest, made by the female with dry leaves and branches in gallery forests near river banks, can contain 35 to 70 eggs.

The eggs are ovoid in shape, 8 to 9 cm long and 5 to 6 cm wide. Hatchlings are born after 12 to 13 weeks, although there have been cases of hatching after only 6 weeks of incubation. But not all of them mature, which becomes a problem to ensure their reproduction.

Newborns weigh about 90 g, and measure 20 to 30 cm in length. During incubation the females jealously guard their nest, and then care for their young during the first weeks of life, as in a short time the hatchlings are able to forage for their own food (Ortiz, Rodríguez Guerra 2019, Perú Ecológico 2006, Albarracín, Madera 2011, Thorbjarnarson 2010, Villamarín-Jurado, Suárez 2007).

Although the black caiman is considered the largest predator in the rivers of the Amazon because of its large size, the strength of its bite and the toughness of its hide, it is also preyed upon and seriously threatened.

This species is considered endangered or vulnerable, as was the case until the recent past, when illegal poaching hunted them to trade, nationally and internationally, their skins, particularly the soft part of their belly, of great resistance, highly demanded for leather goods, to make wallets, handbags, belts, shoes.

The main predator of the black caiman is man, who hunts it for its skin and meat, and in some cases the jaguar, which battles against the caiman, even tearing open its belly skin with its claws.

In some parts of the Amazon their meat is eaten. The young and juveniles of this species are very vulnerable, and are preyed upon by animals such as the coati (Nasua nasua), the raposa (Didelphis sp.), the anaconda(Eunectes murinus), the river heron(Ardea cocoi, Camerodius albus), and the otter(Pteronura brasiliensis).

Another factor that threatens the conservation of the species is habitat fragmentation, which isolates and reduces their populations, and reduces their living area (Ortiz 2012, Dueñas 3008, Villamarín-Jurado, Marioni, Thorbjarnarson Nelson, Botero-Arias, Magnusson 2011).