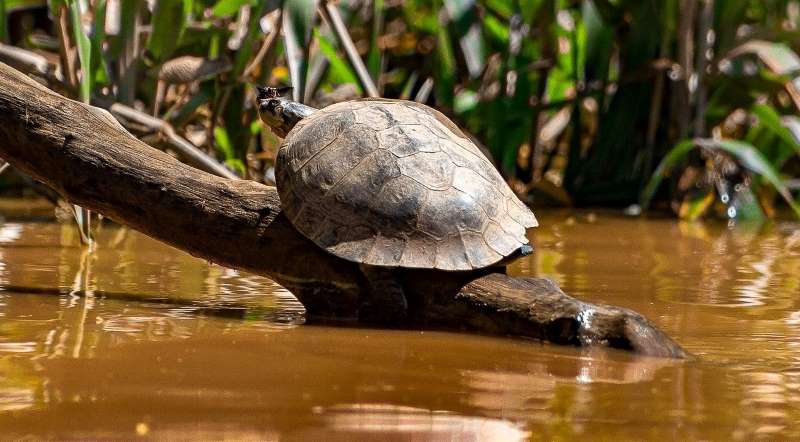 The charapa or arrau(Podonecmis expansa) is a large freshwater turtle, which can weigh between 50 and 65 kg and measure one meter.

✅ Characteristics of the charapa turtle.

It has broad, strong legs with membrane-bound toes, which it uses to move underwater, and a “snake” neck that it retracts horizontally.

Its carapace is hard, large, domed, greenish brown with dark spots on top and yellow underneath.

It is found in the large rivers of the Amazon and Orinoco basins, although less and less.

✅ Behavior of the species (Podocnemis expansa).

It is long-lived and has a late reproductive maturity. It feeds on fruits and seeds and small vertebrates.

It basks on the sandbanks or on the rocks.

Around it flutter butterflies and bees that seek the sodium of the charapa’s body fluids, tears.

Sodium is necessary for living beings, but in the Amazon it is a relatively scarce mineral, as it is rapidly and continuously washed away.
with every downpour.

The female turtle deposits her eggs, spherical and the size of a hen’s egg, in the sand of the beach, at the time of the emptying of the rivers, in an amount close to 150/200 eggs at a time, which makes it a very vulnerable species, because it has many predators.

The gestation period is 47 days. It is the largest freshwater turtle in the neotropics.

Newborn turtles are called “charitos”. This name is applied to the hatchlings of aquatic turtles, such as the charapa, the taricaya or the cupiso.

It is currently at risk due to indiscriminate hunting of turtles and their eggs since the end of the 19th century for commercial purposes.

The abundance of charapas in the rivers of the basin was legendary. At the mouth of the Meta River, a tributary of the Orinoco, there were many nesting sites by 1950: more than 1 million turtles were found along the Orinoco River, on islands and sandbanks. All this has been reduced to its minimum expression in barely half a century.

Turtles are also threatened by the massive construction of large hydroelectric dams, which alter the course of rivers, modify migratory routes and reduce nesting beaches, and by the contamination of water by mercury from legal and illegal gold mining.

On the other hand, the inhabitants of the Loreto region, and in particular the inhabitants of Iquitos, are also called charapa, derogatorily or in mockery, because of their characteristic way of speaking, fast and rapid, as if it were a machine gun.

By extension, this name is also applied to the inhabitants of the Peruvian Amazon.

It is a practice that has existed in the Peruvian Amazon since before the arrival of the Spaniards.

Quichua, or Quechua, permeated Peruvian Amazonian Spanish, marking what linguist Saldana called the “charapa dialect” (in allusion to the charapa turtle, Podocnemis expansa), which is prevalent in the Loreto region.

Pointed harpoon, without teeth and tied to a rope, used to catch charapas (Podocnemis expansa), which are collected by pulling on the rope.