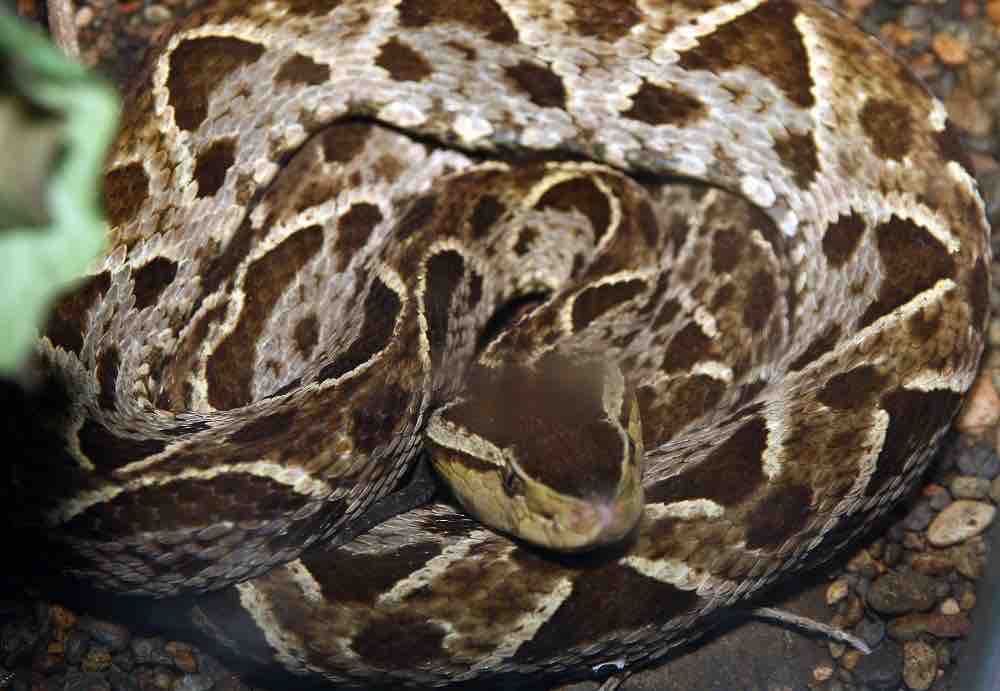 The velvet snake(Bothrops asper) is a very venomous crotaline snake, found in a variety of environments: in tropical rainforests, evergreen forests and even in drier regions such as tropical deciduous forests.

Its distribution goes from the south of Mexico, continues along Central America and South America, in Colombia, Venezuela, Ecuador and up to the north of Peru, in Tumbes.

It is famous everywhere for its lethality, which is only matched in the American lowlands by the mapanare(B. atrox) and the rattlesnake (Crotalus durissus).

But almost always in lowlands, from 0 to 1,200 meters above sea level, although it has been found in the highlands of Venezuela and Colombia, between 2,500 and 2,600 meters above sea level. Its adaptive flexibility, which leads it to venture into farm fields and the homes of villagers in search of Rodents, their favorite prey, have worked against their conservation, because they are considered a danger, as indeed they are in the vicinity of human settlements, and are eliminated.

Common names of the velvet snake

The velvet snake has many names, corresponding to the different regions where it is present: four noses in Mexico, yellow beard in Guatemala, serpent equis or equis in Panama and Ecuador, velvet snake is called culebra terciopelo in several places, especially in Costa Rica and Venezuela, mapaná, or talla equis (Colombia).

There is usually much confusion between this species and B. atrox, known as yellowbeard, and even with B. colombiensis.

Behavior of the velvet snake

The velvet snake is very nervous and irritable. It is used to rest under or confused with leaf litter.

Most accidents, some fatal if not attended to in time, are caused by someone carelessly stepping on them.

They are very fast and rise to bite, allowing them to bite their human victim above the knee. And they can even expel their strong venom, as fine jets, from the tip of their fangs up to a distance of almost 1.8 m (4 ft).

The four-nosed snake is nocturnal, and is a terrestrial animal, rarely climbing trees. When young, they have a tendency to climb trees, but not as adults.

Ordinarily, it does not attack without having been previously disturbed. She even tries to flee, but is fearsome when cornered and forced into a confrontation.

Specialists advise to let it go, without trying to kill it, because it is very aggressive.

The species presents a marked sexual dimorphism. The female is longer, thicker and heavier than the male. The female reaches a length of 1.85 to 2.5 m, and weighs about 6 kg.

The head of the velvet is very defined, with its triangular shape. The female’s head is two to three times larger than the male’s, and so are its tusks, which can be up to 2.5 cm long.

The snake has a series of small triangles on both sides of the body.

One of the most important peculiarities of the species is that it has, on each side of its head, a pit or depression called fossa lorealis, located between the eye and the snout, which the snake uses to detect potential prey that emits infrared radiation.

The loreal pit or thermoreceptor cavity is used by crotaline snakes to perceive from a distance, and even in complete darkness, to perceive animals that feed on the heat radiated by their own bodies.

It is not exclusive to the velvet snake because this fossette is possessed by several genera of the Viperidae family.

Reproduction of the four-nosed snake

Mating in this species occurs at various times of the year, and apparently biannually, but is related to the time of the heaviest rainfall. Gestation takes 180 to 240 days.

The young are born alive, it is a viviparous animal, in a litter of about 30 or more young. This reproductive form is not so common among snakes. According to University of Georgia biologist Whit Gibbons, only 15-20% of the 9,000 known snake species are viviparous.

Up to 90 hatchlings have been observed in a litter. But not all hatchlings survive.

The hatchlings feed by attracting small prey with the tips of their tails, which are yellowish when they are born, but later change color as they molt.

The bite, or “sting” as it is commonly called, is very poisonous, but must be treated promptly.

Antiophidic serums are very effective if applied in time. It immediately produces intense pain, oozing from the wound and increasing swelling in the affected limb.

If the wound becomes necrotic, amputation of the affected limb is necessary to save the patient.

What does the velvet snake eat?

The diet of the velvet snake is “generalist”, that is, they do not have specific requirements, but eat a wide variety of small animals: rats, mice, frogs, and even other snakes.

There is much confusion with the identification of the species for non-experts, and B. asper, the velvet, is confused with B. atrox, which is called yellow-headed, and B. colombiensis.

Although Calvete et al (2009) say that the venom that innoculates the victims is 65 to 70% similar in their venom proteomes.