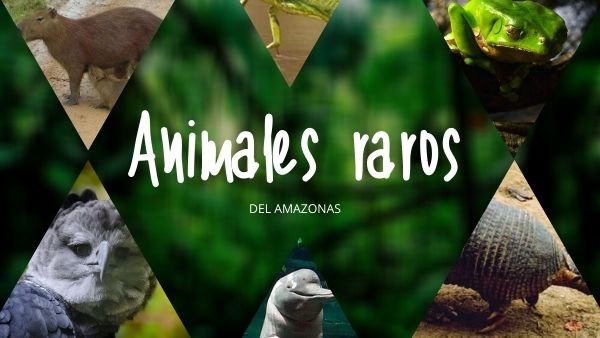 Each animal species has its rarity, its particularity. We classify as rare what we are not used to seeing. For theindigenous Amazonians, however, none of these animals is unusual.

But for those of us who live far from the jungleand we are more familiar with other types of fauna, such as domestic animals, barnyard animals or even native African animals (often influenced by the media to which we have been exposed) the following animals of the Amazon could be unusual and surprising.

Top 10 rare animals of the Amazon

Here we share a list of 10 rare animals of the Amazon but there are many more, each species has traits that make it unique. If you know other Amazonian animals that are not on this list and you think they should be, leave us your comment at the end of the article.

Boto colorado, tonina or bufeo (Inia geoffrensis, Inia Boliviensis, Inia araguaiensis)are common names of an aquatic mammal that inhabits many rivers of the Amazon basin and the Orinoco River basin in South America. It is also known as the Amazon dolphin.

At the beginning of the 21st century, little was known about the pink river dolphin, although since then it was considered a highly threatened species.

Hydrochoerus hydrochaeris is the largest and heaviest rodent in the world. Their eyes, ears, and nostrils are arranged on the top of their heads, a feature common to partially amphibian animals. If it notices dangerous situations, the capybara alerts the others in its group by emitting short barks so that they can quickly escape.

With its 2 meter wingspan (distance between the tips of its unfolded wings), the harpy eagle is the largest bird of prey in the Americas and one of the largest in the world. Its main habitat is the Amazon Rainforest.

A hallucinogenic tree frog also known as the Giant Monkey (Phyllomedusa bicolor) that lives in the Amazon is traditionally used by some tribes to hone their hunting instincts and as a powerful medicine against snake bites, malaria, yellow fever and other epidemic diseases. They also call it the ayahuasca of the animal kingdom.

The so-called scorpion wasp or giant sting wasp (Clistopyga Crassicaudata) uses its elongated stinger to reach spiders that live in deep holes in trees. After paralyzing its victims with its poison, it deposits its eggs in them, which is why they are called parasitoid wasps.

The also known as the giant toad (Rhinella marina) is a species of Amazonian toad whose mechanism of protection against its predators is to secrete a milky liquid that is poisonous through its skin. This species, which was very typical in the cane fields, invaded Australia and today its uses to treat cancer are being studied.

Rhynchophorus palmarum is at the same time a pest, a superfood and even a medicine. It is a pest because it destroys commercial crops causing significant economic losses. A super-food due to its high nutritional value used by many indigenous Amazonian communities to complement their diet. Especially during times when hunting and fishing products are scarce.

The Titanus giganteus reaches more than 17 cm in length in adulthood and is equipped with powerful jaws that can split a wooden pencil into two parts. It is a species that practically does not feed during its adult life. Much of its life is spent “underground”, tucked into the cavities of fallen and decomposed trunks, where it lives.

Also known as Piandes in Ecuador or Pasarroyos in Colombia (Basiliscus basiliscus), it is a truly exceptional animal. It has the ability to walk on water thanks to dermal lobes that function as fins, increasing the support surface on the bodies of water where it runs to flee from predators.

Also called armadillo,tatu, gurra, or giant cuspa (Priodontes maximus) is the largest of the 21 species of armadillos classified so far. It can measure up to 1 meter (not counting the tail) and weigh up to 40 kilograms.

However, this species cannot curl up on itself to become a ball and evade predators with its shell, instead when it feels threatened it opens a hole in the ground, with its huge claws, where it hides.