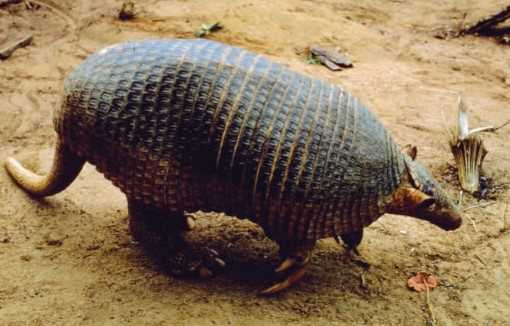 It is distributed in South America, from Colombia and Venezuela to northern Argentina, being found near bodies of water, in tropical forests, floodplains and savannahs.

It is considered a natural monument of the Argentine provinces of Formosa (1993) and Chaco (1996). However, its population is scarce, and in many parts it is already disappeared or reduced to its minimum expression.

The giant armadillo is, however, one of the “rarest, cryptic” and least studied species in South America (Aya-Cuero, Superina, Rodríguez-Bolaños 2015).

Characteristics of the giant armadillo

The body is bulky, composed of a flexible shell, made up of small, gray, polygonal plates that are yellowish towards the edges. The limbs are short.

The face is conical in shape, hairless. The head is elongated, the ears are small and widely spaced. On its legs it has large, robust and powerful claws, which can measure up to about 20 cm in the front extremities.

How big is the giant armadillo?

It is a mammal of the cingulata order, of the Dasypodidae family. The species has, like the other armadillos of the order, a dorsal shell lined with juxtaposed plates, arranged in transverse rows, with a long tail and short extremities. 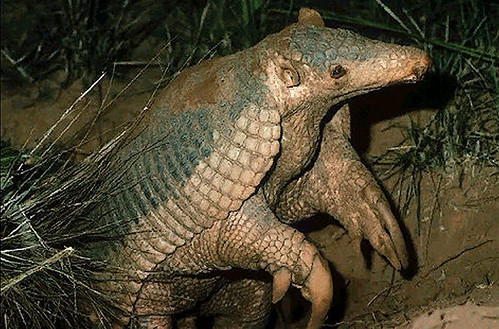 Behavior and reproduction of cachicamo

The giant armadillo is nocturnal, and is generally found solitary. He has a good sense of smell, although his other senses are poorly developed.

The cachicamo lives in burrows that it digs in areas that are not subject to flooding. It usually breeds in the summer season. Their gestation period lasts about four months. It usually gives birth to one calf only and rarely two calves.

What does the giant armadillo eat?

He walks about three km daily in search of food, which is basically insects, ants, termites, earthworms, spiders, maggots, larvae due to his condition.

It catches its prey using its tongue, which secretes a viscous substance that sticks to insects. It has about 100 teeth, all the same. It is the land mammal with the largest number of teeth.

Is the giant armadillo in danger of extinction?

Its biggest predator is the human being, who hunts it for its meat, its shell and its nails. It has been so intense that its wild population has been reduced in all South American countries. It has a low reproductive rate and its population is scarce, which threatens the conservation of the species.

Considered in danger of extinction since 2002 on the UMC Red List, due to excessive pressure from illegal hunting and the advance of deforestation, plantation crops and other economic activities such as the exploitation of hydrocarbons.

Its small population, the pressure of hunting, the fragmentation of the habitat, its large size and its reproductive habits (one offspring per birth) conspire against the survival of the species.