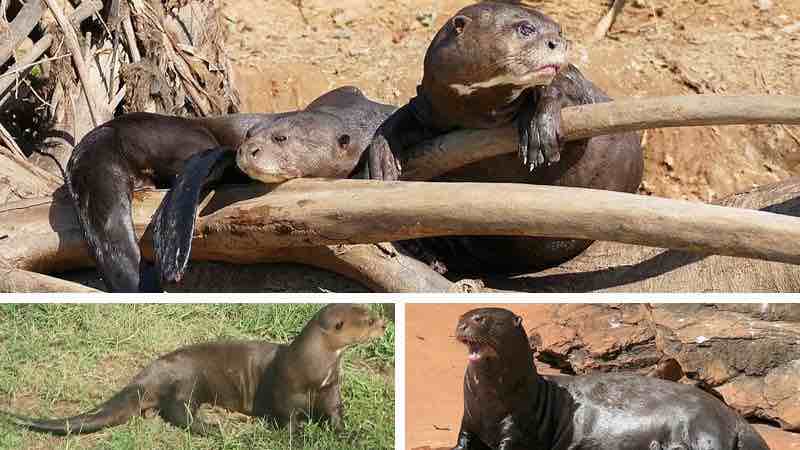 It is considered the longest species among the mustelids of the riparian and lacustrine environments of the neotropical zones.

It is large, as the male reaches a height of 1.80 meters. The giant otter is the longest of the 13 otter species in the world, although not the heaviest (Utreras, Jorgenson 2003).

It is considered that its ancestor was probably the satherium, which arrived in America during the Pliocene or early Pleistocene.

The giant otter inhabits almost exclusively the Amazon-Orinoquia river basin , although it has been extremely persecuted and hunted, to the point that its habitat has been significantly reduced.

It is a species, the only one in the genus Pteroneura, which has short, very dense hair, 8 mm thick, velvety in appearance, ranging in color from light brown to a darker shade.

It has a sort of knot on its neck (which is why it is also called choker wolf or tie wolf), ranging in color from cream to white, a unique spot for each individual, which allows its identification.

Its muzzle is short, its ears are small and rounded. The nose is covered with hairs.

It has vibrissae, like a moustache, which are used to detect changes in water pressure, very useful for locating prey.

Their limbs are short and thick. It has sharp claws, webbed feet, with interdigital membranes on the legs.

The tail is thick, wide and strong, in the shape of a wing, a characteristic that gives its name to its genus, derived from two Greek words: pteron, wing and ura, tail.

The tail, which can reach up to 69 cm in length, allows it to swim and move quickly in the water.

It has excellent eyesight, which favors it in the capture of its prey, complemented by a very acute hearing and a magnificent sense of smell.

It frequently emits vocalizations, very noisy, as signals of alarm, aggression, uneasiness, and even calm, depending on the situation or context in which it lives.

There are not many studies on the biology and behavior of the water dog. However, reviewing the existing information, it can be pointed out that it is a social animal, gregarious, very rarely solitary, that walks in groups of 2 to 8 or more individuals, and even up to 12 individuals of different ages, very united, with a sense of cooperation in the group.

They are territorial. Managed by a dominant couple, which brings together their sometimes large family.

Sometimes they come into conflict with individuals of the same species, which is common among predatory animals, known as intraspecific aggression, an unusual trait among mustelids. Their habits are diurnal.

In each group there is a dominant pair. Copulation takes place in the water.

The gestation period varies between 65 and 70 days, at the end of which the female gives birth to between one and five young, with an average of two young per birth.

The female gives birth in burrows, open cavities on the banks of rivers in hidden places with little traffic. The mother jealously watches over the development of her young.

Hatchlings are born blind and hairless. Around the first month of life they open their eyes, and by 12-14 weeks of age they are swimming with some dexterity.

The individual reaches sexual maturity at two years of age, when it separates from the group to form its own family.

Its life span in the wild is about eight years, while in captivity it reaches 17 to 19 years.

What does the giant river otter eat?

The ariranha is a predatory, carnivorous animal and feeds on many types of animals.

It is mainly piscivorous, closely related to the availability of food in its habitat.

It prefers black water rivers that flow in lowlands in the Amazon region. 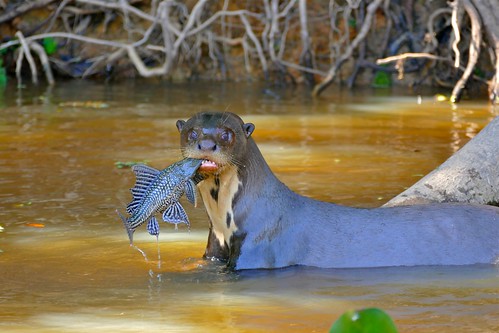 Each day the giant otter consumes about 10% of its body weight.

Is the giant otter endangered?

The Arnay ariray does not have many predators, although there are two more frequent predators: humans and the crocodile or black caiman(Melanosuchus niger).

The human being has been a relentless exterminator of the species. During the 1960s and 1970s, the giant otter was hunted and the pelts were targeted for export to Europe and the United States. And fat for local consumption.

This situation was repeated in all regions of the Amazon basin, except perhaps to a lesser degree in Guyana. In some regions it was much greater, as occurred in the northern Ecuadorian Amazon between 1942 and 1965, when almost 90% of the entire population of giant otters was killed.

The same happened in the Colombian Amazon during the infamous “tigrilleo” period, between 1940 and 1970, when the population of big cats such as jaguars and ocelots and giant otters was intensively hunted.

Because of its population decline, the giant otter was included in the IUCN red list as an endangered species in 1999.

Some other factors affect the conservation of the species, such as its relatively late sexual maturity, and the constant degradation of its habitat, to which the species is very sensitive.

The continuous and increasing deforestation in the headwaters and riverbanks, the growing mercury contamination of water as a result of mining operations and the advance of agriculture in the basin, which implied the use of pesticides.

Fortunately, the situation is changing, and the population is slowly recovering, following the establishment of community management plans in the Ecuadorian Amazon since 2004.

The formative elements of the ancient worldviews of the native Amazonian indigenous communities have exerted a certain influence to preserve certain species.

One of them was the giant otter. In the Ecuadorian Amazon, where the Kichwa, Shuar and Achuar indigenous peoples live, the river dog was considered a sacred animal.

It represented the metamorphosis of the water spirits called tshunki, or a yachak owner of the rivers.

She was recognized as yacu puma, a spirit or tutelary goddess protector of the lagoons (Jácome-Negrete 2016).

As this worldview, or at least the beliefs and traditions related to the giant otter, changed due to the influence of urban religion and the In the area of the Estrella Fluvial de Inírida, in Guainía, Colombia, the fishermen believe that the water dog, as it is called in the area of Estrella Fluvial de Inírida, in Guainía, Colombia, eats or scares away the fish, thus reducing fishing.

Mariaca-Villavicencio (2018) studies the coexistence between fishers and river otters, based on trophic interactions and human perceptions in the region.