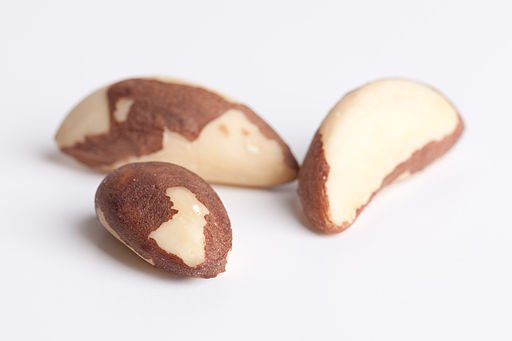 The Brazil nut ( Bertholletia excelsa ), Amazonian Brazil nut, Bolivian nut or Pará nut, is a species native to the Americas, and specifically endemic to the Amazon forest.

It is found in the non-flood zones of Brazil, Bolivia, Peru, Venezuela and the Guianas.

On the borders between Brazil and Bolivia, and Peru and Bolivia, there are large concentrations of trees of this species.

It is a species of spontaneous growth, of great longevity (carbon 14 has estimated 650 years of existence in some trees), found in the wild in the Amazon.

This circumstance favors its exploitation as an ecological protection species, since it is preferred to exploit its fruits rather than to cut down the tree that produces them.

Its seed is one of the few Amazonian forest products marketed worldwide, produced exclusively from wild trees.

The species is an important source of income for the local harvesting communities, which often threatens the local fauna, because thousands of people travel through the forest reducing the vegetation and threatening the extinction of some mammal species such as the spider monkey, of the genus Ateles.

It is a tree of the Lecythidaceae family, with a large size that can reach up to 60 m in height. Its trunk or shaft is cylindrical, devoid of branches up to the crown.

The bark is hard, rough, dark and split. Its leaves are strong, deciduous, concave, and its flowers have two to three sepals and six yellow petals.

The fruit, its main product, is a large, spherical or slightly flattened capsule, indehiscent (it does not open naturally when ripe), with a hard, woody shell, very similar to the coconut, which is why in Brazil it is also called coquito.

It takes 15 months to mature.

It contains 8 to 24 seeds, with an average of 18 seeds, angular, crescent-shaped, 4 to 7 cm long, with a leathery and rough shell, which have inside a white, woody kernel, covered by a brown skin.

An adult tree can bear 200 to 400 fruits, which are propagated by forest animals such as large rodents (Dasyprocta variegate and agouti paca) and capuchin monkeys (Cebus capucinus) . Hence, there is a very close relationship between the propagation of the species and the forest fauna.

The seed, once released, germinates one year later. Plants show a great variability among themselves, changing from year to year, from one tree to another, in relation to fruit production.

Ecology, propagation and processing of the “Amazonian chestnut”.

The plant can be multiplied by seed, grafting or by culture of mature embryos, although the usual way of propagation is by seed.

Coconuts are harvested when they fall off the tree, by natural ripening. Harvesters cut the top of each fruit with a machete to extract the seeds. Then the seeds are washed, eliminating the empty ones and those that suffered some damage when the coconut was cut.

Culinary and agroindustrial uses of the fruit

The nut is the fruit of a seed, while the seed is embryonic in nature. Thus, the nut is a fruit and a seed. It is composed of a hard layer that corresponds to the fruit, and an inner layer, the seed.

The seed or kernel, of high nutritional and economic value, is the most useful part of the fruit. It can be consumed raw or roasted, or used as an ingredient in the preparation of bakery products: cookies, cakes, pies, pastries, as well as candies, ice cream and various types of desserts.

Brazil nut milk, extracted from the crushing of fresh almonds, is used in the Brazil nut producing region, particularly in the Brazilian Amazonin the development of various typical dishes and in the treatment of many diseases, especially skin conditions such as acne and blemishes.

The oil, extracted from dehydrated almonds, has a good digestibility coefficient and is used as a lubricant and as a raw material for the production of fine soaps and cosmetics. From its residue, a flour rich in protein is produced, which is used, mixed with flour, to make bread. Or for animal feed products.

The wood of the tree, with a long shaft, is used in civil and naval construction, in the manufacture of furniture and pressed wood. A product used for caulking boats and making mats is extracted from the trunk shell.

The peel, both the fruit and the seed, has a high caloric value and is used to preheat cauldrons. It is also used in the elaboration of popular handicraft products.

Medicinal uses of this Amazonian nut

The medicinal uses of the different parts of the plant are numerous.

It is attributed properties as an emollient, anti-cancer (stomach, lung and breast), antioxidant, cardiovascular protector, insecticide, and is recommended, for its high nutritional value and its components in vitamins, minerals and fiber, against anemia, gastritis, hepatitis, high cholesterol, male impotence, slimming, to strengthen the immune system and hair, and to reduce juvenile acne.

The only contraindication to its consumption is for pregnant women, because the child may be born with asthma problems.

The high selenium content of the seed, estimated at 126 ppm2, has popularized it as an effective medicine against several types of cancer: stomach, breast, prostate and lung.

Almonds contain between 12 and 17% of complete protein, with all the essential amino acids. The flour, resulting from the grated almond, is rich in protein, and its oil in unsaturated fats.

Its most notable nutritional characteristic is its high selenium content, followed by magnesium and thiamine.

This richness means that its excessive consumption can cause selenosis, a disease caused by excessive selenium intake, which manifests itself in neurological effects, thinning hair, nail deformities and numbness of the limbs.

Some studies estimate that it contains 11% carbohydrates and 67% fat, with a high proportion of unsaturated fats, considered the highest among the different types of nuts.

The fruit can be contaminated by toxic substances produced by fungi, known as aflatoxins, which have hindered its commercialization in Europe for some years, to the point of preventing its exports.

Its high selenium content has also brought some drawbacks for its external commercialization.

Brazil was the largest, and only, producer and exporter of Brazil nut until the end of the 20th century, until Bolivia emerged, surpassing Brazil’s exports. Exports are now divided, in order of importance, between Bolivia, half, and the rest between Brazil and Peru.

The species is highly valued among native Amazonian indigenous communities, and very rarely a tree is cut, being more appreciated for the seeds, which are collected and traded, providing a permanent and regular income.

This circumstance has turned these communities into conservers of the species, in order to guarantee food security and the economic and social survival of their families.

However, this practice is changing with the development of purely extractive forestry in the Amazon, which exploits more than 200 tree species.

The fact that Brazil nut (Bertholletia excelsa) and piquiá(Caryocar villosum) are the largest trees in the Amazon has made them attractive for illegal logging.

However, logging is prohibited in Brazil and regulated in other Amazonian countries.