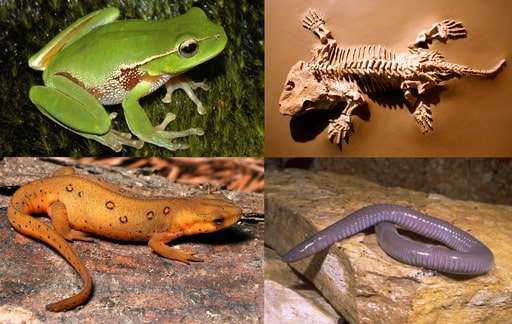 The amphibians of the Amazon Rainforest ( toads, frogs, salamanders or newts and caecilians), like those of the entire world, see their populations dramatically decrease year after year, in direct proportion to the systematic destruction of their habitat.

Only in the The Brazilian Amazon the timber industry destroys 10,000 to 15,000 km2 of forest each year (see: Deforestation in the Amazon ) which, together with the fires , water pollution by mining, among other causes, put at risk the survival of all 163 species of amphibians that inhabit the basin , at least on the Brazilian side (Azevedo-Ramos, C., & Galatti, U., 2002)

These little animals that some people find disgusting or unpleasant and that in fairy tales are associated with ugliness or hidden beauty, are important from many points of view.

Importance of the Amazon Rainforest Amphibians

Mainly, toads, frogs, salamanders and caecilians help maintain the balance in the Amazonian ecosystem, being consumers and prey, they are part of the food chain, being a source of protein even for humans (Cartay, 2019) as we will see later. when we talk about edible frogs .

Some species of toads and frogs (anurans) from the Amazon Rainforest are currently the subject of scientific studies that seek to take advantage of the substances they generate for medicinal use.

Although certain amphibians in the Amazon basin generate toxic or poisonous substances for humans (which are sometimes on their skin, sometimes in their eggs), laboratories are already finding relevant medical uses for them.

They are the cases of the kambo frog (regarded as “the ayahuasca of the animal kingdom”) and the cane toad (which invaded Australia) on which multiple scientific studies have been carried out on poisons that have shown their healing properties, which could be used to treat malaria, cancer and even AIDS.

The metamorphosis of the Amazon Amphibians.

The amphibians of the Amazon, like all other amphibians, are characterized by undergoing a surprising metamorphosis in their “adolescence”.

In the passage from their larval age (when they live in the water all the time, they have gill breathing and they have no limbs other than a tail to propel themselves) to their adult age, they develop 4 legs and lung breathing.

In ascending order, the three most biodiverse countries in the Amazon basin in the group of amphibians are: Ecuador , Colombia and Brazil .

However, taking into account the number of amphibian species per square kilometer, Ecuador takes first place.

But half of the amphibian species in Ecuador are not endemic, and introduced species such as the famous Bullfrog can be very harmful to the balance of local ecosystems.

Frog meat has many advantages, it is low in calories (it has fewer calories than any other type of meat) and it has “almost as much protein as fish, with low levels of fat.” (Cartay, 2019).

Many indigenous tribes in the Amazon consume frog meat.

Edible amphibians of the Amazon-Colombia

In the Amazonas department of the Colombian Amazon, in the “El Encanto” community, the Murui ethnic group consumes a wide range of frog species, among which the most important is the ooño or oona frog (Osteocephalus taurinus).

The so-called in english slender-legged tree frog is large with a dark brown belly and bronze to greenish color on the rest of the body (Read & Ron, 2011, 2016)

Many species of frogs are consumed in Ecuador, especially in the Amazon region.

In the rainy season, when the water pools anywhere, creating puddles that the frogs use to mate, the inhabitants of the Mutints area in the province of Morona Santiago in the Ecuadorian Amazon take the opportunity to hunt them. (Cartay, 2019).

Many frogs for human consumption are grown in frog houses. In Ecuador, in the areas of Zamora Chinchipe, there are at least 30 frog farms where they cultivate, among other species, the Bullfrog.

The Bullfrog (Rana catesbeiana, Lithobates catesbeiana) has been introduced in the Amazon and cultivated in frog farms in various countries of the basin, since it is highly sought after in the United States and Europe for various purposes (food, cosmetics, textiles, among others).

When in captivity, this large frog, which can weigh up to a kilo and has a voracious appetite, does not represent a major problem.

But since it has been released or introduced into the Amazon rainforest and reproduces wildly there as well, it is a fatal threat to the biodiversity of this habitat as it can eliminate amphibian and vertebrate species.

The predatory appetite of the individuals of this species is such that they come to devour each other, and can even eat parts of their own body.

In addition, many individuals of Rana catesbeiana raised in frog farms have developed a series of diseases.

The endogenous alternative to replace the cultivation of the Bullfrog could be the Rusu Mama (Gallardo, 2004)

Rana Mama, Rusu Mama or Rana Palmipes as an alternative to the Bullfrog.

The Rusu Mama or Rana Palmipes is an anuran that widely inhabits the entire Amazon basin, it is found in Bolivia , Brazil, Colombia , Ecuador , Peru and Venezuela , which has been proposed as an alternative to breeding the Bullfrog (Gallardo, 2004 )

The Rusu Mama, which is a terrestrial species, should not be confused with the Rana Cua, which lives in trees.

Although the Rusu Mama is also edible, endogenous and is not a voracious predator that endangers other species, it cannot compete with the bullfrog in terms of size and weight, since the former, as we have seen, can weigh up to 1 kg. in captivity, while the Rusu Mama in the adult state only reaches 230g (Gallardo, 2004)

To prepare them, they are first de-veined and skinned and then roasted, sometimes wrapping their meat in leaves. Restaurants can offer Rusu Mama milanese style or Rusu Mama au gratin (Gallardo, 2004).

But the business of frogs is not limited to the food industry where their legs, their liver (for pâté) and their meat are highly valued, but also reach the fashion industry (purses, belts, wallets are made with their skin). cosmetology (viscera) and production of surgical equipment (gloves are made with their intestines).

Similarly, some amphibians of the Amazon Rainforest, mainly the substances generated by toads and frogs, are the subject of constant scientific studies that could lead to amazing medical solutions, especially in the area of pharmacology.

More about the Kambo frog (poison and medicine)

Two specific examples are the case of the poisonous frog commonly called Kambo , used in indigenous rituals that today have gained popularity in the United States and Europe claiming some victims, and a poisonous toad known as Giant toad, cane toad or Rhinella marina that invaded Australia in the middle of the 20th century and whose poison today has proven to have anti-cancer properties.

More about the Giant Toad that cures cancer

The Amazon rainforest is not very rich in salamander species; of the 695 species (Blackburn, 2011) that have been recorded worldwide, most inhabit the Appalachian mountains in the United States.

Salamanders generally have nocturnal habits and although they are also amphibians, they differ from anurans (toads and frogs) in that they have a tail and lack a middle ear. In turn, they differ from lizards because they do not have scales.

These Amazonian amphibians differ from any other quadrupedal vertebrate due to their extraordinary ability to completely regenerate their limbs when they are amputated. Salamanders can even regenerate their internal organs.

This miraculous ability to regenerate is constantly the subject of scientific studies that see in it the possibility of being able to apply a similar cell regeneration in humans in the future (Brockes, 2005)

Among the most representative species of Amazonian salamanders we find

The Amazon salamander ( Bolitoglossa altamazonica ) which is widely distributed throughout the basin from the Tachira state in Venezuela to the floodable savannahs of Bolivia passing through all the other countries in the basin.

The Ecuadorian salamander ( Bolitoglossa equatoriana ), which has been widely identified in the Ecuadorian Amazon Rainforest, although it is believed that it must also inhabit similar areas in Colombia and Peru.

The Peruvian salamander ( Bolitoglossa peruviana ) similar to the Ecuadorian but smaller and without the mottled belly of the former, also shares Amazonian territory in Colombia, Ecuador and Peru.

The web of Ecuadorian amphibians.

In Ecuador there is a website dedicated to all the amphibians of this country. The site is part of the Bioweb portal, an Ecuadorian initiative based on the principles of creative commons that seeks to democratize access to information related to studies on flora and fauna biodiversity in that country.

According to this portal, 591 species of amphibians live in Ecuador, of which 268 are endemic. Almost half of these original species belong to the same genus called Pristimantis.
Of these endemic species, 182 live in the Amazon, where although some vulnerable species are counted, it is generally considered to be an area that provides better protection for species compared to other habitats such as the Andean foothills or the paramo, where more than 100 species have been listed as “endangered” on the IUCN Red List.