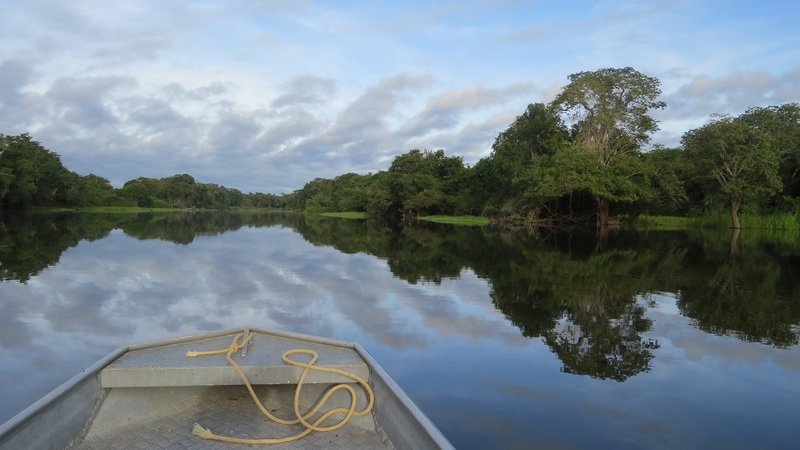 Fishing in Amazonas has its favorite places. It is not the same to fish in large and mighty rivers than to do it in slow, narrow and low-flow watercourses, such as ravines or streams and in lagoons or oxbow lakes.

The cocha , voice from the Quechua Kocha or kucha, is a kind of lagoon of different shapes (semicircular, rectangular or meandering) that the river forms when it is mighty.

The expression cocha cocha is used in the Amazon to refer to low places flooded by the effect of heavy rain or by the overflow of a river.

The Amazonian rivers are born, in general, in the summits of the Andes mountain range. Many are, at the beginning, at the head, a trickle of water, which gets bigger as it goes down, from the mountain, with force, dragging sediments.

Already in the low jungle , below 800 meters above sea level, the rivers flow more or less slowly, according to their flow and the unevenness in the area, generally forming curves or meanders in their long journeys.

The formation of the lake.

The mighty river forms meanders or curves, which it then closes or leaves abandoned according to the volume of water it carries.

The meander is the result of the force of the water that, at the same time, advances and recedes on the shore, forming a concave and a convex part.

From the combination of these two forces, one centrifugal and the other centripetal, the meander is formed, very frequent in rivers that flow through alluvial plains, with little slope.

Sometimes these meanders are very extensive, and form large lagoons or oxbow lakes.

The oxbow lake, also called tipishca, is a natural water reservoir that varies in size (there are large and small oxbow lakes) and has different shapes.

Some are extensive, rich in vegetation and fish , and are used as places of recreation during the weekends, when they are located near Amazonian cities, as is the case with Quistococha, in the vicinity of Iquitos , in the Peruvian Amazon .

The ecosystem of the lake.

The oxbow lake is generally shallow, and communicates with the river or with other oxbow lakes through pipes.

The ecosystem of the lake is very particular and rich in flora and fauna .

Aquatic plants abound: different types of grasses, floating plants such as water lilies, and water lilies or water roses, whose foliage or fruits , which grow underwater, serve as food for the fauna that houses the waters of the lake.

A large number of birds , fish , amphibians and mammals feed on this vegetation.

Two singular inhabitants of the cocha: the paiche and the manatee.

In the ecosystem of the cocha, the presence of the paiche ( Arapaima gigas ) and the Amazonian manatee , improperly called the sea cow ( Trichechus inunguis ), is very important.

The paiche is the largest freshwater fish in the Amazon. It reaches almost three meters and weighs more than 250 kilos.

The manatee is a large mammal, which can measure up to 2.80 meters and weigh more than 500 kilos.

Both the paiche and the manatee have been overexploited, particularly the manatee, for its highly prized meat, fat, skin, and bones.

The Amazonian manatee, the smallest of three existing manatee species in the world, is considered a vulnerable species.

Its gestation lasts twelve months and it gives birth to only one calf.

In the cocha, due to the proliferation of aquatic plants, there is less availability of light and oxygen. This circumstance drives the habits of the animal species it houses.

The manatee is herbivorous. It comes to the surface every ten minutes or so to breathe.

The paiche, on the other hand, complements its gill breathing with atmospheric air, for which it uses a swim bladder used as a lung. And it sticks its head out of the water to breathe every ten or fifteen minutes, emitting a sort of bellow, which the fishermen take advantage of to harpoon it.

Typology of the lagoons

The lagoons are classified into two types: of tectonic origin and of fluvial origin.

The lagoons of tectonic origin originated during the lifting and sinking processes of the earth’s surface. There are several tectonic gaps in the Amazon.

The lagoons of fluvial origin were formed as a consequence of the lateral migration of the watercourses.

River islands in the Amazon

The meander of a river can be isolated from the main channel, forming a tipishca, which surrounds a piece of land with water.

That portion of land surrounded by the river is also known as an island.

The deposited sediment gradually closes one end, isolating it to form a kocha, which is generally horseshoe or crescent-shaped.

Lagoons and rivers of white and black waters

The lands near the white water lakes, such as the banks of the great rivers, are highly disputed by indigenous people and settlers.

A great American anthropologist Donald L. Lathrap said that the struggle for scarce fertile land and the richness of the rivers has deeply marked the cultural history of the groups that have inhabited the Amazon basin .