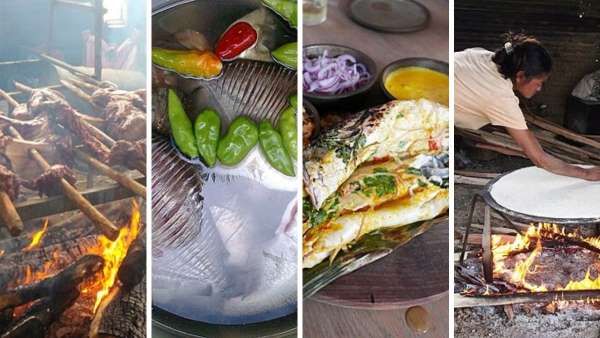 People talk about typical dishes of the Amazon region lightly, but in reality the original gastronomy of the jungle does not include this western kitchen utensil.

Fasten your seatbelt, we enter a wild culinary territory without etiquette rules, but with special eating rituals and a feast of unique flavors.

Protein is the order of the day in hunting and fishing for insects , amphibians , reptiles , mammals , fish , and birds .

Vitamins are within reach of a walk through the neighborhood of fruit trees.

Carbohydrates sprout in the orchards or farms typical of indigenous agriculture.

The condiments are generously provided by the jungle with its overwhelming number of plant species, she is also the pharmacy and the mother.

Some of the typical dishes of the Amazon region that we will share below are mentioned in Rafael Cartay’s Dictionary of Amazonian Cuisine.

The mazamorra is one of the typical culinary delights of the Amazon, especially in the Peruvian region . It is a thick soup to which fish or meat of any animal is added, as well as cooked and mashed green bananas.

There are different preparations of mazamorras such as smoked carachama, motelo, with beans, pomacea maculata, which is nothing more than a river snail that is very popular among the indigenous people.

The most popular porridge is the Inchicapi, made with peanuts and corn flour, both soaked, ground and mixed, which are boiled together with chicken pieces, regional cabbage, small-grain regional corn and chopped yucca , among others.

It has a fairly thick, substantial consistency, it is served in the riverside communities, mainly from the upper Huallaga, in the San Martín region, in Peru during the days of celebration.

In the gastronomy of the Amazon , soups and broths are quite daily preparations. Among them, the Ajicero stands out, which is a soup made with a fish head, which is usually made thicker by adding Fariña and is accompanied with cassava .

Another of the popular soups in the Amazon region is the Allpa-Poroto Api, it is very similar to a porridge that is also prepared with ground beans, ground peanuts, cassava leaves, among other ingredients.

We can also mention among the typical dishes the Anguilla Timbuchi soup, made with pieces of the fish, seasoned with onion, garlic, siuca coriander and salt. It is served with cooked green plantains and a chili sauce.

A rather peculiar and very typical dish of this Amazon region of Peru is Aucha, a soup prepared with peanuts.

Many of the typical foods of the Amazon are grilled. This is how fish and meat with salt are filled with vegetables such as cilantro, paprika and onion, and placed on the grill.

Like most traditional Amazonian dishes, grilled asado is also served with yucca, plantain, and hot pepper. The grilled asado that is prepared with fish is made from piranha , sábalo or bocachico.

One of the very typical preparations is canga , which is roasted meat that is dried on the grill or smoked. Each piece of meat is skewered on a stick or metal rod to be grilled or grilled. It comes from kanka, canca, Aymara voice that means roast meat.

Not everything is salty, sweet dishes also have their important space within the typical foods of the Amazon. Among them we can mention the desserts made with cupuaçu , a very nutritious Amazonian fruit . You can’t stop trying the Copoazú Cream, a sweet that they prepare with the pulp of the fruit, milk cream and condensed milk.

Another of the typical desserts of the Amazon are the Bueñuelos de yuca, which are made with cooked yucca dough, and other ingredients such as eggs, bicarbonate of soda, lard, sugar, cinnamon, salt and anise. The buñuelos are simple in their preparation and their flavor is incomparable.

We can also mention the Bolo de ñame con banana , a dessert made in the Amazon region of Brazil , this sweet is made with yam as the main element along with the banana and sugar, eggs, among other ingredients are added.

Casabe, another of the most famous typical dishes of the Amazon, since they use it to accompany most dishes that contain fish or meat, you can even find casabe pizzas , which is a tortilla or arepa made from yucca.

Casabe is made by many indigenous and mestizo peoples in the Amazon Basin in Bolivia , Peru , Ecuador , Colombia , and Venezuela .

🔥 Preparations wrapped in banana leaves or another type of leaf

The reason why the products are wrapped in banana or bijao leaves is because it allows the juice of, for example, fish or meat to combine with the flavor of the leaf and intensify, in addition to preserving the food.

Patarashca or patarasca is one of those dishes, it is a fish seasoned with a stew from the Amazon and wrapped in a banana or bijao leaf.

The stew is a sauce that is prepared with vegetables and Creole saffron or turmeric. Once wrapped, it can be roasted, parboiled or baked; the most traditional is to cook it under the embers of the stove. This dish is one of the favorites for tourists who come to live the experience of the Colombian Amazon.

Another preparation of this type is the Ayampaco , very typical of Ecuador, which is made with hearts of palm and fish, usually caracha or carachama, and is wrapped in bijao leaves, and then cooked on the grill.

In its evolution, the ayampaco accepted other meats from wild animals, as well as chicken, pork, frog, among others, and many other ingredients, such as onion, garlic, tomato, hearts of palm, olives.

An annual festival is dedicated to this preparation, very similar to the one known as Patarashca in the Colombian and Peruvian Amazon and in other Amazon regions.

Wrapping food in banana leaves or achira to heat or cook it is a culinary tradition of the indigenous people not only of the Amazon but of the entire continent. Examples of this are the well-known Mexican tamales or the Venezuelan, Colombian, Ecuadorian hallacas, the ayacas of Aruba among other similar preparations.

➡️ Typical drinks of the Amazon

One of the most common typical drinks throughout the Amazon region is masato, with its variants, with alcohol and without alcohol, they call it the beer of the jungle.

This is just a small sample of the delicious typical dishes of the Amazon, this extensive territory is made up of several countries and each one gives it a unique and particular touch that makes its gastronomy another invaluable treasure.