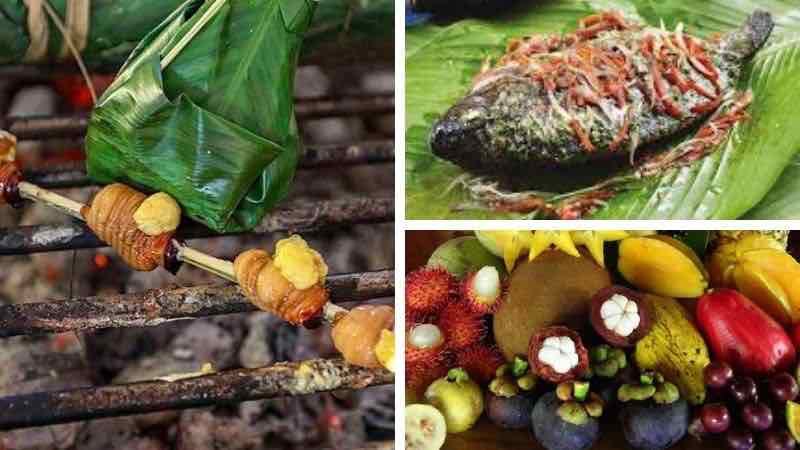 To study it better, the following aspects should be taken into account: geographical context, great chefs or exponents of the gastronomy of the Colombian Amazon, ingredients and typical dishes.

The regional population is distributed in six departments: Amazonas (the largest), Caquetá (the most urbanized), Guainía, Guaviare, Putumayo, Vaupés, and parts of other departments such as Meta and Vichada.

Strategic position of the Colombian Amazon and illicit activities

The Colombian Amazon, with an important part in the piedmont zone or High Amazon, occupies a strategic position in the Amazon basin: it contains the Amazonian trapezoid, or the triple border of Colombia, Peru and Brazil.

The Colombian Amazon region, which is exceptionally rich in biodiversity, shows great contrasts, with heavily intervened and colonized areas, especially in the northern and western parts, which have suffered from the expansion of agricultural areas, mining and drug trafficking.

The expansion of agriculture is very noticeable in the departments of Caquetá and Putumayo.

More than 80 percent of coca cultivation is concentrated in the Caquetá, Cauca and Putumayo foothills, while mining takes place in the Caquetá, Orteguaza, Vaupés and Guainía river basins.

The fact that it is a land of great colonization and a center of activities that, in part, border on illegality, gives the Colombian Amazon a very special condition of vulnerability from an environmental point of view.

The most populated cities in the Colombian Amazon are Florencia and Leticia. There are other cities such as Mitú, Mocoa, Inírida, but of lesser importance in terms of population.

Florencia is the capital of the department of Caquetá, the most urban in the region. It is the most populated city in the Amazon region of Colombia, with more than 168,000 inhabitants.

It is located in the corridor that connects the Andean foothills with the Amazon plain, which is why it is called the golden door of the Colombian Amazon. Florencia is home to the public university Universidad de la Amazonía.

Leticia is the capital of the department of Amazonas, the largest of the Amazonian portion. The city is home to some 79,000 inhabitants. In practice, however, it forms a single city with Tabatinga, a Brazilian municipality.

Leticia has no overland communication with the rest of Colombia, but as a port on the Amazon River, it has strong commercial links with Brazil.

✅ Gastronomy in the Colombian Amazon

Both species are large: the shrimp can reach up to one meter in length and weigh up to 30 kg. The pirarucu or paiche can measure up to 3 m and weigh more than 200 kg.

The top representative of high-level Amazonian cuisine in Colombia is Eduardo Martínez, complemented by his work team, in which Antonuela Ariza, plastic artist and cook, and Celmira Valencia, traditional cook from Guaipí, stand out.

Martinez is an agricultural engineer, graduated in 1996, and an excellent cook, a self-taught profession.

He has developed many entrepreneurial activities, including the creation of restaurants: Mini Mal, opened in 2001), Panóptico (2013), organizations such as the Equilibrio Foundation, created in 1998, of which he was executive director between 1999 and 2010.

One of his most socially committed works is the foundation of the Bogotá Workshop School in 2005, where young cooks from poor backgrounds are trained to reinsert them into the productive labor market.

The Escuela Taller is associated with the Panóptico restaurant, which is located in an old cultural building that is an emblematic cultural landmark in Bogotá.

Challenges in bringing it to large cities

Martinez is very active in his culinary endeavors. One of the biggest problems in making Amazonian cuisine, or rather, cooking with Amazonian products, is the lack of a marketing network that provides specialized restaurants with the most commonly used products from the Amazon, such as asaí, copoazú, worm larvae, freshwater fish, etc.

Large supermarkets in Bogota and major cities such as Medellin do not distribute such products, which becomes an important limitation for developing Amazonian cuisine outside the Amazon area.

Martinez and his group developed the initiative of the Selva Nevada organization, created in 2006, in order to establish a channel to supply Amazonian fruits, which supplies restaurants such as Mini Mal, Panóptico and others, and produces artisanal ice cream in Bogota, with Amazonian fruits.

Martinez points out that:

“the role of the cook is to validate and support the work of the farmer and the people in the rural area”.

Juan Santiago Gallegos Mejías is a young paisa cook, who established the restaurant La Chagra, in Medellín, where he practices signature cuisine with Amazonian products, in an effort to moderate the strong flavor of the traditional indigenous Amazonian cuisine.

Popular cuisine includes all the ways of preparing dishes at home with local and foreign ingredients, by means of this definition we can identify which are the typical dishes of each region.

The most common ingredients from this geographical area in Colombia are fish, roots or tubers, plants and even insects .

It is a preparation of fish that is salted and wrapped in banana leaves, and then buried in a hole in the sand or in the ground, which in turn is lined with banana leaves, and a bonfire is lit on top of it. Moqueado is served with yucca, cassava or roasted plantain.

This is another unique preparation offered in popular restaurants in the Amazon and is the larvae of the beetle Rhynchophorus palmarum.

Made with the toxic liquid extracted from the bitter yucca, and fariña, which is a powder obtained from processing the bitter yucca, leaving it submerged in water for three days, then grating it to obtain a flour, which is then toasted in a frying pan.

The most popular dessert is the copoazú cream, which is made with copoazú pulp, which is also called white cocoa, milk cream and condensed milk and cinnamon.