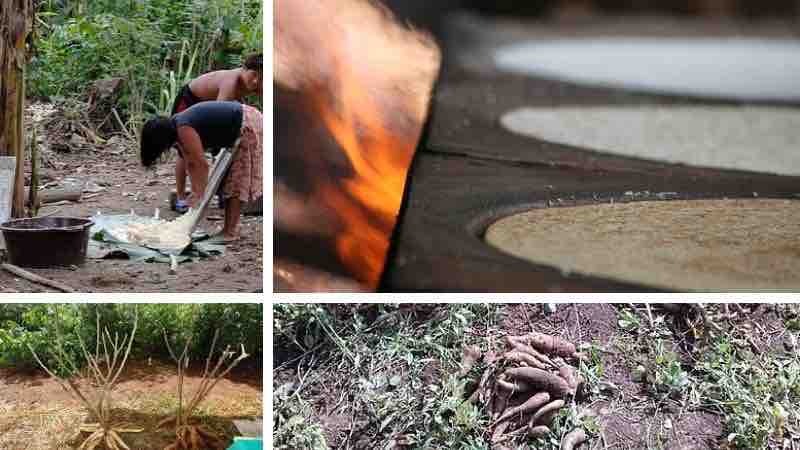 The cassava (Manihot esculenta Crantz), called mandioca in Brazil, is the fourth most important product of the basic food diet in the world, after rice, wheat and corn, serving as basic food for a little more than 1,000 million people in the world, who live in tropical and subtropical regions of the world.

Cassava is perhaps the most efficient tropical species in the production of carbohydrates per unit area.

Hence its great importance for the production of small farmers and the preference for low-income consumers.

Apart from the fact that a large number of recipes have been developed in the producing countries that are traditional and exquisite.

Those huge advantages of cultivation, have disadvantages. The biggest is that it is a victim of numerous pests and diseases and how little its harvested roots perish (Giraldo et al 2005).

The cassava plant is native to South America. Some specialists maintain that their primary center of origin is the highlands of Bolivia.

But most say that cassava originated more in the lowlands of the Amazon basin: the bitter or brave cultivars, with a higher amount of hydrocyanic acid, were located in the northeastern part of Brazil, and the sweet or meek varieties tend to be concentrated more towards the north of the basin.

However, the exact place of origin of the cassava plant in South America is unknown (Allem 1994; Renvoize 1973).

It is thought that it may have taken place in the western Amazon, in Brazil (Suárez, Mederos 2011), and that it was later taken to Peru, and then a little further north, to Colombia, Venezuelaand Panama, heading for Central America.

The cassava plant followed another route south, from Brazil, migrating to Paraguay and northeastern Argentina. This area is where fresh cassava is most consumed after cooking.

In Paraguay, for example, the highest per capita consumption of cassava in the Americas is recorded. That country has more than 300 varieties of cassava.

In all these transits, the plant was domesticated and improved, for more than 5,000 years in South America (Olsen, Schaal 2001).

The yucca plant belongs to the Euphorbiaceae family. The Manihot genus, to which it belongs, groups more than one hundred species, which are classified as sweet or meek and bitter or brave varieties.

That distinction is due to its content of hydrocyanic acid (HCN), also known as prussic acid or cyanide.

The bitter varieties contain more HCN (greater than 50 mg/L), although they have a higher yield and a better quality of starch (that is why they are preferred for the preparation of cassava cake).

Sweet varieties, meanwhile, have a low HCN content and are preferred for human consumption (Ospina, Ceballos 2002).

The yucca plant reaches 1.5 m to 4 m in height, depending on the variety. It has semi-woody stems and branches in its middle and upper part.

Its roots are fibrous and of two types. Some are used by the plant to provide itself with nutrients. The others, thicker and more developed, are responsible for storing carbohydrates (starch).

These last roots are the ones that can be used for human consumption, and can reach up to 1 m in length and weigh up to 8 kg.

The accumulation of dry root material accelerates from the sixth month. The root is cylindrical, fusiform and irregular in shape. The pulp is firm, hard, before cooking.

The color of the pulp is white or yellow. The plant propagates asexually, by means of stakes or cuttings obtained from the stem (Aguilar-Brenes et al 2017).

The yucca plant is easy to grow. It adapts to almost any kind of soil, and to a wide range of temperatures, but the optimum for sowing is between 25 and 29 °C.

It also adapts to both dry and humid areas, resists drought, but is sensitive to root flooding.

In general, the plant develops better in areas with abundant and well-distributed rainfall.

It can be grown in altitude ranges that go from 0 to 1,000 meters above sea level, although it is not recommended to plant it above 600 meters, because its vegetative cycle is prolonged and its yield per hectare is reduced.

The vegetative cycle of the plant, depending on the cultivated variety, ranges from 8 to 10 months.

If it is harvested earlier, the root hardens, affecting its culinary qualities, and it needs a longer cooking time.

The yield exceeds, in the less productive regions and using common varieties, 10 tons per hectare, but it can, in the best conditions, exceed 23 tons/ha, as is the case in India or China (Ospina, Ceballos 2002). .

Cassava is one of the essential items in the farm, chagraor conuco, which is one of the forms adopted by horticulture in the native Amazonian indigenous communities.

The farm, generally located several km from the individual or community dwelling, has the structure of a polyculture system, in which we find a variety of food and medicinal plants frequently used in the communities.

One of them is cassava. Some indigenous communities, such as the Yagua, from the Peruvian Amazon, plant some six varieties of sweet yucca, which is the basis of their diet and the raw material for masato, their most important drink in ritual acts.

In the case of the Yagua, the cassava plantation occupies about 80% of the cultivated surface of the farm.

Others, like the Matsigenka, plant some 30 varieties of sweet cassava, their staple food. Or the Bora, who grow some 32 varieties of both sweet and bitter cassava (Cartay 2016: 170-171).

Cassava is highly underrated nutritionally, but it is rich in fiber, carbohydrates, vitamin C and B6, and minerals such as potassium and magnesium. 100 g of cassava edible dry matter contains 160 kcal, 26.9 g carbohydrates, 0.4 g fat, 3.2 g protein, and 60% water.

Among the vitamins it contains, the most prominent are vitamins C, E and B6. Its main minerals include manganese, magnesium and potassium,

The most important economic product of the plant is the root, rich in starch, especially the bitter or brave varieties.

In South America it is common to find two types of starch: native or sweet starch and sour starch.

The native is usually used as a thickener, binder, stabilizer and texture improver in many industrially processed foods, such as soups, instant desserts, custard and custard mixes, sausages and deli meats, sauces, bakery and pastry products,ice cream, etc.

It is also used in the production of intermediate products such as maltodextrins, maltoses, glucose syrup, dextrose and yeasts.

Sour starch is used more directly for human consumption, in the preparation of some representative dishes of regional cuisines and in bakery products such as bono bread, cassava bread and the Colombian yucca cake, the farinha de mandioca, the farofa and the Brazilian tucupí sauce, and the casaba, the mañoco and the catara sauce in the Venezuelan Amazon.

And the pirónand the cassava fariña tortillas. The uses of cassava in African cuisine are also remarkable: like gari, or abachain Nigeria or kokontein Ghana, gogóin Cameroon.

In some regions, cassava biomass is used for ethanol production.

In some cases with great success. For example, Brazil managed, in 1980, to substitute about 20% of the gasoline used in its cars with ethanol made from cassava (Ospina, Ceballos 2002).