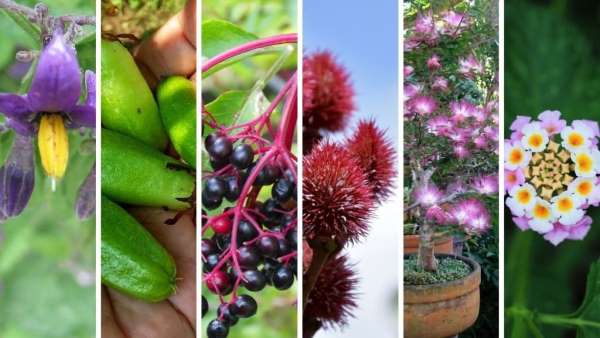 The medicinal plants of the Amazon that we will talk about next, and their powers or healing properties are frequently used by shamans, healers and by indigenous peoples in general to treat multiple conditions or diseases.

Among them, ayahuasca stands out, which is also considered a “teacher plant”. However, its importance is such that we have dedicated a special section to talk about it from different approaches and perspectives.

Where to buy Amazonian medicinal plants?

If you are living in one of the Amazonian countries such as Bolivia, Brazil, Colombia, Ecuador, Peru or Venezuela, it will not be difficult for you to find medicinal plants from the Amazon in popular markets or in stores specializing in herbs, branches or medicinal ointments.

It will be even easier if you are in a city near the jungle such as Iquitos, Manaus, Leticia , Puerto Francisco de Orellana or Puerto Ayacucho.

If this is not your case and you live in North America, Europe, Asia or Oceania, you should know that many of these products are sold worldwide in capsules or in powder, among other presentations.

This plant has digestive and stimulating properties , its leaves are used to fight skin infections. Also the water from the leaves can be used as a vaginal antiseptic.

Another benefit of achiote is in the treatment of hepatitis, by taking the liquid obtained from its leaf buds. Also, by making an infusion with three achiote leaves, vomiting can be treated.

The well-known cat’s claw is widely distributed in the Amazon region of Peru. The properties of this plant are really infinite, it is mainly anti- inflammatory.

It also strengthens the immune system and helps heal various diseases such as rheumatism, bad breath, ulcers, diabetes, hemorrhoids, among others.

One of the plants with a long tradition of use for medicinal purposes is sacha garlic . The Amazonian natives use its leaves macerated in liquor to calm various arthritis and rheumatism pains.

In the same way, this plant is taken by the jungle inhabitants who attribute to it the property of curing physical and psychological illnesses such as reinforcing self-esteem and will. Sacha Garlic has been proven to be an analgesic and restorative tonic .

The purple cariaquito whose scientific name is (Lantana morada) is present throughout the Amazon basin. From this plant its leaves and flowers are used to treat diseases of the respiratory tract.

In addition, thanks to its high content of lanthanine , it is used to reduce fever. And as additional information in popular belief, the purple cariaquito is used to take baths and ward off bad luck.

Nightshade is considered the penicillin of the indigenous people , this plant is used in infusions, skin creams and is also placed on food. Its leaves and stem have sudorific, purifying and soothing properties , which is why they are indicated in case of fluid retention.

Likewise, nightshade is useful for curing external wounds , acne, rashes, mosquito bites or allergies, due to its disinfectant and anti-inflammatory effect.

The scientific name of bubinzana or bobinsana is Calliandria angustifolia , it is a plant that comes from the Fabaceae family, which has great health benefits, widely used to treat arthritis and rheumatism .

It is also used to combat stomach ailments, colds and as a blood purifier. Its bark and root are used from this plant to make infusions.

The elderberry is a medicinal plant that belongs to the Caprifoliaceae family, its scientific name is ( Sambucus mexicana) and it is considered a medicine cabinet with which different natural remedies are prepared.

The properties of the elderberry are many and both the berries, the flowers and the leaves are used. The latter are used only for external use to relieve sprains, bumps, wounds. The flowers are used to treat respiratory conditions such as colds, allergies, colds, flu, sinusitis. The berries are used to improve rheumatism.

Yerba santa is widely used medicinally . The crushed leaves are used to treat infected wounds, rashes and insect bites, and the decoction in baths as an antipyretic, hypotensive, sedative and antibacterial.

Also to combat stomach pain, stomach spasms and headaches. The tender leaves are used in infusions against colds. It also has sudorific, astringent, antihemorrhoidal and antiparasitic properties.

Achira or Indian Cane (Canna indica) . It is a perennial plant that belongs to the plant kingdom of the Cannaceae family.

The Amazonian indigenous people have used this plant for medicinal purposes for a long time, the fresh leaves are used as a healing agent, the juice as an antiseptic , and the roots in decoction as a diuretic.

Fresh achira leaves are used to treat burns and skin infections . It is also believed that placing crushed leaves on the head helps relieve pain in that area.

Discover all the secrets of the achira!

The caigua or caihua belongs to the Cucurbitaceae family, its scientific name is Cyclanthera Pedata , this variety of vegetable is also known as achocha, achojcha, stuffed cucumber or archucha.

This plant contains fiber, minerals and vitamin C, D and is credited with a hypoglycemic power, that is, it reduces blood glucose, and antilipidemic, (eliminates fat), helping to control LDL cholesterol.

The airampu or airampo is a plant from which the bark, flowers, seed and root are used, and its fruits are edible. The seed is used as an effective laxative, tonic and febrifuge , in addition its flowers are used to treat intestinal parasites, fatigue and anemia.

In addition, consuming airampo juice is used to combat stomach ulcers, as well as to relieve symptoms in the appearance of chickenpox, measles. The seed of this plant is used to heal lesions on the lips.

The cocona known as Solanum sessiliflorum produces a yellow fruit, inside it a rich yellow pulp can be identified. It is considered dietary because of its low caloric intake, rich in dietary fibers , and recommended for patients with high cholesterol.

The use of its pulp, in juices, acts as medicine, against diabetes, excess uric acid, to treat kidney and liver diseases , to soothe itchy skin and also for venomous snake bites.

These medicinal plants are just some of the many found in the Amazon, we invite you to check for yourself the benefits of them if it is within your possibilities, you just have to consult your doctor if you can use them.