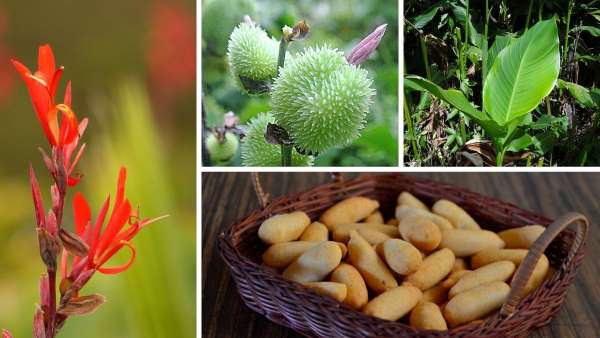 Discover all about the achira : a plant with surprising properties, with multiple names and multiple uses, food and medicine, resistant to pests, which, unfortunately, is cultivated and consumed less and less.

✅ 26 common names of the achira

The achira plant ( Canna indica ) has at least 26 names , apart from achira, derived from the word acuy, which is a Quechua word for sneezing.

It is called achira and sago in Cundinamarca, Colombia (which is an improper name, because it is confused with the sago palm, Maranta arundinacea , with long leaves and from whose trunk a type of starch similar to that of the achira is extracted). In other regions of Colombia they also call it chisgua or risgua .

They call it conga or atzera in Loja, Ecuador .

Canna or biri is another common name used to refer to this plant in Brazil .

They call it Zulu or pericagua in Peru .

As if that were not enough, in Mexico they call it burdock, Papantla and acaxochitl .

These vernacular names are used interchangeably to name other species of the Canna genus, apart from C. indica : C. coccinea, C. edulis, C. generalis, C. lutea , with which it closely resembles. Or simply, it is a taxonomic duplication of the scientific name for the same species.

The achira plant is native to America, probably from the lands of Peru, from where archaeologists have reported its cultivation since 2500 BC, others since about 4,500 years ago. At that time the indigenous people cultivated it to use its rhizomes as food.

Caicedo (2014) points out that Colombia was the center of dissemination of the plant. There it spread and is cultivated throughout the country. The achira is a plant that has been domesticated by indigenous communities, achieving a plant with great resistance to pests and diseases, and that currently requires little or no use of agrochemicals.

In the Valdivia culture, of the Ecuadorian coast, in the Pacific, one of the first original cultures of America, in the early formative period, developed in dates not yet well determined, between 4500/3500 and 2000/1800 BC, there is archaeological evidence from the cultivation and consumption of achira, cassava or cassava, lerén, a variety of corn, squash, beans, peanuts, sweet potatoes, and some fruits such as papaya, pineapple, cherimoya and avocado or avocado (Idrovo-Vallejo 2010).

✅ Botanical description of the achira

The achira is a perennial herbaceous plant of variable height. From the apex sprout the leaves, the floral stem and the stems.

The leaves are wide, green or purplish green, which can measure from 30 to 600 cm long and 10 to 25 cm wide, with a prominent central rib, a characteristic that gives it the ability to wrap food.

From its stem , which ranges from 0.40 to 2.5 m in height, long, creeping shoots emerge, with long, oblong leaves.

The fruits are capsules, from ellipsoid to globose, warty, 1.5 to 3 cm long, brown in colour, containing numerous hard black seeds .

The most used part of the plant is the rhizome , and it is the justification for its peasant cultivation.

The rhizome is fleshy, edible. It reaches about 60 cm in length and up to 25 kg in weight.

A starch is extracted from the rhizome and processed to produce a highly nutritious starch.

The rhizome is very perishable. To preserve it, it is customary to leave it underground until it is used, or, once harvested, smoke it to keep it longer at room temperature.

Two predominant types of achira are known: green and purple .

The green one has green leaves and white rhizomes.

A very widespread plant, and related to C. indica , is C. glauca , known as platanillo in several countries, including Ecuador and Venezuela.

This plant is not edible , and is used for ornamental purposes, and to use its leaves as a wrapper for foods, such as tamales and cheeses.

The plant is easy to propagate due to its wide adaptability and its great resistance to pests and disease, which seems to be a characteristic of Cannaceae. It is planted in furrows, which help conserve moisture, and also protect it from excess. The rhizome tends to emerge to the surface, showing a positive geotropism. The agronomic management is similar to that of the potato.

✅ Agronomic management of the achira

The achira is a rustic plant, easily adapted to different types of soils and altitudes (from 0 to 2,700 meters above sea level), highly resistant to pests and diseases.

It grows where there is little humidity, requiring moderate and well-distributed rainfall, between 500 and 1,200 mm.

It prefers loose soils, with a loamy or loamy-silty texture, rich in organic matter.

It tolerates acidity and grows well in soils with a pH of 4.5 to 8. Its cultivation adapts well to temperature ranges between 14-16 °C and 27-32 °C, depending on the cultivar.

Four cultivars are mainly planted in Colombia: foreign, red, natagueña and raizuela . The foreign one is the one with the largest and heaviest rhizomes (429 g of average weight per rhizome). In some countries, a production of 23 t/ha is reported after four months, and 85 t/ha after one year.

The plant propagates by rhizomes. The harvest takes place between 6 and 9 months after sowing, depending on the cultivar, the altitude and the type of soil.

But the actual harvest time is variable and problematic, because it constitutes a critical point for starch yield, and depends on the cultivar planted, the height above sea level of the plantation and the prevailing climatic conditions.

Harvesting is done manually, with the help of a shovel or barretón, in small production units.

✔ Reasons why it is grown

The achira is commonly used as an ornamental plant in gardens.

In some cases, the plant is used to purify wastewater, and to serve as a barrier to the invasive advance of grasses such as kikuyu ( Pennisetum clandestinum ), which spread easily and quickly on the surfaces where it is placed.

The plant is cultivated especially for its spherical, cylindrical or top-shaped rhizomes, which are 5 to 25 cm long and 3 to 12 cm wide.

Achira is traditionally cultivated in small peasant production units and in family gardens, allocating them mainly for self-consumption, which can add up, in Colombia alone, to some 800 hectares.

But it is an item that has been progressively reduced to less and less cultivated areas, due to the lack of technification of production and the lack of demand for the product.

The custom of wrapping prepared meals or food with its leaves has been lost in the Andean countries, to the extent that they urbanize. Achira is also cultivated in the central region of Ecuador, in the Pillaro canton, in the province of Tungurahua, at 2,800 meters above sea level (Arcos-Jácome 2015).

Caicedo (2000) points out that about ten cultivated cultivars have been identified.

The average biomass production is 21 t/ha at the time of harvest, that is, considering leaves, stems, corms and other plant parts.

The achira rhizome contains abundant water, abundant carbohydrates, low levels of protein, and high doses of ascorbic acid, vitamin A, and minerals such as calcium, iron, potassium, and magnesium. Starch is extracted from the rhizome, which is a polysaccharide carbohydrate, which constitutes a food reserve for plants, and is made up of amylose and amylopectin. Achira starch is considered a starch of excellent quality.

The comparative nutritional analyzes of the white and purple achira varieties, carried out by Arcos-Jácome (2015) give the following results:

The edible part of the plant is the rhizome or corm. It can be consumed raw, grated or in salads. Roasted or fried, cut into thin slices.

It is also processed to extract a starch that has great nutritional value, apart from its reputed medicinal properties ( diuretic, healing, immune system booster and others ). Even some specialists point out that even being boiled, the rhizome maintains its nutritional properties.

✔ How to prepare achira starch?

To prepare starch, the rhizomes are grated, placed in water, the fibers are decanted and the starch is dried.

This starch has the largest grains among those known. Easy to separate and transparent when cooked.

The red vs the green

In the food industry, the red-flowered achira is more widely used, because it has a thicker root and is richer in some minerals such as calcium and iron . But the most appreciated variety is the white or yunga achira, which produces comparatively higher quality starch and a greater number of rhizomes.

With the starch, mainly in the Colombian departments of Cundinamarca and Huila, achira biscuits, sago bread, various collations, cookies, cakes, noodles and noodles are made.

Small “ralanderías” still operate in these departments, which are in charge of processing the rhizomes to extract the starch.

How is the achira cake prepared?

It is made with achira starch, fresh curd, egg yolks, salt and butter. A dough is made with the mixture of all the ingredients. Let it rest and then the biscuits are shaped and baked in a buttered mold for 12 minutes at a temperature of 300 °C.

In some Venezuelan regions the use of the achira rhizome is popular.

This is what happens in the coastal region of the state of Sucre, on the Paria peninsula, where an atol is made for children, the elderly and convalescents, based on the belief of its great nutritional power and easy digestibility.

In Ecuador, a colada is prepared for children after weaning, known as the Colada de Niño or Chuno, which is made with achira starch, panela honey, naranjilla, cinnamon and cloves.

In some areas of Ecuador, such as the province of Azuay, sweet starch bread, known as achiras, is made.

Achira leaves are used as food wrap in the Amazon basin and in rural areas of many Latin American and Caribbean countries, particularly tamales, buns, quimbolitos, hallacas (in the area of Pregonero, Táchira state, Venezuela ), and as fodder for animals.

According to Díaz Piedrahita (2012), the use of achira leaves is very widespread in Colombia, with the purpose of wrapping different foods for commercialization, packing typical foods and also as food, it is well documented since the mid-eighteenth century.

✔ Figures that reveal a change in diets

Gonzáles-Benavides pointed out in 1987 that in Colombia achira was cultivated mainly in the departments of Cundinamarca, in the east, and in Huila, in the south.

At that time, some 1,400 tons of achira starch were produced in Colombia per year thanks to the efforts of 1,169 small producers.

The greatest use of starch, then, was as a raw material for the preparation of achira biscuits, produced by some 266 companies, of the artisanal bakery type, which generated some 2,537 permanent jobs.

These figures show that achira cultivation was deeply rooted in the regional economies and in the gastronomic customs of some departments of Colombia.

The changes mentioned, both in the production and consumption of achira starch and its by-products, are a clear manifestation of changes in diets in some regions of Colombia.

✔ Other uses of the rhizome and seeds

The rhizome is quite similar to the potato, and is prepared and eaten in a similar way, but it is harder and takes longer to cook than the potato. The rhizome and other parts of the plant are used for human consumption and as animal fodder (particularly stems and leaves), and for agribusiness (specialized in the production of starch, for baking and to thicken soups).

The seeds , small, spherical, hard and black, are used by artisans to make necklaces, bracelets and rattles or maracas.

Various parts of the plant are used for medicinal purposes: the rhizome, the leaves, and even the seeds.