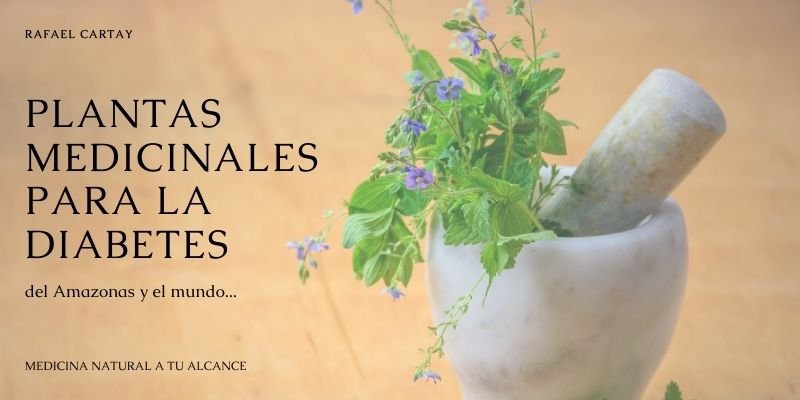 There are many medicinal plants used worldwide to combat diabetes, most of which we know are of Asian origin.

However, in the Amazon we also have a great variety of powerful plants that can help us to treat a diabetic condition.

Medicinal plants for diabetes that will help us to lower blood glucose levels, hypertension, cholesterol, plants with hypoglycemic properties and even those that serve to stimulate insulin production.

How to treat overweight, obesity and diabetes?

There are several ways:

a) that the person changes his or her inconvenient lifestyle;

b) with pharmacological treatment (with drugs such as Orlistat or Naltrexone-bupropion);

Phytotherapy has, in this case, four types of plants:

Among thesatiating and nutrient absorption-reducing plants, the best known are the Asian ones, mainly from China and India:

2. Plants that decrease the absorption of sugars (which combat the resistance to I).

Among those that decrease the absorption of sugars are

Among those with thermogenic activity, the following stand out:

All about Guarana, the most sought after fruit in the Amazon: scientific name, taxonomy, properties, medicinal uses and more.

Among those that inhibit lipogenesis and control appetite is garcinia (Garcinia cambogia), a Southeast Asian shrub.

Most of the known medicinal plants that lower blood glucose levels belong to the ancient folk medicine of China or India, many used in Ayurvedic medicine, such as the Centaura aspera the burdock, the zaragotana, the morphodic, the harpagofito, the ispagula, the galega, etc.

Is guarana the only plant useful for treating diabetes found in the Amazon basin?

In fact, there are other plants besides guarana that are commonly found throughout the Amazon basin.

Overweight, obesity and diabetes are intertwined evils in the medium term.

The human organism runs on energy.

An energy that, according to the first law of thermodynamics, is neither created nor destroyed, but transformed.

The sources of energy for the body are carbohydrates (CH), protein (P) and lipids or fats (L), which provide calories to the body.

When demanding energy (E), the first candidates to cover it are the HCs.

If their quantity and quality is not sufficient, L and P come into action, according to the energetic situation of people’s energy intake and energy expenditure.

But the bioavailability of food is not 100%, because losses occur mainly in urine and feces.

Total energy expenditure (TEE) is made up of:

EBG accounts for almost 2/3 (60%) of the TSG, and varies according to body composition, sex and weight: it is higher in males and heavier individuals.

GET is the expenditure for internal processing of food in nutrients, and is equivalent to about 10 % of GET: higher in P processing, and then in HC and L.

The GEF is equivalent to about 30% of the GET, as a consequence of programmed physical exercise and spontaneous physical activities.

The relationship between energy intake and expenditure depends on the appearance on the scene of that undesirable trio: overweight, obesity and diabetes.

1) an imbalance between intake and expenditure;

2) genetic deficit of the weight control system, and

3) of both. Overweight heralds obesity, and obesity is related to the metabolic syndrome, which corresponds to risk factors for cardiovascular disease and the onset of type 2 diabetes (hyperglycemia, hypertriglyceridemia, low levels of HDL cholesterol and high levels of LDL cholesterol in the blood, hypertension and central obesity) and insulin resistance (I).

Each time one ingests food, glycemia increases, and the concentration of Ia I in the blood.

I is a hormone that replenishes energy reserves. L accumulate in the adipocytes of adipose tissue, which change their diameter and volume to accommodate triglycerides as an energy reserve.

But the same is not true for L and P, with limited capacity to reserve energy.

Hypertrophied adipose tissue does not respond to the antilipid signals of I. And resistance to I is produced by an excess of free fatty acids at the plasma level.

And that torrent of free fatty acids reaches the liver. If this is prolonged over time, the person suffers cardiovascular complications such as acute myocardial infarction.