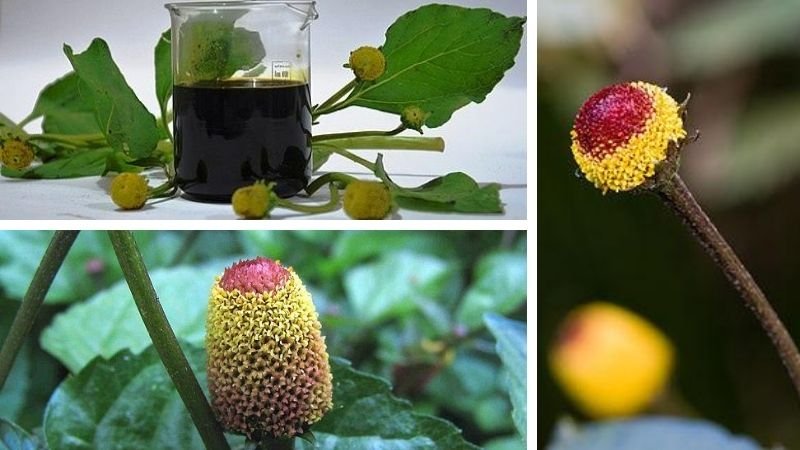 Little by little, all these supposed virtues of medicinal plants are being subjected to rigorous tests in laboratories around the world to verify their potential and promising uses for the pharmaceutical, cosmetic and chemical industries.

For many it is an unknown plant, but it is not, in fact, a mysterious or newly discovered herb for its culinary uses.

It is mostly called jambú, and in the Brazilian and Peruvian Amazon, where it is native, it is widely used in regional Amazonian cuisine.

Jambú is an annual, perennial herbaceous plant that multiplies by seed or by cuttings.

Semi-erect or almost creeping, up to 40 cm high, but usually about 20 cm, with cylindrical stem, fleshy, compound leaves, opposite, petiolate and yellow flowers.

It is a plant that has an enormous capacity to adapt to tropical and subtropical climates, and is easy to spread. That is why we find it in gardens located in several continents.

One is that the flower of the plant resembles a daisy without petals, because of its yellow color. In fact, the daisy and the jambú belong to the same family: Asteraceae.

Where does Jambú grow wild?

Abundant in northern Brazil. There it is an essential ingredient in several culinary preparations, but especially in the tacaca soup.

This soup is a traditional preparation of some Amazonian states such as Pará, Amazonas, Amapá, which the popular tacazeiras sell in street stalls on public roads in the late afternoon.

The tacacá soup is a succulent preparation that is served very hot, and is eaten directly from the jar where it is served.

This sensation stimulates the secretion of saliva and facilitates and intensifies the tasting of food.

The curious thing is that jambú is also found in some traditional dishes of Southeast Asian and Indian cuisine.

As it is not native to that continent, it is believed that it was probably carried on its transoceanic voyages by Portuguese sailors from the Brazilian colony to Asia, (Di Stasi et al 1994); and from there it spread easily throughout the Asian continent, reaching the Southeast and India, where it is widely used.

The truth is that chewing a sprig of jambú leaves numbs the lips and the tip of the tongue.

In northern Brazil, and also in India, it is used to relieve toothache and throat diseases.

And even to cure tuberculosis. In infusion, it is used to combat anemia, dyspepsia and to stimulate stomach movement and appetite (Di-Stasi et al 1994).

The active ingredient responsible for this numbing sensation is espilantol, obtained from the leaves, flowers and stem of the plant.

The active ingredient of spilanthol is the antiseptic alkaloid N- isobutylimada of (2E, 6Z, 8E)-dea-2,6,8-Trienoic acid.

This chemical composition has opened great possibilities for the use of its extract in the pharmaceutical, cosmetic, food, and toiletry industries such as soaps (Ogata-Nomura et al. 2013; Nakatani et al 2014; Muñoz-Acevedo et al 2015; Uthpala, Navaratne 2020).

Uses of jambú in the pharmaceutical industry

In the pharmaceutical industry, its anti-inflammatory properties of dental and gum infections are explored (Ogata-Nomura 2013; Barbosa et al 2017).

In Brazil, scientists from the University of Campinas (Unicamp) created with its extract a very thin film used as a pre-anesthetic for oral use in dentistry so that the patient can endure the pain of the needle prick during anesthesia.

An essential oil rich in antioxidants and with diuretic and anti-inflammatory properties is obtained from the leaves.

Jambú in the cosmetic industry

In cosmetics, the extract is used to make creams that are considered a kind of natural or biological Botox: its application is said to reduce the microscopic tension produced in the skin cells when the muscles of the face contract, preventing facial expression lines (Gilbert, Favoreto 2010; Muñoz-Acevedo et al 2015).

With jambú oil, mixed with menthol, a gel is prepared that is used to reduce dark circles under the eyes that occur in people who are very fatigued, insomniacs or under emotional stress.

With jambú tincture, a vegan lozenge has been created that is bitten to clean teeth, and toothpastes for sensitive teeth and gums are being experimented with.

A cream has even been created to be used as a lubricant for intimate use that produces a presumably exciting and pleasant sensation in the sexual organs.

Research is also being conducted on its potential use in fertilizer compounds (De Silva-Borges et al 2016).

It is also used in the production of an effective plant-based acaricide to repel and kill ticks (Bawitlung et al 2010).

Its action against harmful pests in agriculture, such as the lepidopteran Tula absoluta, which causes serious damage to tomato crops, has also been proven (Moreno et al 2011).

In central Italy, jambú essential oil is used to make a low-toxicity insecticide to repel mosquitoes and flies, and other insects (Bawitlung- Laithanpuii 2010; Benelli et al 2019).