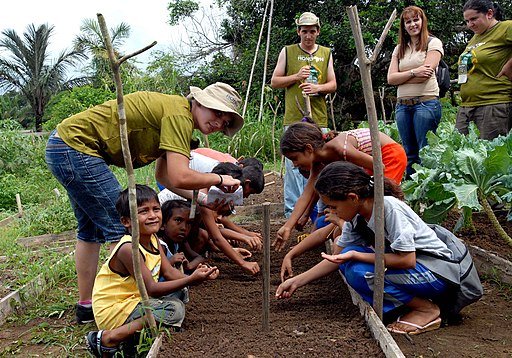 In the Amazon jungle, the humble farm is an important source of food—on par with hunting and fishing.

The farm is not only as important as hunting and fishing, but it is the most stable and secure among the three. Farm products remove uncertainty when the other two sources are scarce or are subject to high stress or overexploitation.

The farm in Ecuador is called chagra or chacra, a Quechua word. In Venezuela and Colombia the word conuco describes the polyculture system, which mimics the diversity of natural ecosystems. These systems have several ecological advantages. For example, the use of plants that resist pests and disease reduce the need for agricultural inputs such as fertilizers and agrochemicals.

Specialists refer to two types of farms ( 1 ): a) highland or firm land and b) floodplain or lowland. A third type of cultivation, although very restricted, is c) the family garden.

Highland farming is practiced at higher elevations and is not subject to flooding; however,  generally the soil is not very fertile. It is poor in nutrients and high in acidity. Highland farming is migratory agriculture that uses the slash-and-burn system, which is known by the name chacra.

Due to the low fertility of the soil, it has between 6 to 10 years of cultivation followed by a long period of rest called purma.

No fertilizers are used other than the organic matter that remains after the slashing and burning.

The purma is an abandoned farm that continues to produce some products such as musaceae, sacha potato or yam, fruit trees, and palm drupes. Over time, it becomes a secondary forest.

2. The floodplain or lowland farm

The other type of agriculture takes place in floodplains or lowlands that geographers call várzea, a Brazilian term.

It is a semi-intensive agriculture practiced in the restinga: the shallows and beaches that depend on the rising and emptying of the large rivers.

When the waters recede, large areas along the coast are used for short-cycle crops such as watermelons, melons, cucumbers, and other cucurbits (members of the gourd family).

Residents nearby sell the crops to buy home goods and daily necessities.

The family garden is a relatively small area near the house that is used to grow medicinal or seasoning herbs.

These forms of agriculture fall into two broad categories: a) subsistence or self-consumption agriculture and b) commercial agriculture that is sold at the market to obtain a monetary income.

Subsistence agriculture is practiced in rural communities far from urban centers where there is little or no contact with the market.

Cultivation relies on family labor, generally women and children. In many indigenous groups it is an almost exclusively female activity.

Males, on the other hand, slash and burn the trees and make ready the plots of land to start the farm.This system remains unchanged only among groups in isolation or those with little external contact ( 2 ). The distribution of the harvest is based on networks of solidarity, affiliations, and marital alliances.

Commercial agriculture produces large proportions of food for the urban market. It is commercialized and monetized so that producers can sell their crops and buy goods such as utensils, tools, matches, electric batteries, clothing, and footwear as well as industrialized foods such as rice, noodles, sugar, and salt.

Comparative analysis between these two categories

These two production systems reflect two opposite ways of being in the world.

The first, subsistence agriculture, is governed by the communal principles of reciprocity, complementarity, and distribution and exchange. Political ecologist, James C. Scott, called it “moral economy”－a co-responsibility with the cosmos.

The second, the capitalist market economy, uses the framework of agricultural production of native communities, but it is basically guided by the principles of economic profit and individualism. It is a worldview that fragments the reality of the world from the perspective of the original Amazonian view of the universe.

The market economy appropriates natural resources for the benefit of private property and personal accumulation.

Subsistence agriculture and the market economy are conflicting visions of the world and of the principles of solidarity that are the basis of Amazonian indigenous societies.

Subsistence agriculture, based on a reciprocity system, uses the economy of the “gift” in which each gift must be received and reciprocated in a process that honors both the giver and the recipient (3 ).This exchange of gifts takes place in informal contexts when returning from the farm or after hunting or fishing. It is also found in formal contexts such as in ritual spaces that are staged within the group at the beginning of a promising harvest or upon returning from a successful hunting party (4 ).

In the second vision, the market economy, the purpose is not to promote an equitable distribution of products but to raise the standard of living of individual producers through a system of accumulation of material wealth, even if it is a modest level.

These two worldviews or ways of being in relation to the productive sphere generally do not occur separately but are often simultaneous, especially in the cases of native communities close to urban centers where highways have facilitated social relations.

In the process of transculturation, the indigenous way of life is gradually being “colonized” by the urban way of life.

As a result, there is a confusion of values and how to behave in the world of the economy and community culture—and there is even a confusion about the relationship with nature, which has always been an intricate part of the indigenous way of life.

The farm and its benefits

The farm is a pillar of indigenous community life and subsistence agriculture.

It uses family labor, low technology, and mostly local inputs such as sprouts or selected seeds from previous harvests. Much of the produce is for family or community consumption.

Some fruit is also planted such as pineapple , papaya, cocona , avocado, lemon and camu camu .

The farm is a small productive area usually no more than five hectares, and it is located a slight distance from the house. Often indigenous people go to the banks of the rivers with their small loads of produce and negotiate with the regatones, those who travel the rivers in search of products to take to the market. Often negotiations are a simple exchange or barter.

Farm work is almost exclusively a female task although men are in charge of cutting down and burning the forest.

Women and the farm:

Women play a very important role in the life of the native communities of the Amazon basin .

They are in charge of preparing food; caring for the children, the elderly, and the sick; and planting and harvesting on the farm.

The chacra is feminine in almost all Amazonian groups.

Before planting, women generally offer the harvest to the female deities of the land.  For example, Nugkui Aren is the female deity of the Awayún people.

These deities are female spirits who are believed to have taught women to cultivate the land, to sow, and to distinguish the many varieties of cassava, peanuts, and sweet potatoes. The female spirits also taught them to make pots, raise wild animals, and to live and work in both the domestic and productive spheres.

Differences between the Family Garden and the Farm

The family garden is very different from the farm.

While the farm might be far from the community, the family garden is close to the house, and it fulfills various purposes.

In addition, the vegetable garden offers the house protection from the winds and heat and guarantees the existence of the most valuable and useful species.The family garden conserves agrobiodiversity. More importantly, it is a source of selected genetic resources, and it constitutes the “piggy bank” or wealth of the rural indigenous or peasant families ( 5 ).

5. Flores Paitan, S. (2000). Traditional agrodiversity in the department of Loreto and its contribution to food security and sustainable development in the Amazon. Felipe-Morales, C. Manrique, A. (Eds.). Agrodiversity in the Andean and Amazon region. Lima: NGO-CGIAR, 375-376.