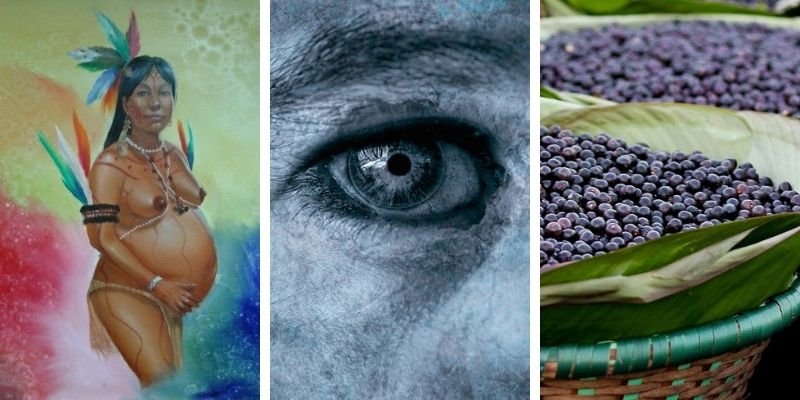 Both palms are the two species of the genus Euterpe, which has 49 other species, exploited in the Brazilian Amazon, where they are abundant.

The acai is easily recognizable in the lowland rainforest , where it grows, because its great height, from 30 to 40 meters, makes it stand out in the forest when it is flown over.

In addition, its long, hard, round stem ends in a plume or crown of thin, long, flexible leaves that give it the appearance of a green curtain.

The acai fruit is a cluster with drupes, which turn dark ripe when ripe.

By macerating these fruits, which have a pulp with purplish tones, they ferment easily, almost spontaneously, producing as a result a kind of thick wine with a chocolate flavor, which has become a very popular drink in large Amazonian cities.

This drink and the palm heart obtained from its terminal yolk are two staple foods in the Brazilian Amazon diet.

When reviewing the nutritional value of the acai, huasaí or acai, we realize its enormous nutritional richness, and its rightful fame as a prodigious food.

For every 100 g of edible pulp there is

One of the most beautiful legends of the Brazilian Amazon is associated with this fruit and its nutritional qualities.

The tragic legend of Icaí

A long, long time ago, in a place in the Amazon forest, near where the populous Belem do Pará now stands, there lived an indigenous tribe led by a chief named Itaki.

At that time the area was devastated and food was nowhere to be found.

Despite the enormous hardship and the resulting scarcity, indigenous women continued to have children, aggravating a crisis that was already unbearable.

The Council of Elders decided to prohibit new births, ordering that the newborns be sacrificed.

And so it happened. No more children were born and the population declined.

There were fewer mouths to feed, although not much more food had been produced in the forest.

In spite of the prohibitions, a girl was born, procreated by Icaí, daughter of the cacique Itaki.

Icai pleaded for his daughter’s life, but the council of elders was adamant, and ordered Itaki, her grandfather, to sacrifice her.

And so it was done.

Icai, distraught over the loss of her baby, locked herself in her hut for days, almost without food, and cried non-stop.

One day Icaí heard the cry of a child, and remembered his dead daughter. He opened the door of his home, and there was his little daughter, leaning against a large palm tree. She screamed with joy and ran out to hug her daughter, but only hugged the palm tree.

And there she stayed, hugging the palm tree, in the midst of her sadness, until she fainted and died.

Above, at the top of the palm tree he embraced, there was a cluster of almost black drupes, with which the natives of his tribe prepared a thick, nutritious and tasty wine, which saved his people, together with the palm heart born from its inflorescence or bud, from the famine that decimated them.

Shortages ended in the community and the elders allowed new births of children.

The grateful people called that palm tree acaí, changing the letters of the name of the bereaved dead mother.

Since then, acai has been one of the most popular beverages in the Brazilian Amazon.